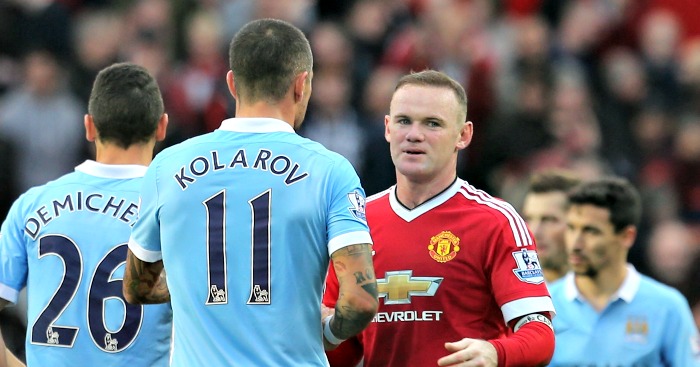 Manchester United’s game with Manchester City on Saturday is a rather large one, and so combined Manchester XIs – including this doozy from Jamie Jackson – have inevitably permeated this international week. But we’re basically hipsters, so how about something a little different? The Premier League season may be only three games old, but how about a combined worst Manchester XI? Players must have at least made an appearance on the bench in the league this season, and must be selected in their (almost) natural positions in a 4-2-3-1.

Frankly, this side would absolutely tart our combined Manchester United and Liverpool dregs XI of last season.

GOALKEEPER: Sergio Romero (Manchester United)
“I think the door to becoming United’s first goalkeeper is open again for me.”

Ever the optimist, Sergio. Speaking in July, the 29-year-old outlined his intention to challenge David de Gea for the position of Manchester United’s first-choice goalkeeper. As we all know, he has not played a single minute of football so far this season. In fact, since 2013 he has played just 47 games at club level – the exact same number he has played for Argentina.

RIGHT-BACK: Pablo Maffeo (Manchester City)
A Spaniard who shall hereby be nicknamed Dominic by yours truly, Maffeo is Manchester City’s outlier at right-back. Ahead of him in the current queue for selection at the Etihad Stadium are Bacary Sagna (33, 251 Premier League appearances), and Pablo Zabaleta (31, 212 Premier League appearances). At just 19, and without a single Premier League minute to his name, Maffeo could find game time difficult to come by. He did feature for the whole of City’s Champions League play-off round second-leg victory over Steaua Bucharest, mind. His presence is the only thing keeping Matteo Darmian out of this side.

CENTRE-BACK: Marcos Rojo (Manchester United)
Save for a central-defensive injury epidemic at Old Trafford, Marcos Rojo is highly unlikely to feature at all in the Premier League this season. The Argentinean can also provide cover at left-back, but that is cover in the same sense that a sheet of paper would provide cover against a gun. He made the bench for the opening-day victory over Bournemouth, but he has not even made the squad for the next two games. Hope you enjoy the Europa League, Marcos.

CENTRE-BACK: Aleksandar Kolarov (Manchester City)
There are two camps of thought when it comes to Aleksandar Kolarov. One believes he is a vaguely competent left-back and not much more; the other feels that he would qualify for a best combined XI of Manchester United and Manchester City players. The first camp is inhabited by over seven billion people; the second camp is home only to Jamie Jackson.

LEFT-BACK: Ashley Young (Manchester United)
When compiling this list, one thing was for certain: Ashley Young would feature. Whether it was at right-back, left-back, on the wing or as a striker – oh, those halcyon days – Louis van Gaal’s Swiss Army knife warranted a spot. The 31-year-old is unlikely to enjoy any meaningful game time this campaign, and acts as third choice at best in around four different positions.

CENTRAL MIDFIELDER: Fernando (Manchester City)
A player who made 42 appearances last season is a player who has enjoyed just two minutes on the pitch this season. If anything neatly sums up the difference between Manuel Pellegrini and Pep Guardiola, it is the amount of trust they have placed in Fernando. David Silva, Kevin De Bruyne and Fernandinho have all featured in central midfield for City this season, and each are at least one step up from the Brazilian. Add an Ilkay Gundogan, and Fernando better accilmatise to that lovely bench.

CENTRAL MIDFIELDER: Fabian Delph (Manchester City)
Read above, but remember that Manchester City’s midfield pairing is also up against Paul Pogba, Marouane Fellaini, Morgan Schneiderlin, Ander Herrera and Michael Carrick. An argument could be made for the latter two of that quintet to feature here, but it is Delph who gets the nod. After all, there is a reason that Guardiola has used Delph and Fernando as makeshift centre-halves in training at times this season. There is also a reason the more tactically adept and talented Fernandinho has been entrusted with the role in-game.

RIGHT-WINGER: Jesus Navas (Manchester City)
Let’s play a game. The following is part of a headline from a Daily Mirror story in April of this year. Try and guess how the headline ends.

Is the answer a) ‘…turning up to training in a race car’.

If you answered a) you would be correct. One suspects that the same would be true of b), of course. Three years into his spell at Manchester City, and the only thing penetrating about the Spanish winger are his eyes. But oh, those beautiful, gorgeous eyes…

Look, I don’t have anything in particular against Wayne Rooney – and nor does this website. He has started this season rather bizarrely for United, performing poorly, but producing moments of quality when it matters. But his inclusion in this list is difficult to argue when you consider his opposition. If you are presented with a choice of one of Rooney, Kevin De Bruyne, David Silva or Nolito, few would choose the Englishman. With Mourinho unlikely to use Ander Herrera as a No 10 this season and Guardiola even less likely to use Yaya Toure at all, it is Rooney who takes a perhaps harsh place in this side.

LEFT-WINGER: Memphis Depay (Manchester United)
It remains to be seen whether this campaign truly will be the reboot of Memphis Depay at Old Trafford. It feels as though the Dutchman has been at Manchester United for much longer than one season, such have been his struggles to make an impact. Two minutes of action in the Premier League has done little to change that.

Mourinho expected this, of course. The manager spoke of his “sadness” at seeing certain players not even make his matchday squad for the victory over Southampton in August. The first of the names he listed was that of Depay.

“I am desperate for September,” the manager added. “Because September we have Capital One Cup, we have Europa League, we have seven matches in September and they all play and then I am happy.” We are intrigued to see how he fits in. But for now, he is an obvious selection here.

The problem is that both Manchester clubs have largely rid themselves of the deadwood which harmed their respective seasons last campaign. Were Wilfried Bony still at City, he would be a certainty to make this side. But the decision is between Sergio Aguero, Zlatan Ibrahimovic, Rashford or Iheanacho, and the Nigerian is the unfortunate one to miss out. I’m not sure I could have survived the backlash of the angry mob had I selected his cross-city peer.