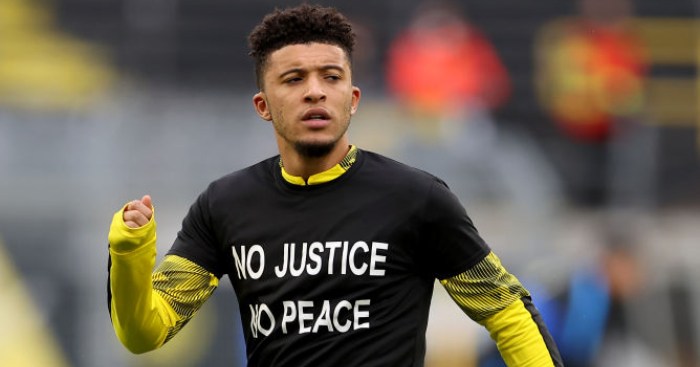 Ham shock
It is the biggest gossip of the day, but we have to question the Sun‘s use of the word ‘EXCLUSIVE’ and also the concept that ‘PEP Guardiola wants Manchester City to make a shock move for Harry Winks’.

We’re pretty sure that The Athletic‘s David Ornstein will not be too ‘shocked’ by the revelation that Manchester City are interested in Winks; after all, he wrote about it back in January.

Red missed
Exactly ten days after The Sun‘s Neil Custis told us that ‘‘there has been a breakthrough in negotiations as the Red Devils have forced the Germans into accepting staggered payments, with £70m up front’ – using the language of war reparations instead of transfer negotiations – he is back to concede that ‘BORUSSIA DORTMUND plan to keep Jadon Sancho for another year – to start a bidding war next summer’.

What wonderful language – carefully painting Dortmund as greedy (and war-mongering, playing exactly to the Sun’s usual stereotypes) and United as the wronged party, even though they – and this really does seem important – never actually bid anywhere close to the figure that the German club always wanted for their own player.

Custis even goes so far as to say that ‘the news will anger the Red Devils, who have been negotiating for two months and offered £70million rising to £110m’.

Anger? That seems entirely reasonable from a club that offered around 65% of the asking price and then briefed journalists that they had ‘forced the Germans into accepting staggered payments’.

Matter of interpretation
Over at the Daily Mirror, they have also been told that Borussia Dortmund are not interested in a cut-price deal for Jadon Sancho this summer.

‘United are likely to interpret the development as a ploy by Dortmund to force their hand and pressure them into bidding what the German club want this summer.’

Or they could interpret it as confirmation that Dortmund are still not going to accept a cut-price deal for Jadon Sancho this summer. Which the Mirror themselves were reporting way back in May.

Ah, but of course ‘Borussia Dortmund’s determination to keep Jadon Sancho in the news only strengthens the belief at Manchester United that they want to sell the England international.’ (Evening Standard). Of course it does.

Barking mad
The Daily Mail‘s Adrian Kajumba wrote on Thursday that ‘Manchester United’s move for Jadon Sancho is in danger of collapsing with Borussia Dortmund increasingly bemused by their approach to the negotiations’, detailing United’s passive pursuit of Sancho and their offer of an actual wage cut.

He included these paragraphs:

‘Liverpool, Real Madrid and Barcelona are among the other clubs who retain an interest in Sancho.

‘Some of his suitors, other than United, have indicated their willingness to arrange a deal for next summer, when they hope their finances will be restored, if a move for Sancho is not finalised in this window.’

By Friday morning, this is a headline on MailOnline:

‘According to reports’ in the Daily Mirror.

Why do all these newspapers keep dogs and then insist on copying the bark from next door 24 hours later?

It’s not unusual…
What’s this? A whole new angle on the Jadon Sancho farrago…

Unusual, you say? Is he going to play on the right wing? Is he heading to Borussia Dortmund in part-exchange?

Or has Duncan Castles said that Manchester United could sign a left-back and then have “the option to move Brandon Williams to right-back as a back-up to Aaron Wan-Bissaka”?

Something here is certainly ‘unusual’. And dodgy as f***.

…and then write that ‘Not to rain on any parade here but as reported by the ECHO last night and in recent weeks, our current understanding is that Thiago is not an active target at this time’.

Happy to take those sweet, sweet clicks though.

Oh and as of 11am on Friday, the promised ‘Ismaila Sarr latest’ is that ‘Liverpool continue to be linked with moves for Thiago Alcantara and Ismaila Sarr so stay turned for all the latest news concerning the Reds throughout the day’.

And that, ladies and gentlemen, is ‘Liverpool news and transfers LIVE’.

Reach for the clicks
Mind you, this is not a tactic only used by the Echo, with this appearing on the Mirror website on Friday morning…

Three days ago, his brother winked.

Fishing headline of the week
‘Liverpool Keep or Dump: Should the champions sell captain Henderson?’ – ESPN.

What’s in a number?
There is a bizarre trend of obsession with shirt numbers, which are surely only of interest to small children and imbeciles.

‘Willian is expected to join Arsenal having confirmed his departure from Chelsea with the next question being what shirt number the Brazilian will take at the Emirates.’

The ‘next question’ if you are a fool or a child, yes.

‘Current shirt number vacancies in north London include six, 12, 13 and 25 but it is thought that none of those will jump out at Willian.’

And yet he still took the no. 12. Because he is an adult.