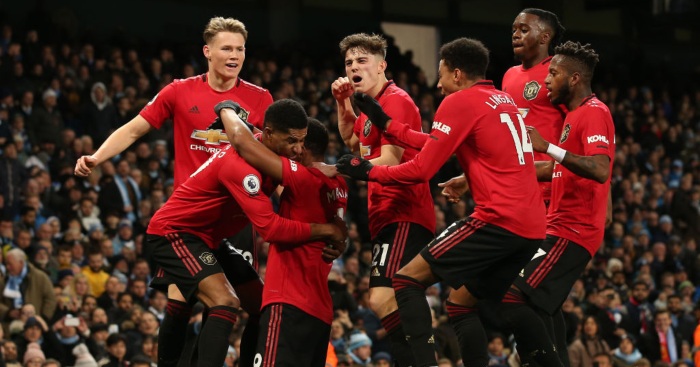 Selfish allergy
Manchester United beat Manchester City 2-1 on Saturday. So of course this is exactly the time for Martin Samuel of the Daily Mail to ask if they want to become the new Arsenal. What better time could there be?

‘It’s up to them now. What happens from here depends on Manchester United’s players. Do they want to emulate their manager, revered for his selfless contribution to a team that set the highest standards. Or do they want to be Arsenal, costing good men their jobs in an arena bubbling with anger and frustration.’

‘Any team who can perform as United have done these last two matches, who can play a resurgent Tottenham off the park, who can go to the home of the champions and be better, pretty much start to finish, are capable of more.

‘Manchester United this season have now beaten Leicester, Manchester City, Chelsea and Tottenham and drawn with Liverpool. They have also lost to Crystal Palace, West Ham, Newcastle and Bournemouth and drawn with Aston Villa.’

Yes. We know all this and the common consensus is that it’s about tactics. As Jose Mourinho noted last week:

“You look to United’s results against the best teams – they’ve had good results. I think at home when they play like they did against Chelsea, Liverpool, Leicester, also a great team this season, they also had this kind of attitude.

“Then lots of young people with lots of energy, with a good mentality, when they are winning matches they are comfortable in this situation of low block, with a giant dominating in the air. And being fast in counter-attacks with Marcus, James, Jesse with Martial, when he plays.

“I think the way they play it’s easier for them when they play against teams that are better teams, teams who want more of the ball, who want to have initiative of the game.”

Tactics, schmactics. Samuel is having none of it. He wants you to think it is all about ‘selfishness’. Yes, selfishness. This Manchester United team are not beating those teams in mid-table and below because they are selfish.

‘This smacks of selfishness – a group who can find their game once illuminated by the precious spotlight, but are not prepared to do the hard yards, the low key, the week in, week out. Arsenal have been like that for years now.’

The same Arsenal who have not won away at a Big Six side since January 2015? That Arsenal? Yes, be careful you don’t turn into Arsenal, boys.

Ladies and gentlemen, we have a new crisis club
‘PEP GUARDIOLA insists he has no plans to rip apart his fallen champions for a major rebuild’ is a back-page story on The Sun, because of course second-placed Leicester City winning their eighth straight Premier League game is basically not in the slightest bit interesting. Not when there’s some ‘insisting’ to be done.

And for a clue as to why a) Guardiola might be so insistent and b) this is not a back-page story, you need only look as far as the third paragraph and the fact that these players ‘have won five of the last six trophies for him’.

When Guardiola says he is going to chuck a team of multiple title winners out of the f***ing window, then come and talk to us about a back page.

Coulda been a contender
In the ‘Goals’ section of The Sun, Graeme Bryce is at least allowed to write about Leicester City. Though pretending that Leicester are suddenly title rivals is ridiculous; there is still an eight-point gap and Liverpool are still unbeaten in 33 games since January.

‘SOMEBODY better break the bad news to Jurgen Klopp and his boys.’

There is no ‘bad news’ fella; they are eight points clear at the top of the Premier League in early December and they are unbeaten in the top flight since January.

‘No sooner had Premier League hopefuls Liverpool seen off one squad of title-chasing champions, in the shape of Pep Guardiola’s Manchester City.

‘Than an even more dangerous set of former champions stepped into the ring to throw down the gauntlet and mess with their heads.’

The gap is eight points. We don’t feel like we should have to keep repeating that.

‘They are now the undisputed No1 contenders to wreck the Kop club’s 30-year wait to be crowned champions of England.’

Tell that to literally all of the bookies, who still have ‘fallen champions’ City as second-favourites at around 8/1. Leicester? The club apparently ‘messing with the heads’ of Liverpool? They are pretty much 14/1 shots across the board. In layman’s terms, it has been calculated that Leicester have a one in 15 chance of winning the title from their current position.

‘Leicester fans are beginning to believe Liverpool supporters may never get to sing that chant after Brendan Rodgers new-look side strolled to their eighth straight Premier League win on the spin.’

Behave. They’re eight (or EIGHT, in tabloid-speak) points behind. Leicester fans are really just happy to be 14 points ahead of Manchester United and bound for the Champions League.

Everything is roarsome
Quite why it’s now – after a 4-1 win over a poor Villa side – that Leicester are being declared title challengers is unclear, but the Daily Mirror are also getting in on the act with a headline of ‘WATCH OUT KLOPP’ with a claim that Jonny Evans has ‘roared’: “We’re contenders.”

First of all, Jonny Evans has never ‘roared’ anything in his life. And secondly, what he actually said was that “it’s good to be talked about as contenders”. Try ‘roaring’ that and you will soon hear what a prick sounds like. Jonny Evans has seen the table and knows they are eight points behind. Saying “we’re up there” is one thing; he did say that. But has he suggested that Leicester can win the title or that Jurgen Klopp should ‘watch out’? Has he f***.

But it’s catching as the Daily Mail go even further, with a back-page headline of ‘WATCH OUT KLOPP, WE CAN WIN THE TITLE’.

Said nobody. Ever. At All.

Well, nobody apart from this fella:

Watch out @LFC, The Foxes are on your tail.

And what does he know? Stick to football politics.

Hot take
And this is why The Sun pay Alan Shearer the big bucks:

‘I REALLY can’t see how Manchester City are going to get back into the title race now.’

You simply can’t buy (actually you can) that level of expertise.

Have a little patience…
You can definitely buy Stan Collymore’s level of expertise. And the Daily Mirror inexplicably have. His solution to the managerial merry-go-round is to give bosses longer contracts. Yes, longer contracts.

‘Given the current turnover of managers, is whether we will now start to see more and more clubs handing out maximum one-year contracts when they hire a new gaffer in a bid to protect themselves from such hefty pay-offs. It would certainly make financial sense, given the fact some clubs have nearly bankrupted themselves paying compensation to managers, which is a ridiculous state of affairs.

‘The only problem with one-year contracts, though, is that ultimately the best managers will start asking for two or three times what they would charge over the course of a two or three-year deal to compensate for the lack of long-term security.’

Well that’s not the only problem. There’s also the small matter of good managers leaving for other jobs after a year and leaving the club entitled to no compensation at all.

‘And, while that might become the norm for a while, I’d go the other way if I was a chairman by handing out proper, long-term deals.

‘Liverpool weren’t exactly flying when they handed Jurgen Klopp a six-year contract in 2016, were they?

‘But they are now and that move looks genius.’

Firstly, Liverpool had reached two cup finals in 2016. And it was very, very obvious even at that juncture that they were going to improve.

Secondly, for every Jurgen Klopp there is a David Moyes (six years) and an Alan Pardew (eight years). Handing out long-term deals only looks ‘genius’ if the manager is successful, Stan.

‘Success, however relative, is built on strong foundations.

We’re looking and seeing Burnley in 13th and Bournemouth in 15th. This is not the right time for those kind of examples.

‘And when the contract is signed, they need to give their man the time he needs to make them a club to be reckoned with again.’

Which is odd because it is literally a week since he was advocating anything other than patience for Marco Silva. Is it only British managers and Klopp who should be given patience?

Mind you, a lot can change for Stan in just a few days.

On December 1, Collymore was advocating that Howe could replace Silva at Everton, who ‘could do with that (Howe’s) kind of thinking’.

By December 4 he was tweeting this on the very same subject: ‘I’d have said Howe, but the more I look at the body language of the players and see fan discontent, I think a bigger personality is needed. Job may swallow EH. Someone you can believe in and take to the bank that the whole club, not just team, has a coherent plan for 5 years.’

You did say Howe, Stan. And by December 8 you are advocating that Everton give a really long contract to anybody at all except Marco Silva or David Moyes.