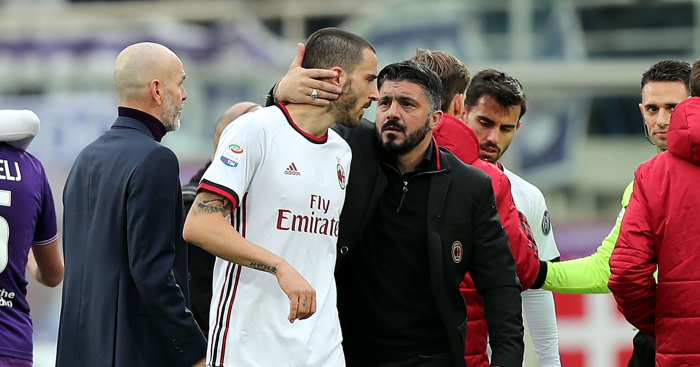 Bonucci has been identified as one of three central defenders Man United want this summer, with the Daily Mail also naming Harry Maguire and Toby Alderweireld.

The 31-year-old Italy international moved to the capital club from Juventus last year, but could only take them to sixth place in the Serie A, and Europa League qualification.

He is now thought to be considering his options, with Milan manager Gattuso confirming he has held a conversation with the player over his future.

“I’ve spoken to Leo and you need to be honest and say things as they are,” he said.

“Leo had a meeting with me, but I am not the club and he needs to talk to the directors.

“Until he leaves my dressing room, I want to see the Bonucci I’ve seen over the last 12 days – a professional Bonucci, he is the first to push the group and he is behaving as a great captain.

“Then it will be up to Leo and the club to decide, but I hope that Bonucci can stay here. He is a player with mentality and talent.

“I think that when a player expresses a desire, the coach must do all he can to convince him to stay.”

Too rare to care? Can Rafael Nadal and Roger Federer still be considered rivals? (Tennis365)