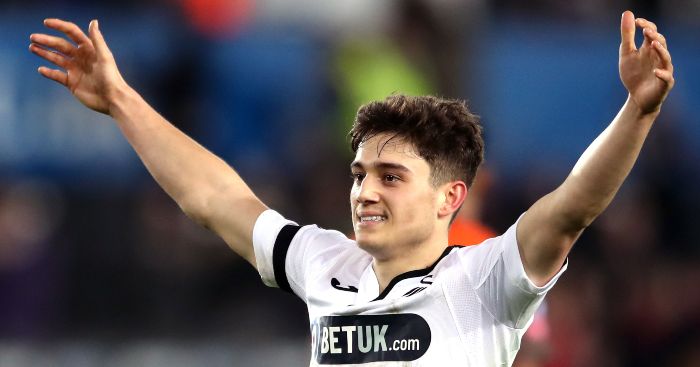 Manchester United are ‘delighted’ to have agreed a deal ‘in principle’ to sign Daniel James from Swansea.

James will complete an initial £15m move, which could rise to around £18m, next week.

United confirmed that the winger ‘has successfully completed a medical at the Aon Training Complex,’ and ‘further details will be communicated’ in due course.

Swansea rather handily state that the deal is likely to go through when FIFA’s international transfer window opens on June 11.

James will be Ole Gunnar Solskjaer’s first signing as United manager, following in the footsteps of former Football League footsteps of Nick Powell and other such luminaries.

The club have already ‘earmarked’ him for a specific position, and are reported to have offered a £67,000-a-week, five-year contract.

Wales manager Ryan Giggs, who gave James permission to undergo a medical while on international duty, feels he will fit in at Old Trafford.

“I know the United fans will get behind him and enjoy watching him,” he said.

“It’s fantastic for everyone I think – for Dan, for Manchester United, and it’s a good deal for Swansea as well.

“It’s the biggest club in the world so my message to him is enjoy the challenge, don’t be anyone else, and you’ll be fine.”