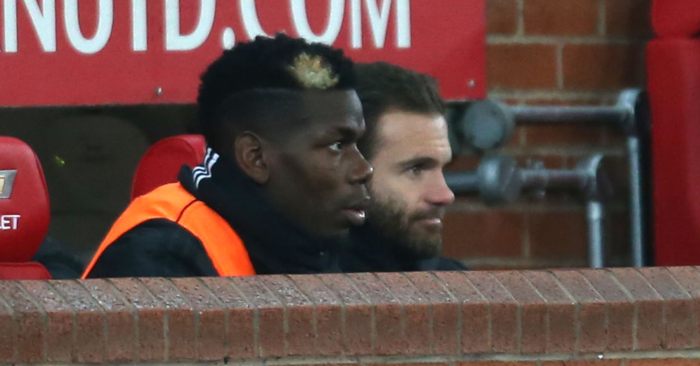 That Man United bench could be spectacular. Watch the game and send your mails to theeditor@football365.com please.

How deep is your squad?
And we’re back.

How can you not be excited by this team?

Man United have a defence, a midfield and attacking options that are each in the top three in the league. The squad is deep with the return of all the players. Romero, Bailly, Dalot, Williams, Fred, Mata, Pogba and Ighalo could all be a part of the bench. The question is of course on how it all turns out on the pitch. Solkjaer’s blueprint has been taking shape slowly but surely, and comfortable victories against weaker teams were a welcome change, alongside the counter-attacking wins against the stronger teams. And this is among the youngest Premier League squads around, and certainly United’s youngest ever in recent memory.

Who knows what will happen in the restart game? I’m sure Chelsea and Spurs are both teams that are raring to go with a lot of talent that has had time to recover from injuries. But I’m counting on United to get that fourth place ahead of Chelsea primarily on the back of better striking options.

For what it’s worth, I don’t know if I want to see Pogba and Fernandes together against Spurs, as it would leave too much space behind them for Spurs to exploit. I’d like to see two holding midfielders to ensure Son and co don’t get free runs against the defence. Pogba as a 70-min sub when Fernandes starts to tire would be an awesome option in a game like this.
Ved Sen (MUFC)

How to make the coverage better
Can’t remember who wrote the article on disliking the NRL’s ‘fake’ crowd noise and the need for the PL to embrace the silence, but it was bollocks and those first two weeks of German football should never be repeated.

Watching on Wednesday night my issue wasn’t the presence of recorded crowd noise/chanting, it was how absolutely sh*t it was. I’m pretty sure the NRL noise is played over tannoy (which Martin Tyler seemed to indicate wasn’t happening at the Etihad) but even if done in studio – what we were given was dreadful.

Sound: The NRL games seem to be done by a sound mixer in the stadium and (presumably) employed by the home team. This fella/sheila doesn’t really play chants/songs but has a looped tape of background noise, which he escalates to background excitement as teams approach the try-line, adds an “ooh” if a big hit goes in and – most importantly – changes to a cheer if a try is scored (or if an opposition player f***s it.

Picture: Rugby League games are generally filmed from a lower angle so, for the vast majority of the game, you can’t see the pitchside crowd/lack thereof until a kick or conversion goes in. This proves difficult in football, where the camera angle is generally higher and zooming in would cause aerial balls from the far side of the pitch to disappear. For me, this is a small price to pay not to see City’s shit banners all game long. They also did the fan cardboard cut-out thing and someone sent in Dominic Cummings – so that too, please.

Commentary: Now NRL commentary is filled with giddy idiots and I’m not suggesting bringing the talksport lot onto Sky/BT, but… the presence of a third commentator – and the ability to flick seamlessly back with studio guests – allows for greater contribution than having Jamie Carragher play a really sh*t game of where’s Wally. Once Luiz had lost the game you could see Tyler and Neville were desperate/struggling to fill the silence. Add a third commentator, give them discussion points for utterly dreadful patches of football, all else fails go back to Souness and ask him about Pogba’s tweets on BLM.

No matter what, this is going to be f***ing awful, but might as well make the best of it.
Simon MUFC

Alright Jack
Cheers Jon, Cape Town – after all the good work done by Marcus Rashford recently it’s great to have the fans back to remind us all why we dislike Man Utd so much. Grealish doesn’t look much better than Pereira? Even if you haven’t seen much of Grealish this season you surely can’t have missed the goal he put in the top corner at Old Trafford earlier in the season (although David de Gea didn’t see it either to be fair). I’ve seen plenty of him this season and he’s more than capable of playing at the top level – writing him off after playing his first game in three months is a slight overreaction.

Different clubs, different outcomes
Let’s just say that if it had been Chelsea/Man Utd/Liverpool having a goal refused by HawkEye, we would have had either of the following:

Sheffield United and Chris Wilder, on the other hand, have grumbled and suitably protested in the expected low-key way of theirs, will pick themselves up and get on with it, aiming to reach the best possible league position and possibly a European qualification.
Mike, CFC (yes my own club and its fans would have been one of the worst)

Dear Minty…
Minty Old Boy, I appreciate that yours is the only club with (ahem) a ‘real’ fanbase but the whole point of my earlier mail was to highlight the distinct possibility that, if they were able, broadcasters and some owners would televise games without the slightest concern for the wishes of the same fanbase. Don’t tell me that the owners of the likes of Newcastle, Derby, Charlton or, indeed, Bury FC (just off the top of my head) give a flying f*ck what the fans think. On that note, I apologise for not making clear in my original mail that I was specifically referring to PL and CL clubs. My bad.

As for broadcasters fans are, basically, a pain in the arse and they definitely tarnish the ‘product’. They fight outside grounds and punch Police horses. They fight inside grounds. They ambush the away team coach on the way to the stadium and smash it up. They throw lighters and coins and set off flares. They invade the pitch and try to confront players.

They sing songs about Munich and Hillsborough and bombers in WWII. They will chant about people they suspect of having a different sexual orientation, and not in a good way. And should a female assistant referee or steward hove into view they will make loud, explicit, and disgusting sexual queries of her that nobody else listening, let alone the kids that hear it, should be subjected to.

If things aren’t going their way, then they are apt to unfurl large banners with unpleasant messages on them, or wave green and gold scarves or have a plane fly overhead with a derogatory message fluttering after it. And it doesn’t take much for this same fanbase, especially if you’ve just moved into a brand new stadium your club didn’t pay for, to want to physically storm the Directors box to get at the two men who run the show.

We’re still the only sport that MUST have a minute’s applause solely because we absolutely know that the f*ckwits amongst us would disgrace the dignity of a minute’s silence.

If social distancing had been abolished, how many people would‘ve crammed into Goodison Park on Sunday night? 40,000? Nothing more important to the whole of Merseyside I’m sure but from a broadcasters and advertisers pov, how many will be watching the same game, live, across the world?

I’m not saying that this will happen by any means (and even less that it should) but if the tech exists to create long-dead actors in a Star Wars film, then the ability to realistically simulate the sound of a full stadium certainly does. Imagine someone sitting at a console ready to hit the “Ooooohhh!” button when a thunder-bastard goes over the bar by inches or the “Hooray” button when somebody comically slices a pass or kick or the ironic cheer when the ref final gives a decision your way.

Interesting to see the screens up last night showing the supporters behind the goals in Zoom mode. How about that being the ‘new-norm’ along with 4,000 ‘selected’ family (and only family) supporters instead of 40,000 for each home game providing the ‘atmosphere’? All the good bits with none of the unpleasantness.

If you think that those paying the big bucks to those PL clubs that wouldn’t survive without it, whilst hiding behind the convenient excuse of social distancing wouldn’t jump at the chance of ejecting the hoi-polloi to produce a far more PC ‘product’, then either I’m over cynical or you’re quite naïve. After all, the whole world has literally transformed in the past few months and we already accept previously unthinkable changes to our lives as the ‘new norm’.

Oh, and to Gav, Edinburgh. You my friend, are a perfect example of why I personally love F365. You didn’t have to write that mail and it was kind of you to do so. There’s a JD and coke next to me which is about to be consumed after your name has been toasted.
Mark (Cheers!) MCFC

Thomas Muller special
No, it’s not the ability to always find space in a packed box, or always seem to be in the perfect spot to score awkward goals. Those are also qualities he has, making him one of the top goal scorers for both Bayern and Germany. For me, it the Muller cross. He has this cross he does where he is just on top of the 18 yard box corner. Its usually at the top right and he delivers inch perfect crosses for headers or even chest down then tap ins.

This move has been further accentuated in my mind because we had three weeks of just German football and I kept seeing it time and again, and now that the leagues are back I realized, nobody really does that. I can’t argue against Pep’s slide through that ends in a shot like the De Bruyne to Sterling move they did vs Arsenal, or the slide through, cut back that we have seen Aguero score so many times. I’m just surprised very few players do this because it seems so obvious. Most teams try and do the Pep move with little effect,or spread it wide and swing in a cross. Which has on percentage, very low success rates.

I liken this to a basketball midrange jumper. If Beckham is Steph Curry, with the ability to cross a pinpoint from any distance, Thomas Muller is like a Kyrie Irving with that mid range cross. I think players should try and develop that and just boost their assist stats. Anyway, I know there are other players that do it, but not many seem so willing or as successful the way Muller seems to be and that’s why I call it the Muller Cross.
Dave (There’ll probably be multiple examples of footballers who did this e very game, making me look a fool), somewhere

For me, it’s Eric Cantona. Helped United become the behemoth they are and a tad arrogant.

But what a player, and the arrogance was justified.
Aidan, Lfc (he’s also awesome in Inhuman Resources on Netflix)?