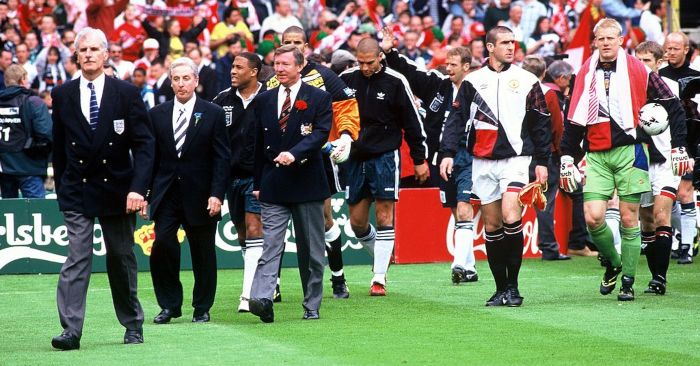 Steve Bruce has recalled leaving Man United “in a bit of a huff” in 1996.

Bruce joined Man United for £800,000 in 1987, signing from Norwich amid interest from Tottenham, Chelsea and Rangers.

The centre-half spent nine successful years at Old Trafford, winning three Premier League titles, three FA Cups, one Cup Winners’ Cup and a handful of other trophies as Alex Ferguson built a side that would dominate the English football landscape for decades.

Neville reveals United icon ‘that helped me the most’

But Bruce left Man United under a cloud in 1996, left out of the 1996 FA Cup final victory over Liverpool due to a slight injury, and rejecting replacement captain Eric Cantona’s request that he lift the trophy at Wembley.

Bruce, believing that opportunities would continue to be restricted as he neared retirement, opted to join First Division Birmingham instead of seeing out the final year of his Man United contract.

“I have to say I left in a bit of a huff as well, which I regret now,” he told Sky Sports.

“It was the cup final. And of course Trevor Francis jumped all over it and rang me practically immediately. It was probably Sir Alex’s way of saying look, go out at the top, whatever. Even until I was 36, I know I didn’t play in the cup final, I still managed to play 40 games that year.

“I didn’t want to become a bit of a bit-part player after captaining the club for five years. I didn’t regret leaving because I had a great couple of years at Birmingham. That prolonged me.

“But certainly leaving, it dawns on you to leave.”