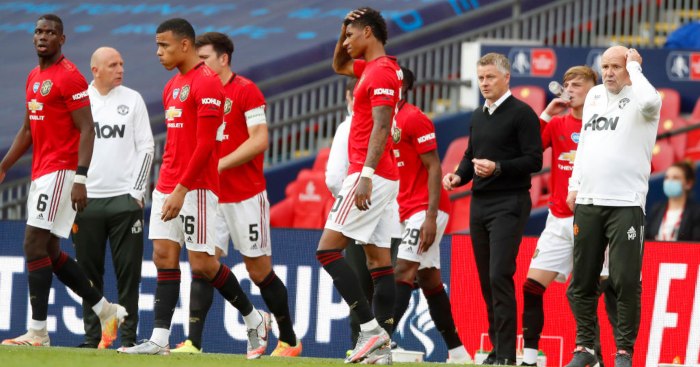 Monday night’s football prompted no mails at all. So we’re still talking Man United. Move that on by reading about our top ten and mailing theeditor@football365.com

Defending Victor, Harry and Ole
Ah F365 mailbox, the place to come for knee-jerk reactions, snap conclusions and over-the-top proclamations. If only football teams were run based on conclusions on one good or bad match. In many ways I think F365, as someone who always says snap reactions should not be made is often the one encouraging them.

Lindelof from one of the unsung heroes of Man United’s season is now apparently the player that needs to be changed for Man United to have a shot at any trophy. Luiz, from the embodiment of a mistake waiting to happen is now someone Arsenal can rely on after a few games.

For people who think Maguire needs to be replaced or we need to get a “refund”, try looking at the season not as a microcosm of one game. Maguire has already played his 50th game of the season, not missing a single minute of any game. Played through a injury for the last two months, picked up a knock which saw one of his CB partners stretchered off and still continued the game. Any top team needs a reliable CB and if you think Maguire has not improved our defence in a season where most of our CB squad depth has been perennially injured has clearly not been seeing United games in their entirety. Bailly, Jones, Tuanzebe, Mengi have all been injured for vast (almost entire?) portions of this campaign, any player playing so much football is bound to show some signs of fatigue.

Apparently most of the team that just went on a 19-game unbeaten streak (best since SAF) is apparently not good enough after one loss. The Ole out brigade is back in vogue and apparently Lampard and Arteta are footballing geniuses. Let’s not lose sight of the fact that Ole has beaten Lamps thrice this season already (one being a 4-0 drubbing on the opening weekend). This Arsenal side was under heavy censure and solidly mid-table before pulling out two good performances against Pool and City.

For people comparing Lamps and Ole, the Chelsea and Man United project isn’t even the same! Chelsea had their own problems to overcome this season with the transfer ban and getting the next set of academy players through. Ole had to clear out a lot of deadweight and change the attitude and expectation in the dressing room. All three young managers have had positives this season. Lets not sully it with toxic reactionary mails.
Yash, MUFC (Bring on West Ham!)

Sunday was not a sh*t-show actually
Such a stark difference in the afternoon mailbox to the morning. Were so many Man United fans surprised to see a back three having seen it work twice against Chelsea this season, nearly against Liverpool at home and three times against City? Will’s article (you mean Matt – Ed) too made it sound like all of a sudden those results are meaningless because United lost one out of four against Chelsea. United also have the second best defence in the league and without De Gea errors vs Watford, Everton, Bournemouth and Spurs would be a comfortable second on their own.

Will (Matt – Ed) praised Lampard for beating the top seven in all comps, does it mean nothing that Ole has taken 16 points from a possible 21 against the four teams above them in the league? All we learned is that United don’t currently have strength in depth to challenge across all competitions and since most people know that, we didn’t learn anything. The back three made more sense to go with if he was trying to rest players. It feels very much like if he lost by playing the team that has started most games since the restart, everyone would be saying “obviously they were exhausted, it was naive to play that way”. People also seem to forget that Chelsea are also a good team, United were hardly runaway favourites.

Lastly, akin to the point above, is that even Fergie only won the FA Cup five times or once every five years on average. It’s hardly a given thing. It’s not doomsday losing a semi-final to Chelsea, he’s already proven how he wants to play when he has players of the right standard; he’s already proven he can beat good teams but that doesn’t mean that he will beat them every time, no matter what the circumstance.
James, Galway

Koulibaly on my mind
I have never understood what the fuss was about in relation to Harry Maguire and, in particular, why Man United paid so much for him. Instead of doing post-mortem on his performances at United, I would rather use your popular and effective forum to advise United to do whatever it takes to bring Kalidou Koulibaly to Old Trafford Period. We need a more effective central defender than Maguire and Lindelof and Koulibaly is “the one”.

Best wishes to you all at football365.com from Australia. Keep up the good work.
Professor David Achanfuo Yeboah

There y’are.
J, The Shire

You what?
Almost did a spit-take with my afternoon coffee when Schlomo Jenkins intimated that Merseyside-born ‘Tranmere fan’ Mike Dean was biased in favour of United.
Andy (MUFC)

Bale talk
I am confused about the Gareth Bale situation. If Zinedine Zidane is not going to play him for the next two years (which is how long he has left on his contract), then why don’t Real Madrid pay up the rest of his contract (a reported £30M) so he could leave on a free this summer? That would make the most sense. Real Madrid would be writing off a £100M footballer in his prime, but maybe it would be for the best. Perhaps Bale thinks he’s past it though. Maybe he doesn’t think he can cut it in a top league any longer. If so, then he should see out his contract and then retire. The thing is, it’s such a shame. With Cristiano Ronaldo gone and Bale at peak age, this is his time. He should be starting every week and he is still better on paper than any of their current starters. I can see Zidane leaving the club soon though despite their league win as I expect Manchester City to progress. James Rodriguez appears also to be in a similar position, as do Philippe Coutinho and Ousmane Dembele at Barcelona.

He’s too good for China, and also too good for any other leagues other than the Premier League. Besides, Bayern have just signed Leroy Sane. Juventus have Ronaldo and Dybala has just signed a contract extension. PSG might be possible, but they have just signed Mauro Icardi. I could see Manchester United opening the chequebook as they do lack a right sided forward. To me, it makes the most sense to sign for Tottenham. A front three of Son, Kane, and Bale would be brilliant, and I can see Bale wanting to work with Mourinho. I can’t understand Zidane’s position though. By all accounts Bale is a great professional and a great lad. Is Zidane prejudiced? Is he actively discriminating against Bale? Is Zidane jealous at Bale’s personal success? Is Zidane wanting to still be the only star at Real? It is difficult not to conclude that this is personal and if I were in Bale’s position I would find it hard to accept. If I were Bale, I would seriously consider writing off the money and move clubs, and not wasting the best years of my career.
Rich (he’d be very welcome at The Hawthorns), Cambridge