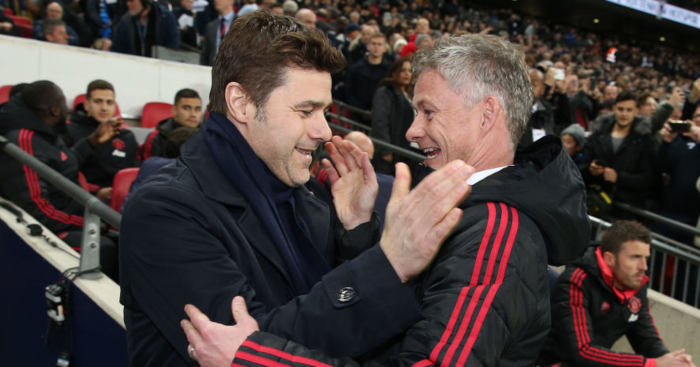 This is the greatest…oh
‘Liverpool barely had time to catch their breath before the reality started to sink in. Whatever happens in the final against Ajax or Tottenham, they have just played their part in football’s greatest game’ – Neil Ashton, The Sun, May 8.

‘This was Liverpool-Barcelona and then some’ – Neil Ashton, The Sun, May 9.

‘And then some’ on ‘football’s greatest game’? Sheesh. Imagine if you had followed up on your (excellent) request…

Sincerely yours, Stan
‘If you are Spurs manager and you have had the trophy drought they have had for the size of club that they are you have got to be looking at the League Cup or the FA Cup.

‘Actually, anything you can get your hands on – just to get fans ticking over and give them a bit of excitement ahead of moving into a new stadium.

‘And although virtually everything Poch says I end up nodding my head in agreement to, on this one I was a bit disappointed.

‘He should have said “I’m annoyed, I’m gutted, this is going to completely spoil my weekend and we wanted to win this one. We have a great tradition and history in the FA Cup.”

‘And if he had said that he would have had a lot of people going “yes, they haven’t got the biggest of squads but that is one they should have been going for.”

‘But instead he said such trophies are for vanity.

‘And a manager that wants to go on and manage Real Madrid, Manchester United, or any one of the big boys, should be talking up every single trophy including the League Cup.

‘You have to have a squad of 22 arguably world class players that mean if you have 11 injuries you can bring in 11 players of the same calibre and Spurs can’t do that.

‘It is a noble exercise him saying at the start of the season that Spurs’s priorities are the Premier League and the Champions League, but there is no way they are going to win them.’

Masterful
Stan is hardly alone, of course. Hell, a site not a million miles from here likely dismissed Tottenham’s chances of winning a trophy at some point this season. It is just plain weird that they are in a Champions League final.

But spare a thought for Samuel Luckhurst of the Manchester Evening News. He wrote the following, funnily enough also on January 29 (Tottenham had just played a weakened side in their FA Cup fourth-round defeat to Crystal Palace).

‘There is a mentality issue at the club dating back to the black and white days of Bill Nicholson that were appropriately referenced by Mauricio Pochettino on Friday. Then he spoke after another domestic cup elimination on Sunday.’

There didn’t seem to be much of a ‘mentality issue’ on Wednesday. Hmm.

‘The debate began some time ago and it is starting to feel it is not the winning that counts but the taking part with Pochettino. If he were on Twitter, he would be bombarded with gifs of Bart Simpson handing him a cake iced with the words ‘At least you tried’.’

Oh, that is delicious.

‘On the topic of memes, a month ago it would have been you and the guy they told you not to worry about. Only Ole Gunnar Solskjaer has become a worry for Pochettino, who gave the interim United manager an open goal at his pre-match press conference on Monday. True to form, Solskjaer did not miss.’

And it somehow only gets better! Mauricio Pochettino will definitely be ‘worried’ about Ole Gunnar Solskjaer on Thursday morning. If only it wasn’t ‘the winning that counts but the taking part’ with the Spurs boss.

Hindsight has never been so unkind. A reminder that this was only written 101 days ago.

‘It is understood that Pochettino is interested in the United job but it is becoming a losing battle. In fairness, ‘being consistently in the top four and playing in the Champions League’ ticks the Glazer siblings’ boxes. Only the incumbent United manager will not settle for that and nor will Solskjaer’s followers. That includes the United players.

You hear that, Mauricio? ‘Solskjaer’s followers’ simply ‘will not settle’ for a Champions League final. If only you were a ‘masterful man-manager with tactical acumen who is readying his players for a championship challenge next season,’ eh?

United front
Luckhurst has actually penned a fresh article on Pochettino, Solskjaer and Manchester United for the Manchester Evening News on Thursday morning. This should be bloody good.

‘Why Manchester United overlooked Tottenham coach Mauricio Pochettino as their next manager,’ reads a headline with plenty of promise. Is this the mea culpa? Or is it time to completely ignore your hatchet job from just over three months ago and pretend that the decision was pretty much down to finances?

‘Manchester United partially opted for Ole Gunnar Solskjaer over Mauricio Pochettino initially over the exorbitant compensation package he would have cost.’

Luckhurst then says Solskjaer was picked because he represents United’s ‘three pillars of success,’ and it would have been ‘almost impossible’ to tempt Pochettino to Manchester.

It’s a wonder they even contemplated trying. Did they not realise they had ‘the choice between a masterful man-manager with tactical acumen who is readying his players for a championship challenge next season and another who is focusing on Champions League qualification’?

You keep telling yourself United made the right decision, fella.

Who are you trying to Kidd?
At least Dave Kidd, The Sun‘s chief sports writer, is here to treat Pochettino with some well-earned respect, free from the shackles of having to view everything through an Old Trafford prism.

He credits Pochettino with Tottenham’s ‘extraordinary spirit,’ noting that ‘even reaching the Champions League is overachievement when you have just the sixth biggest budget in England. And for four years in a row, especially so.’

Pochettino is described as ‘a man renowned for overachieving on a limited budget and blooding youth,’ who ‘has achieved this extraordinary feat to a backdrop of squad-trimming’.

All in all, that doesn’t sound too bad for ‘a managerial veteran’ who ‘has won nowt‘.

Moura the same
Does Kidd’s piece adorn the top of The Sun‘s football homepage? How about Neil Ashton’s article? You surely can’t send both – and match-report writer Paul Jiggins – to Amsterdam and not give their work priority…

Top of The Sun's football homepage after one of the most surprising, sensational comebacks in Champions League history?

Have The Sun also produced an article featuring 17 pictures of ‘smart cookie’ and ‘looker’ Larissa Saad (and one of Kendall Jenner), only six of which include Lucas Moura himself? You bloody bet. And have they given that the rather misleading headline of ‘Meet Larissa Saad the gorgeous Wag of Tottenham’s hat-trick hero Lucas Moura’? Absolutely.

Mediawatch sincerely doubts she has given her consent for such a weird gathering.

Explanation of the day
‘Mauricio Pochettino explains why he broke down in tears after Tottenham’s win – Daily Mirror website.

Because they just reached a sodding Champions League final. With Moussa Sissoko in midfield and Fernando Llorente up front. And no new signings since January 2018.

‘Cost’ of the day
‘REVEALED: Liverpool cost themselves a £5MILLION windfall by beating Barcelona, because Coutinho’s transfer fee included the huge add-on if the Catalans won the Champions League this year’ – MailOnline.

Jurgen Klopp will be absolutely furious.