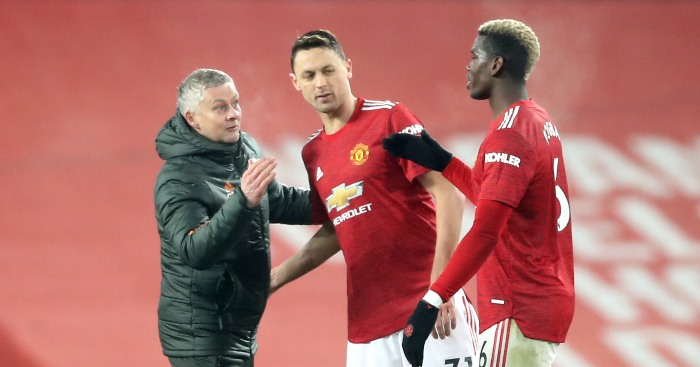 Refusenik
‘Solskjaer insists United aren’t in the title race as late Rashford strike sends Reds second’ makes Ole Gunnar Solskjaer look a tad silly on the back page of the Daily Mirror. Apparently ‘he refused to accept Manchester United are in the title race’, which sounds pretty bloody stubborn in the circumstances.

Except he didn’t do any of that, did he? What he did is say that “it’s not a title race after 15 games”. So it’s not that he ‘insisted United aren’t in the title race’ but rather he insisted that there was no title race at all. Which is rather different but presumably less worthy of a back-page headline.

I wish I was special…
Manchester United clearly are in a title race (if you accept that a title race exists) and the Manchester Evening News are more than happy to embrace that situation. As they should. Which is how we end up here…

Now that is a headline that initially confused us, until we reached the sixth paragraph and United’s unique quality was revealed:

‘They’re also in the midst of doing something that the rest of their rivals have struggled with in a season that is testing consistency and reliability like no other.

‘After losing to Arsenal at Old Trafford at the start of November United had won just two of their first six Premier League games. But the trip to Everton sparked the side into life and since then they’ve been on a nine-game unbeaten run, with seven of them won.

‘Nine-game unbeaten runs will be like gold dust this season and while the points garnered in that two-month stretch will be invaluable, what it has done for United’s confidence is something that can’t be measured, other than in moments like Rashford’s winner and the way belief never wavered, despite the difficulties of breaking down a side have proved a constant thorn in the side for Solskjaer’s United.’

Ah, so the thing that ‘Manchester United are doing’ that ‘their title rivals are failing at’ is putting together a nine-match unbeaten run in the Premier League.

Chelsea did not seem to be ‘failing at’ putting together an unbeaten run when they put together their own nine-match unbeaten run (during which they even managed to stay in the Champions League).

Oh and does anybody want to tell them that Liverpool are unbeaten in 11 matches? It feels kind of pertinent.

Computer says no
Well, we thought Manchester United were in a title race until we clicked on the Express website and saw that…

‘Liverpool will retain their Premier League title in style this season, according to a supercomputer which predicted the final standings. Aston Villa are predicted to surprise everyone and finish in second place, while Manchester United are predicted to miss out on European football.’

And we absolutely trust a supercomputer (this time belonging to footballwebpages) which has calculated that Manchester United – in the middle of an unprecedented nine-match unbeaten run, remember – have an 8.3% chance of beating Aston Villa on Friday night. Which is considerably lower than Newcastle’s chances of beating Liverpool (24%) on Wednesday night.

Does the supercomputer need switching off and on again?

Mediawatch loves in-depth tactical analysis so we were intrigued to find out that Paul Pogba played “higher up in the midfield” in the latter stages of a tight game poised at 0-0 as Manchester United chased a winner at Old Trafford.

How did Manchester United think of that?

SPOILER: He celebrated like his team had scored an injury-time winner.

Happy New Year
The Sun‘s Dave Kidd has been among the most vocal of Mikel Arteta’s critics – even before he had managed a single game – so he clearly did not enjoy his triumph at Brighton on Tuesday night, deriding the arrival of Alex Lacazette to the fray as not ‘the most visionary substitution’ even though he scored 21 seconds later.

He describes Arsenal’s revival as a ‘spluttering one’ and confidently declares 2020 to be a failure – ‘Arsenal have not enjoyed their first calendar year under Arteta, despite their FA Cup triumph’. So he might be interested to know that 2020 has seen Arsenal pick up points at a greater rate than 2019; they have actually been only three and five points worse than Tottenham and Chelsea.

Oh and we think they might have enjoyed their FA Cup triumph rather more than you did, fella.

To be quite Frank
But at least Mikel Arteta is not subjected to the same kind of abuse as Chelsea manager Frank Lampard, who is the victim of some kind of media agenda, according to talkSPORT host Adrian Durham.

Not for him the facts that Chelsea have spent over £200m and have actually got worse this season.

“I’m getting sick of this Frank Lampard negativity…it’s incredible. It’s truly phenomenal. So many people seemingly want him to fail. I don’t know if it’s an Arsenal and Spurs agenda or a West Ham-driven agenda via the media, I have no idea. Every little single thing that might go wrong at Chelsea, everybody comes down on Lampard like a tonne of bricks.

“Given the signings that they have made – lots of 21-year-olds in that squad playing a lot of football. If anybody seriously thinks that they’ve spent that much money therefore they are definitely going to win the title and if they don’t then he’s a total failure…you don’t sign 21-year-olds and expect to win the title.”

Well nobody seriously thinks that Lampard is a failure if Chelsea do not win the title; that’s a straw man argument right there. But Chelsea are in sixth place – with both Spurs and Manchester City below them with games in hand – and that has to be considered failure after spending like nobody was dying last summer.

And we are definitely not West Ham fans.

Forecast of the week
‘Marcelo Bielsa fun ride is in danger of hitting the relegation buffers’ – The Times.