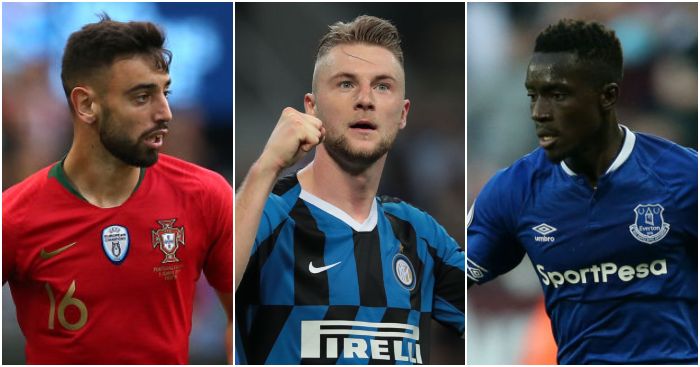 United have already made one signing in the form of Swansea winger Daniel James, who arrives from Swansea for £15m.

But after lobbying for a change in transfer policy, Ole Gunnar Solskjaer wants to deliver similar young and hungry recruits to rejuvenate his squad.

James Robson reported that story for the London Evening Standard, who have duly revealed ‘the complete list of players’ United will pursue.

It is headed by Aaron Wan-Bissaka, who United are ‘determined’ to sign. Thomas Meunier is referred to as a back-up option – although it is important to note he is not one of their 18 targets.

Five centre-halves follow, with Harry Maguire and Kalidou Koulibaly the most expensive. Milan Skriniar of Inter and Matthijs De Ligt are more distant possibilities, while Toby Alderweireld remains a cheaper alternative at £25m.

Solskjaer wants Declan Rice of West Ham to strengthen his midfield, with Sean Longstaff ‘a considerably cheaper target’ at £25m. Idrissa Gueye ‘is seen as an ideal replacement for Ander Herrera,’ with Youri Tielemans or Christian Eriksen lined up if Paul Pogba leaves.

United are said to be ‘perplexed’ by Pogba but insistent he will stay, while the Tielemans link was dismissed.

Robson adds that Solskjaer identified Borussia Dortmund’s Jadon Sancho as ‘his marquee signing’, but the manager has conceded he will have to wait until next summer to even stand a chance.