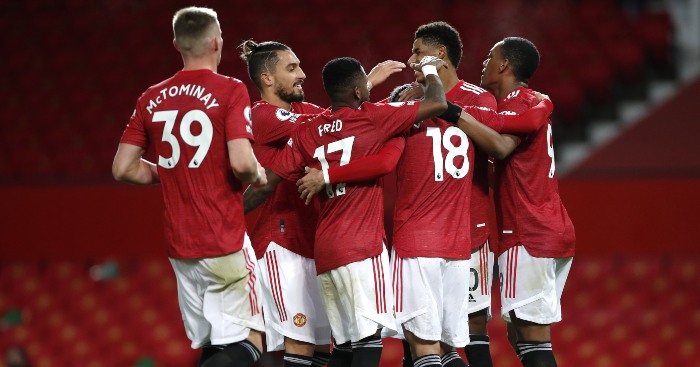 Slam dung
Manchester United beat Leeds United 6-2 and that really should be quite enough, thank you. Quite why The Sun had to pretend that Ole Gunnar Solskjaer had ‘slammed’ his ‘wasteful United strikers’ is a mystery only solved by expletives. He was clearly not a ‘frustrated boss’ after a 6-2 victory to go third in the Premier League table because that would be utterly ridiculous.

In, out, shake it all about
‘Yet this title is there to be won. Yes, even for Man Utd’ – Neil Custis, The Sun, November 23, after a 1-0 home win over relegation-battling West Brom through a re-taken penalty.

‘It could take 30 (years) for Man Utd to (win the title) as well’ – Neil Custis, The Sun, December 14, after a draw with recent champions Manchester City.

‘United had four by the break, six by the end and moved into the title race’ – Neil Custis, The Sun, December 21, after a 6-2 win over the team with the worst defensive record in the Premier League.

The man must have whiplash.

This means more
Over at the Manchester Evening News, they have no doubts that their beloved United are title contenders and declare:

No. After some painful reading it turns out that what Manchester United have done (that nobody else could) is admit they are title challengers as ‘David de Gea, Fred and Nemanja Matic have all publicly stated that they think they can win the league this season’.

‘That’s a considerable shift in strategy from what is occurring at Tottenham and Chelsea, two clubs who until this week had looked more credible challengers. While they’ve played down their ambitions, led by Jose Mourinho and Frank Lampard, United have been bold in not shrinking from their own unexpected ambitions. They’ve realised this season is an unexpected opportunity and rather than shy away from it, they are ready to embrace their status as challengers for a 21st league title, led by Ole Gunnar Solskjaer who is happy for his players to ratchet up the pressure on them.’

Is that the same Solskjaer who said after the victory over Leeds that “we’re a work in a progress. We’re getting better, fitter and stronger, but there’s still a few details to nail. Let’s talk about the title later on – the league position isn’t even something we’re looking at”? Is that the fella? Because that seems very, very similar to what has been said by Lampard and Mourinho.

Oh and about seven seconds on Google tells us that Harry Kane and Hakim Ziyech have been happy to talk up title challenges.

It’s almost like Manchester United haven’t done something that Tottenham and Chelsea couldn’t in Premier League title race, after all.

Work, work, work
Over on The Sun website, they have the obvious angle on Manchester United’s impressive victory over Leeds:

Mediawatch had to laugh as Jon Boon (of course) writes: ‘Hughes isn’t your typical Wag, either.’

This is confusing because Ria Hughes is obviously very attractive. And then we realise what makes her so atypical…

‘A sports instructor by trade, she shouldn’t have any trouble fitting in with the beautiful Maja Nilsson – the wife of Victor Lindelof and United’s other Wags.

‘The fitness fanatic worked at a local gymnastics club in Swansea before making the move to Manchester after James took the next step in his career in 2019.’

Ah. So she is not your ‘typical Wag’ because she has a job.

A woman! A job! In 2020! Does she not realise that she doesn’t have to work because her keeper makes so much money.

Exchange programme
And what of the Daily Mirror website? What is their angle?

Absolutely designed to make you think this was some kind of bust-up, this is actually about Cavani and Bielsa having a ‘friendly little chat’. Which obviously ‘sums up type of person he is’ because anybody else would have told the Leeds manager to ‘f*** off’ for having the temerity to speak to him on the touchline.

Interesting use of quote marks there, especially with such an emotive word as ‘liar’. Did Roy Keane use that word? Did he balls.

What he did say was “I don’t believe what McTominay said at the end about not looking at league tables”, which is a million miles away from calling someone a ‘liar’.

And talking of league tables…

And he ‘told’ Liverpool via the medium of a press conference in which he never mentioned Liverpool. An e-mail would have been better.

Coulda woulda shoulda
Obviously, that last headline is a contrivance born of the desire to crowbar Liverpool and Manchester United into one headline. Which is how we end up here on the Daily Express website:

First of all, they are quoting nobody with that ‘plans’ word; their source is the same source quoted elsewhere: Salah’s close friend Mohamed Aboutrika, who said “in my opinion, Liverpool are considering selling Salah for economic purposes” despite there being genuinely no evidence to support this theory. We can probably credit Aboutrika with some insight into Salah’s current state of mind, but Liverpool’s financial position? Not so much.

But why let logic get in the way of this kind of dynamite slug: Liverpool-Mohamed-Salah-transfer-news-Manchester-United-Jadon-Sancho?

Because of course the ‘big trouble’ that could come Manchester United’s way if Liverpool sell their leading goalscorer is that they could try to replace him with the player United failed to sign in the summer. A real fear if you are a catastrophist with an eye for SEO.

And if you are thinking that we really should not have used ‘could’ twice in one paragraph, it’s worth noting that Jack Otway typed the word ‘could’ 11 times in the writing of that utterly nonsensical piece. It’s almost like it’s bollocks.

Brit of alright
Mediawatch had to check after reading the headline of ‘A BRIT SPECIAL: Lampard and Moyes bossing it’ in The Sun, but we can confirm that Chelsea are indeed still eighth in the Premier League.

Apparently they are ‘among a new wave of coaches signalling the revival of home-grown managers. Some 11 of the 20 Premier League clubs are now led by someone from UK shores’.