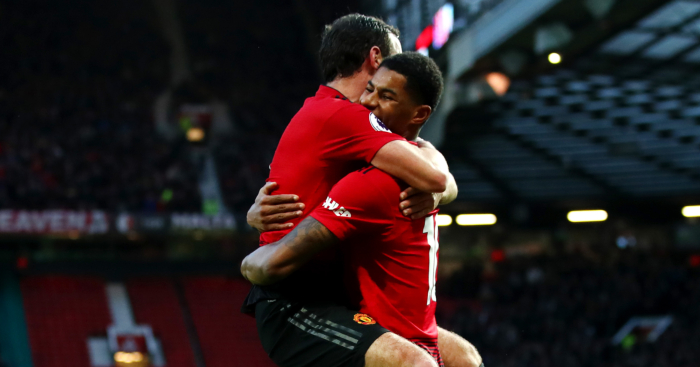 For those who think Team of the Week goes for the left-field choice at every opportunity, you’ll be happy to see that most of the names this week are familiar. More importantly, why do Brits use a baseball expression like ‘left field’? Shouldn’t it be ‘deep extra cover’ or something? It’s a basic 4-3-3:

Goalkeeper: Alex McCarthy (Southampton)
The slimmest of pickings at this position, with keepers standing largely idle or making mistakes under pressure. Even McCarthy wasn’t flawless, flapping at a Cardiff corner. Some good stuff in the first half, though. He parried a hard Josh Murphy shot, smothered at the same player’s feet, came off his line with a strong punch, and for the pièce de resistance, denied Nathaniel Mendez-Laing with a prodigious leap.

Right-back: Cesar Azpilicueta (Chelsea)
Nearly forgotten about him, hadn’t you? Under Antonio Conte’s 3-4-3 counter-attacking system, he saw lots of action as an outside centre-half. Under Sarri’s possession system with three central midfielders, he’s more peripheral. But he’s still a wonder when in form. A mere 13 tackles and five interceptions. Can you imagine any other full-back doing as well against Leroy Sané, Raheem Sterling, and David Silva? Even so, he still has to get in on the ‘one big mistake’ rule, because Sané once dropped him on his seat, and could have scored had he trusted his right foot. But overall a magnificent show.

It was a bumper week at this position. Pablo Zabaleta was fantastic in both attack and defence for West Ham, and only loses out because he’s made the list this season already. I’ve said this before, but what strikes you time and again is how he knows exactly when to go forward and when to sit back. Just behind was Diogo Dalot, who let us know he has considerable crossing skills. A couple of bobbles on defence, but otherwise decent against admittedly weak opposition. Bruno Ecuele Manga had another fine defensive match, this time against Southampton. Aaron Wan-Bissaka did his level best against Felipe Anderson (see below), but the Brazilian was eventually too much for him.

Centre-half: David Luiz (Chelsea)
A nearly impeccable performance against the toughest attacking side of all, and the goal puts him over the top. He’s never been thought of as a big-game player, but was excellent against Liverpool and just as good here. Maybe even better, because he was more controlled, and didn’t need to be so spectacular. Let’s also remember he started the move for the opener with a perfect long diagonal ball. Lots of people love him – now maybe we can start to admire him as well.

Centre-half: Sol Bamba (Cardiff City)
Second time in a few weeks, with 82 minutes of a most un-Bamba-like performance: steady, simple, precise. It couldn’t last, of course – in the 83rd minute he wandered out of position for no discernible reason, recovering at the last second to shut off Nathan Redmond. Let’s do his statline: three tackles, three interceptions, six clearances, two blocks. He’s three days older than Zabaleta – nice to top off your career by doing well in the top flight. His teammate Sean Morrison was equally worthy, but since scoring a goal is a centre-half tiebreaker, missing two good chances, as Morrison did, should be a tiebreaker the other way.

Elsewhere, for those who thought Wes Morgan was done: he’s not. The last couple of weeks, with Harry Maguire unavailable, he’s played his best football of the season. Against Spurs he stood strong against everyone who tried to run by him, and added some important clearances. Could he have done better against Son Heung-min on the second goal? On the other side of the pitch, Toby Alderweireld wasn’t tested as much, but easily snuffed out the danger when necessary. Mamadou Sakho had a strong match for Crystal Palace, and was unlucky when his only poor clearance was drilled into the net by Robert Snodgrass. Zanka was the pick of the Huddersfield defenders as they nearly held Arsenal.

Left-back: Lucas Digne (Everton)
Snatched the spot with nearly the last kick of the weekend. His best attacking match of the season, with plenty of dangerous crosses and nifty combinations on the wing. Was very effective in defence against Watford until around the hour mark, when a poor clearance led to the Hornets’ first goal and he was caught flatfooted on the second. In other weeks that might have been enough to disqualify him, but his only competitor was Ashley Young, who faded after a brilliant start. A rather remarkable solo goal and incisive attacking play promised much, but then he drifted for a while, and in the second half seemed to lose focus altogether. I went with Digne because the opposition was stronger, and because the late free-kick decided the match.

Defensive midfielder: N’Golo Kanté (Chelsea)
I’ve never thought of him as my favourite player, because it’d be like having a favourite omnipotent deity. But I’d rather watch him than any other footballer in the universe. His defence is so very good that you sometimes forget he’s equally good as a distributor. Much has been said about his new role, but it’s telling that his two best performances of the year have been against Liverpool and Manchester City, where his deep midfielder skills were most needed. He was imperious in the second half, getting to everything within range and sending the necessary passes forward. Plus the goal, of course – if he can get a few more of those he might yet thrive further up the pitch.

Attacking midfielder: Juan Mata (Manchester United)
Wouldn’t it be loverly if loverly Juan Mata got to play Fulham every week? When given space, he makes it look so effortless. Not a dominant match, but super sweet at the business end. A goal and an assist, and would have had a second ‘A’ by his name if Ander Herrera hadn’t muffed the chance. Also his typical useful movement and passing. I don’t think he’ll get the start at Anfield, sadly, but with a little bit of luck he’ll get some minutes.

Attacking midfielder: Roberto Pereyra (Watford)
Lively from start to finish, and more effective in the press than usual. Climaxed a fine evening by playing a crucial role in both Watford goals. Note that he’s here as an attacking midfielder, not a winger. Perhaps trying to shake up a slumping side, Javi Gracia fielded an asymmetrical formation, with Ken Sema as an actual right winger and Pereyra more central. Isaac Success, one of the two strikers, played a bit more to the left to compensate. Pereyra can certainly play as a number 10, so the tactics will bear close watching in the weeks to come.

Dele Alli deserves a mention. It wasn’t his best game, and he looked a tiny bit off the pace at times. Still, although thwarted twice by Wes Morgan and once by Kasper Schmeichel, he finally struck home even if the tiniest bit offside. I love the way he looked at the assistant referee to see if the goal counted. Also some nice passing combinations with Son Heung-min.

A couple of words about James Maddison: England international. He’s an absolute natural at No.10, and while Spurs didn’t give him much chance until fairly late, he did a marvelous job as playmaker in the last half hour.

Winger: Felipe Anderson (West Ham United)
Wherever you live on this great footballing planet, do yourself a favor: find a stream and watch West Ham every week. You’ll wonder why Felipe Anderson isn’t starting every match for Brazil and picking up Ballon d’Or votes on the way. Maybe it’s because his final season at Lazio was marred by injury and a serious bust-up with his manager? It’s worth noting that he eventually apologised to the entire dressing room – I mention that because his attitude at West Ham has been exemplary. Watch him get up and down the line with vigor, or celebrate his team’s goals with genuine joy. And his play is out of this world. Against Crystal Palace he fought a brilliant running duel with Wan-Bissaka, eventually wearing the youngster down with sheer quality. Made some gorgeous crossfield passes, and his goal was of the highest order. An absolute top-class footballer. Keep him happy, healthy, and free-to-air.

Winger: Marcus Rashford (Manchester United)
Not everything he did came off, but he drove the attack for much of the first half and only let up a little in the second. A little lucky on the goal – Sergio Rico should have done better – but it was a nice reward for his persistent play. Other defences won’t be as obliging, though. When he first broke in, he was Mr. Absolute Cool in difficult situations. That’s not who he is right now, but the talent’s still there. If José Mourinho isn’t the right manager, I hope he finds one, and at Manchester United too.

Elsewhere, Nathaniel Mendez-Laing, not to be confused with Morgan Gibbs-White or Annegret Kramp-Karrenbauer, had an excellent hour on the right of Cardiff’s attack. A constant threat going forward, he was robbed of a goal by Alex McCarthy (see above) and almost got an assist when he teed up Harry Arter. Was bidding to be a regular until a knee injury in August, and now should compete for the spot again. Diogo Jota had seemingly lost his starting spot at Wolves, but the goal against Newcastle, plus the shot which led to the late winner, should put him back in contention.

Striker: Mo Salah (Liverpool)
Wingers are moving to central striker these days – think Richarlison and Marko Arnautovic – and there’s no reason why Salah can’t become the best of the lot. He’s got the skills, the workrate, and perhaps most importantly, the movement. The only drawback to the position change is that he’ll usually need more service if he’s alone up front. Against an over-extended Bournemouth it hardly mattered, though.

I’ll bet Opta listed the third goal as a big chance, but I’ll also bet 50% of strikers would have failed to finish it. It won’t win the Goal of the Season Award, but seven touches in the penalty area? That’s class.