Jose Mourinho has even started to "confuse" his Man United players with changes and tactics. 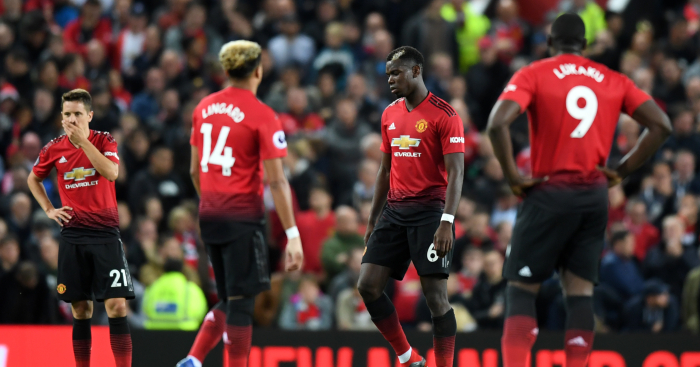 Jose Mourinho could be sacked by Manchester United if they suffer a ‘negative result’ against Burnley on Sunday, with players ‘confused’ by the manager’s tactics against Tottenham.

United were beaten 3-0 by Tottenham on Monday in Mourinho’s heaviest ever home defeat. Read 16 Conclusions and cheer/weep. Then look at the five things he really needs to sort out soon.

Mourinho made six changes for the fixture, including deploying midfielder Ander Herrera as one of three centre-halves.

According to Neil Custis of The Sun, the alterations made players feel ‘uncomfortable’, and has generated ‘tension’ in the dressing room.

‘While United’s dressing room used to be a happy, vibrant place, it has now gone quiet,’ Custis adds. ‘Players are reluctant to express opinions to their under-pressure boss about their plight.’

It is also stated that Anthony Martial and Eric Bailly were ‘particularly upset’ after being omitted from the matchday squad altogether.

Mourinho, the drunk uncle at a wedding, retains the backing of the United boardroom, but his post-match press conference walkout did lead to ‘bemusement’ from the higher-ups.

United face Burnley on Sunday in a game that the Daily Mail believe could decide his immediate future.

Chris Wheeler states that ‘players and staff’ feel the club will part ways with the Portuguese if they lose to the winless Clarets, who face Olympiakos in the Europa League three days prior.

Mourinho ‘has not lost the dressing room,’ but ‘morale has suffered in recent months’. Losing to Burnley would be the final straw.