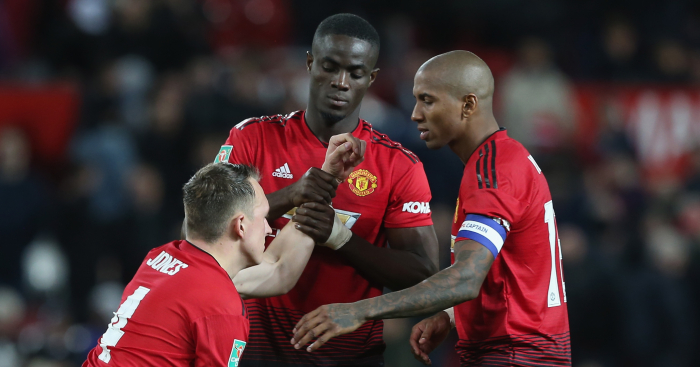 United exited the competition on penalties after a 2-2 draw with the Championship side at Old Trafford.

Mourinho’s relationship with Paul Pogba overshadowed the game, the manager having removed the midfielder as “the second captain” earlier in the day.

The Portuguese held a squad meeting where Pogba was stripped of the vice-captaincy, which left some players ‘angry and frustrated’.

But it was Mourinho’s statement that he “knew that we were going to be in trouble with Jones, with Bailly” taking penalties that has elicited an even greater reaction from the squad.

According to The Sun, the manager’s ‘humiliation’ of the two centre-halves ‘has stunned’ their teammates.

Mike McGrath adds that while the situation with Mourinho and Pogba, which came to a head when cameras captured an argument between them during training, has affected the players, this has had a similar effect.

‘The public ridiculing of the pair has had as much of a negative impact on the squad as Mourinho telling Paul Pogba he will never captain United again and their subsequent training-ground bust-up in front of TV cameras.

‘United team-mates now fear defensive duo Jones and Bailly are being targeted just like Luke Shaw was last season when the England left-back was humiliated by Mourinho.

‘His criticism has also confirmed where the pair are in the Portuguese’s pecking order, with Jones starting only one Premier League game so far this season, the 3-0 Old Trafford thumping by Spurs.’