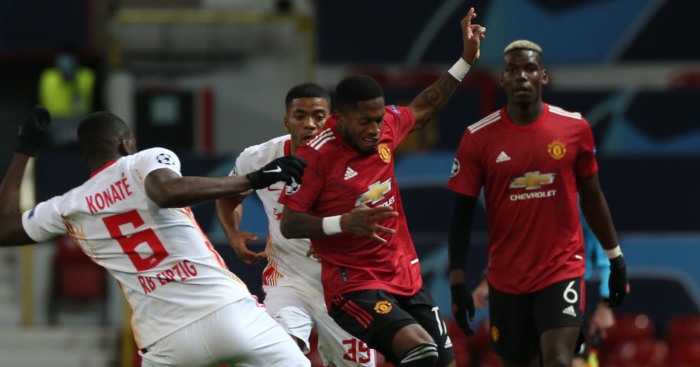 In January, The Sun‘s Chief Sports Writer Dave Kidd wrote about Mauricio Pochettino as Manchester United’s manager-in-waiting. There was no nuance to his column, with this possibly the most damning line about United’s actual manager:

‘It is only a matter of time now because nobody with any footballing knowledge believes the Norwegian has either the tactical expertise or the strength of personality to cure United’s long-term malaise.’

Now we can all change our minds, but only at a tabloid newspaper can such views be entirely reversed in the space of just a few months without even a glance back.

Kidd writes after United’s admittedly impressive win over RB Leipzig, that wins over PSG and Leipzig ‘can now be the springboard for a successful campaign. United are 15th in the Premier League, yet have a game in hand and the title race is wide open’.

Yes, less than a month after Manchester United lost 6-1 to Tottenham – described by Kidd’s colleague Neil Custis as ‘the worst performance since Sir Alex Ferguson retired seven long years ago’ – United could now win the title. The actual title.

The bookies don’t think so, making them 20/1 shots at best for the title after United won just two of their opening five games of the Premier League season, but Kidd clearly now believes that Solskjaer has magically developed either the tactical expertise or the strength of personality (or both?) to cure United’s long-term malaise.

2020 really has been the oddest of years.

Back to that Neil Custis report from the Tottenham game just a few weeks ago: ‘Only the theme music from Benny Hill would have done a montage of their defending justice.’

He also wrote that ‘three of United’s back four combined to produce the most comical piece of defending you are likely to see’, describing Harry Maguire as ‘getting worse with every appearance’. He wrote that they were ‘rudderless, leaderless’ and at one point referred to the ‘circus’ being in ‘full swing’.

And now? ‘MAYBE this defence of Manchester United’s is not that bad after all.’ Well, only three teams have conceded more goals in the Premier League this season, but carry on…

Apparently, ‘the 6-1 defeat to Spurs was unforgiveable but there were reasons for United’s shaky start. They only had a 34 day break between the end of last season and beginning of this and a week’s training together.’

Odd that none of those ‘reasons’ were mentioned in the ‘circus’ review, Neil.

A man of honour

Oh wow. This from Head of National Sports Network Desk Thomas Bristow on the Mirror website is a headline worthy of that kind of billing.

And there we were thinking that Anthony Martial took the penalty against RB Leipzig because he was the designated penalty-taker.

Silly us. It turns out that Rashford – by not going against his manager’s instructions – was ‘honouring’ a man who also did not take a penalty because he was also not the designated penalty-taker.

Fred blogs
Fred was excellent against RB Leipzig but we cannot quite agree with this from the Express website – ‘Man Utd boss Solskjaer has found transfer solution by unearthing gem in surprise new role’ – which was clearly designed to get ‘Man Utd’ and ‘transfer’ in the same headline at a time when Man Utd are not actually doing any transfers.

So many issues just with the headline. Can you ‘unearth a gem’ that cost £52m? And is it really so surprising to see a £52m central midfielder impress in central midfield? Right-back would have been a ‘surprise new role’. Goalkeeper even more so. But central midfield? Ahead of a defensive midfielder? Seems like Fred might be playing exactly where you might expect Fred to play.

‘Manchester United were in need of a new defensive midfielder but Ole Gunnar Solskjaer may have just found the answer.’

Well Solskjaer started Nemanja Matic and then brought on Scott McTominay to play defensive midfield while Fred started on one side of a diamond, so it seems unlikely that the ‘answer’ is the man who made no tackles but created two chances.

‘Fred was everywhere. Tackling, pressing, intercepting, passing. Everything you would want from a Manchester United midfielder in a big European game.’

Well, not tackling actually, but carry on. He sounds like an excellent box-to-box midfielder.

‘Under Solskjaer, United have often lacked control from deep and now Fred is providing exactly that.’

Hmmm. Either he is ‘everywhere’ or providing ‘control from deep’. You can’t really do both, especially when you have actual defensive midfielders like Matic and McTominay.

‘When he first arrived at Old Trafford under Jose Mourinho, the 27-year-old was a box-to-box midfielder who loved arriving in the final third and scoring goals.’

‘Now Solskjaer looks like he may have reinvented him in a defensive mould, which allows the other attacking players to do the damage.’

‘Nobody ever predicted that he would be one of the first names on the United team sheet but that statement is now probably doing him a disservice. He is arguably the first name.’

But still, well done on that ‘transfer’ headline, fellas.

In March he said that ‘United are two midfielders short, assuming they beckon the agitating Pogba towards the door, and need a specialist defensive midfielder’, while he awarded Matic 2/10 and Pogba 1/10 for their performances in the mauling by Tottenham earlier this month.

‘Matic, the most impressive at Goodison Park over seven months ago, was only withdrawn due to a caution and Van de Beek, in his first major start for his new club, made way for Bruno Fernandes, who found Rashford for the clincher. United’s midfield department has not been this imposing since they last hoisted the European Cup in 2008.’

Wow. It’s little wonder they are about to win the Premier League title.

Sid Lowe on Barcelona and Bartomeu