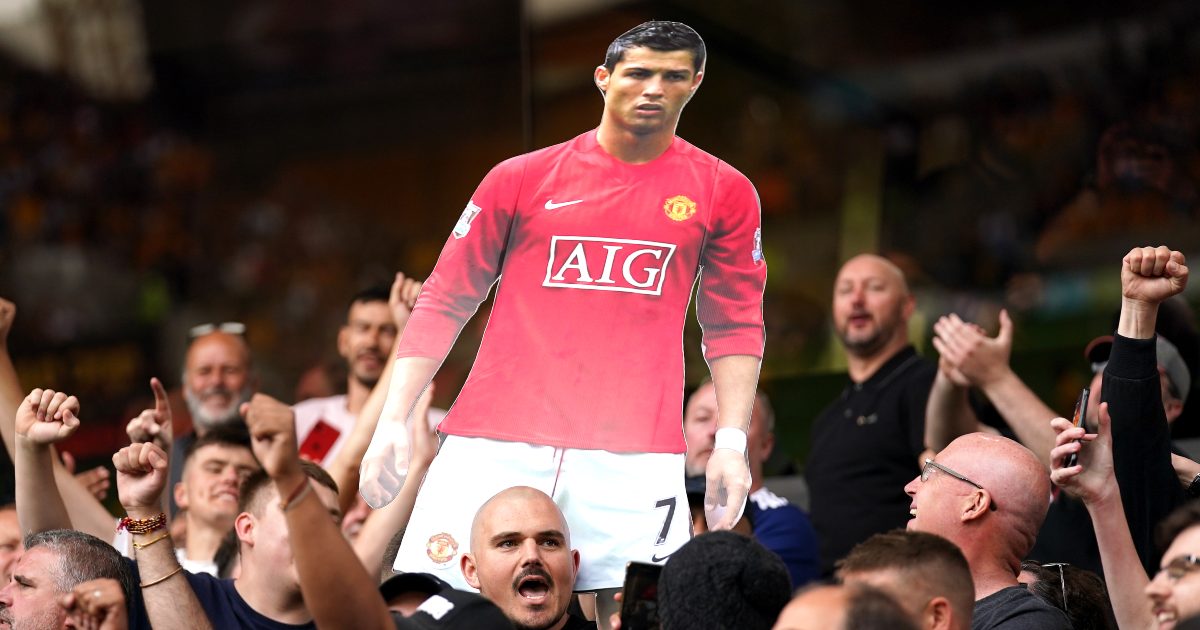 It’s hard to believe Cristiano Ronaldo is actually real, isn’t it? He belongs in a comic book superhero movie, not living his life down in the boondocks with us mere mortals. It’s easier to see him as a concept, a philosophy or a mathematical equation, rather than an actual human being. If his head split open to reveal sparking wires and flashing lights, it wouldn’t be surprising. Yet, as breath-taking as he is as a footballer, he is hard to empathise with as a human being, because he doesn’t seem human. Everything seems built on pre-programmed or learned responses, calculated and imagined from a third person perspective for lighting and image projection.

But the prospect of him taking his oversized neck back onto the Old Trafford pitch again is a great football story and will be compelling viewing, at least until we get sick of the endless media fawning, over-focus and old clips. And more than anything else it will create a lot of content for the Manchester United media machine to pump out.

It is tempting to think that is by far the most important thing about the transfer, over and above anything that may happen on the pitch. When you’re such a big money-generating machine as Manchester United with a voracious appetite, content is king, queen and jack and what better content than clipping up Ronaldo doing, well, anything? Millions of people already seem to lap up anything and everything he does like it’s old-time religion.

So is it a business decision, more than a football decision? It must be because this late signing threw all other pre-season plans into disarray and obviously they did not need a striker, they needed a defensive midfielder. Suddenly, they’ve got to accommodate a superstar who isn’t going to run very much, but is going to stare at himself on a big screen quite a bit. I’d be surprised if he doesn’t want to view his own VAR decisions in super-slow-mo to see if he looks good as he falls to the floor.

The danger is that his presence is just living in the past, or rolling in nostalgia; an encore from the era when United were all-conquering. He doesn’t fit into any kind of planning or strategy at the club, but he’s a phenomenal marketing opportunity which will bring in lots of cash.

However, he might also be a 36-year-old block to progress for younger players such as Mason Greenwood. If they sell a million shirts with his name on, their cut of the overpriced sportswear will pay for his wages, but what will the longer-term effect be on club development? Does it matter? Or does only the money matter? I think we know the answer to that one.

Some say he’s a great influence on younger players. But is he relatable enough to empathise with or be inspired by? He’s hardly an obscure figure. If CR7 presses your buttons, he’ll already have done so. So whatever that influence might or might not be, it’s already baked in. No-one is saying this but humans being humans, some at United absolutely will resent his presence.

If numbers can be pornographic, his stats are hardcore and it seems at least likely he’ll add a few more to his various totals across the next couple of years. Since stats are a form of entertainment in and of themselves, this should keep many people happy, especially Cristiano, but whether his brilliance will improve the functioning of Manchester United as a team has to at least be in doubt.

They may beat sides by a couple of extra Ronaldo goals but the signing of Raphaël Varane seems potentially more significant, as his assist for Greenwood’s goal against Wolves may indicate. But the lack of a top-class defensive midfielder will not be eased by Ronaldo’s arrival. It may only highlight the problem further.

Some say although he’s 36, he’s more like a 26-year-old, but this is fantasy. He can’t run like he did 10 years ago. In the summer for Portugal, he did one lung-busting sprint from his own area to score. It was fantastic to see, but he hasn’t got a dozen of those per game in his legs anymore. He can’t do it and thus wasn’t asked to do it at Juve. Do United want an auld fella just standing around up front waiting to get the goals and glory? It seems they do. But how will it play with everyone else?

In the pointless Messi v CR7 debate I always sided with the robot Portuguese because he was always more of a physical force, scored all sorts of different goals and scored more goals too. And who doesn’t love his physics-defying, prodigious leaping, where he goes up, hangs in the air, lights a fag, takes a look around, has a draw, puts the fag out and then nods the ball into the net?

United were hardly short of goals last season with 73, a total second only to Manchester City, so he will only make a significant contribution toward returning United to the top of the tree if he scores difference-making goals, in other words, important goals that would not be scored if he wasn’t there. Just scoring one that Edison Cavani would’ve scored anyway adds nothing.

Scoring a penalty in the Europa League when others can’t, might do. Breaking tight games with a free-kick – an art form that James Ward-Prowse aside seems to have fallen out of fashion – is another potential asset. But does he score free-kicks very often now? The last thing the club needs is someone trying to relive their glory days, endlessly thrashing the ball into the wall in an attempt to score one more brilliant goal.

Scoring a lot will not offer too much of a challenge, but although Cristiano is brilliant, and could be fantastic to watch, when it comes to making a difference to winning titles, that brilliance must make a unique contribution which shifts the United behemoth up a couple gears. You wouldn’t bet against him being able to do it, of course. But the fact remains United did not need another goalscorer and no number of social media hits will change that.