Home Mediawatch Man United set to sign Sancho, Havertz and Thiago! Get in! 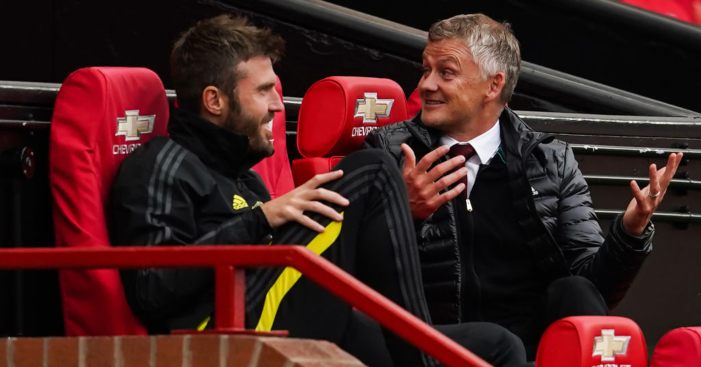 Man United will sign them all after beating Bournemouth. Basically, it’s all brilliant…

The net is closing in…
If ever there was an illustration of the gulf between newspaper and online football journalism, it comes in The Sun on Monday morning.

There’s a back-page headline about Mason Greenwood being ready for England (was Ole Gunnar Solskjaer ever going to say no, my player is not ready for England?), a column from Alan Shearer saying how the brilliant Greenwood reminds him of himself and a match report from Old Trafford that is gushing in its praise of this new Manchester United side, which beat Bournemouth on Saturday by pretty much the same scoreline as Newcastle in midweek.

It begins, by the way, with ‘WHAT must Jadon Sancho and Jack Grealish be thinking as they watched Manchester United over the last week?’ Well, they are probably thinking that they would rather like to play for this Manchester United because they are looking pretty bloody promising, but anyway…the message is that this United side is just grand.

‘His manager seems to have settled on a first-choice starting line-up which has proved highly successful. For the first time since 2006, United have gone with the same XI for three Premier League matches in a row.

‘Three wins with 11 goals conceded pretty much tells its own story, even if there will be bigger tests ahead than Sheffield United, Brighton and Bournemouth.’

Cynics might argue that the team has gone unchanged because there is a lack of strength in depth (see the grind v Norwich in the FA Cup) but let’s not be cynical; this is a pretty good United side and The Sun are happy to peddle that narrative.

Perpetuation
There is little doubt that the Mirror and Simon Mullock dropped a bollock as they seemingly believed a parody website and ran a story on Friday evening about Bruno Fernandes and Paul Pogba being hurt in a training ground-clash. Apparently, the quote of “that’s me f**ked” from Ole Gunnar Solskjaer raised no red flags at all.

But at least they deleted the story as soon as they realised that they had dropped said bollock, regardless of the fact that it was presumably attracting excellent traffic.

We cannot say the same about several other outlets, who are still running these stories almost 48 hours after Pogba and Fernandes actually played against Bournemouth…

‘Paul Pogba and Bruno Fernandes ‘are BOTH injured in a training ground collision… and both Manchester United midfielders could now miss out on their clash with Bournemouth – with Portuguese star coming off worse’ – MailOnline.

‘How Man Utd could line-up against Bournemouth with Pogba and Fernandes DOUBTS after training clash’ – The Sun.

An absolute shit-load of shamelessness there.

As LIVE
Sticking with Manchester United, The Sun website stretch the meaning of ‘LIVE’ as they bring us this headline:

And when did this LIVE news about Jadon Sancho agreeing a Manchester United deal emerge? Friday obviously. LIVE, my arse.

Still, they are absolutely not the only ones, with the Manchester Evening News bringing us this Monday morning news update:

‘Monday morning headlines’ from a speculative Friday podcast to encourage the notion that the Sancho deal is moving forward? Check. The only thing missing is the word ‘LIVE’.

Closer than close
But this one from Jack Otway at the Express takes us in a whole new direction: Down.

And why are they ‘closer than ever’? Has there been a development, as suggested by a slug that includes the words ‘Manchester-United-transfer-news’?

Nope. It seems that Manchester United are ‘closer than ever’ to a Jadon Sancho transfer after the Bournemouth win because, well, the more games they win, the more attractive they are to potential players. Obviously. Expect the very same headline after their next victory. Seriously, do.

‘United have never been closer to where they used to be in the time since Ferguson walked away.’

Well, they’re fifth. So strictly speaking they have been closer. When they were second, third and fourth.

‘They had their moments under the likes of Louis van Gaal and Jose Mourinho but, good though they could be under the pair, they were never consistent.

‘But that’s changed. United have changed. And Sancho now has more reasons to move to Old Trafford than any point previously.’

And that, ladies and gentlemen, is Manchester United transfer news.

Have it
The Manchester Evening News on Kai Havertz:

‘With the German heavyweights out of the frame for now the pathway has seemingly opened for United to have a free pursuit of Havertz if they so wish.’

Thiago-a-go-go
But never mind Sancho or Havertz, what about Thiago? Well, look at this tweet from Bild‘s Christian Falk:

Liverpool is a big topic. There are also rumors about @ManUtd

‘Thiago could reportedly join Manchester United, despite strong whispers that the midfielder is heading to Liverpool. The Bayern Munich star will leave the Allianz Arena this summer after failing to agree a new contract.’

The headline they chose – ‘Man Utd could hijack £31m Thiago transfer from under noses of Liverpool in fresh twist’ – is absolutely key to what comes next.

On Sunday on the Liverpool Echo: ‘Manchester United ‘could hijack’ Thiago move and other Liverpool transfer rumours rated’

On Monday on the Manchester Evening News: ‘United to ‘hijack’ Thiago bids’

Are they blithely quoting a headline from the Express that attempted to turn an 11-word tweet into a story? Oh yes.

Should it still surprise us? Probably not.

According to Duncan bloody Castles.