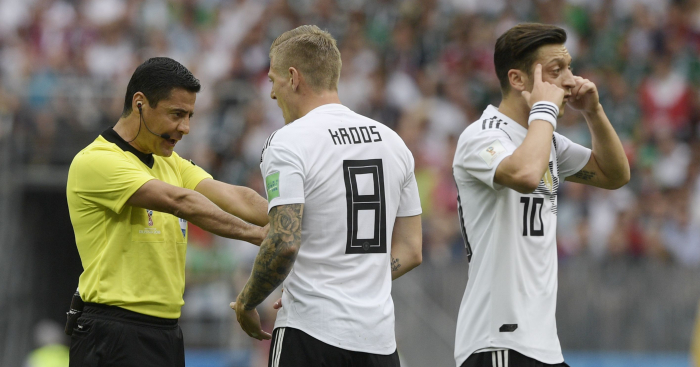 Barkley up the wrong tree
Here is The Sun‘s Neil Ashton getting giddy about ‘pretty much the complete international performance’ from a player who ‘ran the show’ in Montenegro.

‘France have got Paul Pogba. Germany have Toni Kroos. Spain have Thiago Alcantara.

They did. And while excellent on Monday against Montenegro, he’s understandably nowhere near as good as three of the best current central midfielders in the world.

Oh and Barkley’s ‘wild, floundering’ club manager presumably had nothing to do with rescuing his international career and helping him ’emerge as another option in this England midfield’.

After all, wasn’t it Ronald Koeman’s fault when a ‘confused’ Barkley was playing poorly?

Ratio, someone still loves you
Here is the Daily Mirror‘s John Cross getting giddy about an England ‘revolution’ that ‘shows no signs of stopping’.

‘This is a stadium where England have struggled in the past, but last night they gave another demonstration of how far they have come.’

…and was as good as Paul Pogba, Toni Kroos and Thiago Alcantara, remember.

He was indeed very good.

‘while Harry Kane’s strike put his goals to games ratio into the world-class bracket.’

Because 21 goals in 36 England games was just plain average. That literal 0.1 boost to his goals to game ratio has finally convinced us.

Kroos control
Aside from being the German Ross Barkley, Toni Kroos’ other part-time occupation is being perennially linked with Manchester United. Even with David Moyes a distant Old Trafford memory, he is the subject of speculation.

The Daily Mirror website is responsible for the latest rumour, as their headline suggests United are closing in on their long-term target.

That sounds pretty concrete, either from one of the three parties involved or from a well-placed Spanish, German or English source. Let’s dig a little deeper.

‘Manchester United look set to finally secure a deal for Toni Kroos after the odds on the Real Madrid midfielder heading to Old Trafford shortened dramatically.’

‘Kroos was on the verge of joining United in 2013 only for the deal to fall through. The Germany international then opted to joined Real 12 months later.

‘But if the odds being offered by Ladbrokes on the transfer are anything to go by then the 29-year-old could soon be playing in the Premier League.’

But none of this explains where the ‘edge closer’ bit in the headline comes from, the part that gives the story any gravitas whatsoever.

We get a quote from a Ladbrokes spokesperson – “It looks as though Kroos may finally jump ships with a mega-money move to Manchester potentially on the cards” – that sounds much less certain. But nothing else.

So, to clarify, you have:

Please, sir, Collymore
‘I’ve no idea why some people are still bleating on about the timing of Tottenham’s stadium move,’ begins Stan Collymore, always speaking his mind for the Daily Mirror.

‘About the integrity of the Premier League competition being compromised or this, that and the other,’ he continues, with ‘this, that and the other’ being quite legitimate complaints about allowing a club to move stadiums mid-season, thereby giving a potential advantage or disadvantage to opposition teams who do or do not play there.

But Stan has that base covered.

‘Yes, Harry Kane might up his performance by 10 per cent in every game Spurs play there for the rest of the season.

‘And the same might for for several of his team-mates, too.

‘But if you tell me that visiting players won’t be buzzing to perform at the new ground as well then I’ll tell you you’re talking a load of old cobblers.’

That’s all well and good, but here’s one counter point: Will ‘visiting players’ really be more ‘buzzing to perform’ at Tottenham’s new stadium than at the literal Wembley?

Real gone Kidd
Stan is not the only man pontificating about Tottenham’s new stadium. Here’s Dave Kidd in The Sun:

‘How much of it is about the presence of your own supporters, or the familiarity of the surroundings, or just the self-fulfilling mindset of both teams?

‘But it seems Levy has risked that advantage to halt the continuing embarrassment of the delay, rather than to benefit his team.’

Considering ‘that advantage’ has seen Tottenham’s Premier League home form dip from 53 points at White Hart Lane in 2016/17 to 43 points at Wembley in 2017/18 and 28 points with five games remaining this season, what is Levy ‘risking’ again?

‘There is also said to be some trepidation among Spurs players about moving in, and surrendering a certain degree of home advantage, at such a key point in their season.’

That ‘certain degree of home advantage’ has helped make Tottenham one of only two teams to earn a higher percentage of their Premier League points away this season. They will be fine.

You can ring my bell
But enough of that. Let’s go back to Stan Collymore as he auditions for the part of old man shouting at cloud.

‘I’m not having the rings Paul Pogba has had made for his France team-mates to celebrate their World Cup win in Russia last summer.’

He will be devastated.

‘I’ve always seen the rings presented to Super Bowl winners as gaudy, horrible things – the very worst of the celebrations of what American sport is.

This just in: commemorating being crowned the best in the world at your sport is A Bad Thing.

‘There’s nothing wrong with a good old-fashioned medal. But a ring? That’s an absolutely honking idea.’

Jealousy is a disease, Stan. Get well soon.

Recommended reading of the day
David Squires is excellent.

Miguel Delaney on how to punish racial abuse.