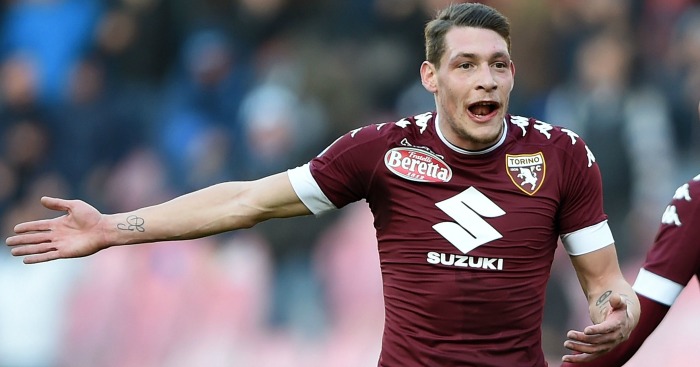 Manchester United, Arsenal and Chelsea transfer target Andrea Belotti says that he is paying no attention to the speculation surrounding his future.

Belotti has emerged as one of the finest talents in Europe this season, the striker having scored 25 goals and assisted a further six in 30 Serie A appearances for Torino.

Premier League trio United, Arsenal and Chelsea have all been linked with a move for the Italian, but there is little doubt as to what it will take to prise Belotti from Turin.

The 23-year-old’s release clause has been confirmed as standing at around £85million, and Torino have made it clear that he will not be sold for any less than that valuation.

But Belotti has insisted he is not allowing speculation to dwell on his mind.

“The clause honestly has no effect on me,” he told Tiki Taka.

“The transfer market gives inflated figures, the price of a player has risen a lot.”

He also discussed his playing idol, naming AC Milan legend Andriy Shevchenko as the player he looks up to most.

“Sheva [Andriy Shevchenko] is my absolute idol,” he said.

“He was a champion on and off the pitch, an exemplary professional who impressed me with the ease with which he scored from every position.