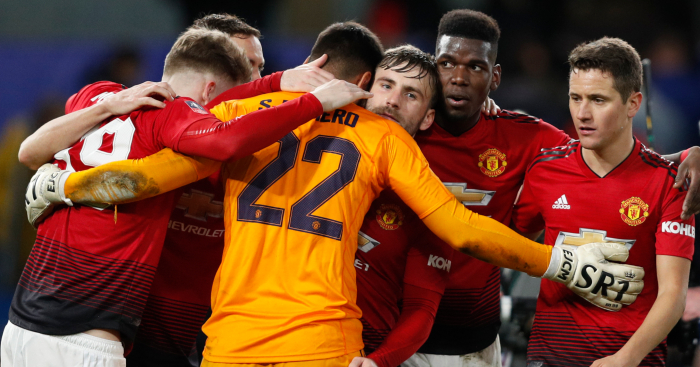 Cardiff City v Watford
Back-to-back wins have pulled Cardiff clear of the relegation zone but Watford are also on a roll (losing just one of their last seven games). The Hornets have been impressive on their travels this season and look quite the bet.

As an aside, I have been wondering all week if when you get a parcel delivered and the guy or gal asks you to sign their phone thing, whether they will still be all “right, thanks, that’s brilliant” if instead of your signature you actually drew a cartoon set of c*ck and balls? Food for thought perhaps as we wait for the Brexit fog to clear?

West Ham v Fulham
The Hammers have been superb at times on their own patch this season – beating Manchester United and Arsenal – and should roll right over Fulham at the London Stadium. The Cottagers have conceded 12 goals in their last five away games and could struggle to contain the likes of Marko Arnautovic and Felipe Anderson.

Burnley v Tottenham
Spurs, and Fernando Llorente in particular, have stepped up while Harry Kane has been injured. But the Londoners are set to welcome back their 20-goal striker this weekend and it would be so ‘Kanesy’ if he weighed in straight away with a goal.

Bournemouth v Wolves
How good have Wolves looked in recent weeks? They genuinely look like a club who could perhaps gate-crash the top six next season the way things are going and they should be too hot for an erratic Cherries side on the south coast. We’ve obviously got ’nuff love for Eddie Howe, but basically feel Nuno Espirito Santo is just as magnificent with his mountainous, runaway beard.

Newcastle United v Huddersfield Town
The last time the Toon played at St James’ Park their fans nearly screamed the place down after that terrific 2-1 win over champions Manchester City. And they can put clear daylight between themselves and the rest of the relegation riff raff by beating a Terriers side who have lost 13 of their last 14 matches in all competitions. If Huddersfield were a band, right now they would be Hootie & the Blowfish. And trust me, no f**ker wants to be Hootie & the Blowfish.

Leicester City v Crystal Palace
My mam went away on Wednesday and I was immediately intrigued as to why she started texting as opposed to using WhatsApp. She explained she had turned off data roaming as “I don’t want to get charged £2 a day for data roaming”. That’s fair enough, you might think. Save for the fact she was only in York.

Palace are unbeaten in their last five games in all competitions while City have taken just one point from the last 15 available. Hmmmm.

Betting: Crystal Palace to win and both teams to score at 6/1 (bet365)

Arsenal v Southampton
The Saints were shock 3-2 winners the last time these two teams met and are as big as 6/1 to follow that up with another win in north London. Indeed it finished 3-2 at Arsenal when the two sides last played at the Emirates back in April. Unai Emery’s men should win this as they tend to beat the lesser teams at HQ. However they look increasingly dodgy at the back and I can’t see them finishing the season in the top four.

Manchester United v Liverpool
The bookies, who deal only in facts, supposedly rarely get it wrong. However they did very recently by pricing the Red Devils up at nearly 3/1 to win at Stamford Bridge and they might be about to make a fiscal faux pas once again by chalking United up at better than 2/1 here. So much has changed since these two teams met at Anfield and Liverpool cruised to a 3-1 win in December. Jose has been given the old heave-ho and United have not looked back since. In contrast Liverpool have looked a little tense in recent weeks and they are clearly not the defensive force they were earlier in the season. With Marcus Rashford in the form of his life because he has a manager that now believes in him, United – unbeaten in their last four at home in the league against Liverpool – look must-bet material again here.

Chelsea v Manchester City
Chelsea were absolutely embarrassed less than two weeks ago as they were smashed for six without reply by Pep’s strollers. And with this in mind the bookies have them down as big favourites to win the Carabao Cup for the fourth time in six seasons. Sergio Aguero is on fire and Leroy Sane will be buzzing after that howitzer of a free-kick in the week against Schalke. All eyes will be on Maurizio Sarri at Wembley with the Italian now staring down the barrel. Despite a decent enough start to the season it’s all gone horribly wrong. Has he lost the dressing room? We don’t know. But an unwillingness to rotate despite a busy fixture list and a refusal to compromise his tactics is doing him no favours. All things being equal, we reckon City will win this with a bit to spare.