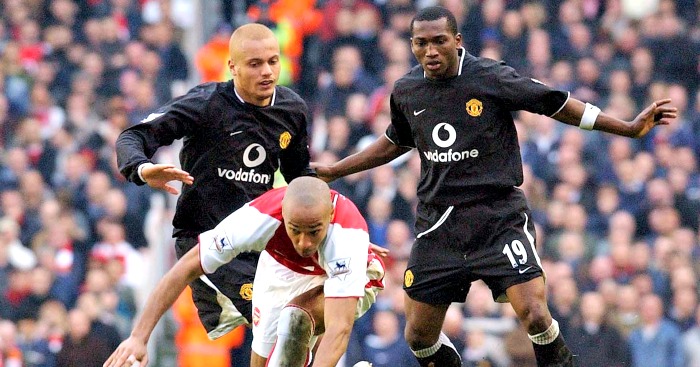 The premise is simple enough, even for you: To be eligible for this XI a player must have featured in a Premier League match between these two sides since 2000.

GOALKEEPER: Mark Bosnich
In terms of competition, this position was perhaps the most hotly-contested. Both sides offered up plenty of options, with Arsenal offering up Stuart Taylor, and Manchester United’s corner being fought by Tomasz Kusz Kuz Kuszcs… that Polish bloke. Rami Shaaban was considered for inclusion, but he has suffered enough in the wake of being named in the north London derby dregs XI.

So who does the No 1 shirt go to? Why, it goes to the man Sir Alex Ferguson described as a “terrible professional”. Mark Bosnich spent just one full season in the Manchester United first team and, to be fair, claimed a Premier League winner’s medal for his efforts in 2000. But the fact that he shared the role of starting goalkeeper with Raimond van der Gouw and Massimo Taibi is damning.

RIGHT-BACK: Guillermo Varela
A defence of Guillermo Varela, Marcos Rojo, Michael Carrick and Daley Blind. A forward line of Jesse Lingard, Marcus Rashford and Memphis Depay. A bench of Sergio Romero, Paddy McNair, Timothy Fosu-Mensah, Andreas Pereira, Adnan Januzaj, Joe Riley and James Weir. All that, and Louis van Gaal managed to secure a 3-2 victory over Arsenal in February of this year, even sparing the time to out-celebrity Mike Dean by tumbling over on the touchline.

It was only Varela’s second Premier League start, his first coming in a 2-1 defeat to Bournemouth the previous December. He will always be remembered as David Moyes’ first signing.

CENTRE-BACK: Igor Stepanovs
There haven’t been too many comprehensive victories in fixtures between these two sides. There is obviously United’s 8-2 victory in August 2011, which was bloody hilarious. There was the 3-0 win which did a rampant Arsenal side a disservice in October of last year. But one utter tonking is often forgotten.

It was in February 2001 when United beat the Gunners 6-1 at Old Trafford. Dwight Yorke scored a hat-trick, the hosts scored five times within 38 minutes, and the eventual champions handed a veritable tarting to the eventual runners-up. With a defence comprised of Oleg Luzhny, Igor Stepanovs, Gilles Grimandi and a young Ashley Cole, it is little wonder Arsene Wenger’s men were beaten so thoroughly.

CENTRE-BACK: Tyler Blackett
Arsenal have beaten United just once in their last ten Premier League meetings. Poor Arsene Wenger. In that timeframe, Sir Alex Ferguson has beaten him thrice and drawn with him once, David Moyes earned a win and a draw, and Louis van Gaal inflicted upon the Frenchman two rather ignominous defeats. The most recent has been documented, with a debuting Marcus Rashford embarrassing the supposed title contenders. But Van Gaal boasts a win at the Emirates Stadium, too. A Kieran Gibbs own goal and a strike from Wayne Rooney inspired a United side containing Tyler Blackett and Paddy McNair as starters in defence to all three points in November 2014.

LEFT-BACK: Armand Traore
I could put Andre Santos here, but Andre Santos is a hero. I mean, he followed up a dire first-half performance in a meeting between these two sides in November 2012 by swapping shirts with a players his fans absolutely despised. At half-time. At half-time! Genius.

No, we need someone else for this role. Armand Traore, perhaps? He made 13 Premier League appearances for Arsenal, the last of which came in that 8-2 drubbing in August 2011. He started, he played the full 90 minutes, he was criticised post-match for laughing and sharing jokes with United players. Andre Santos, eat your heart out. He was sold to QPR two days later.

“I know people think all those Arsenal players were rubbish that day but, personally, I wasn’t there in my head,” the Frenchman said in December of that year. “I was all set to join QPR on the Thursday and then Arsenal said I had to play this game first. The fact is I wasn’t fit.” Sure.

RIGHT-WINGER: Luke Chadwick
Sir Alex Ferguson clearly did not feel he had got his message across. The Scot was not content with thrashing Arsenal 6-1 in 2001 that he had to take more drastic measures. He had to compound the punishment, accentuate the embarrassment. So he looked to his bench, pointed at Luke Chadwick and told him to get himself ready. The winger was afforded 15 minutes of that victory, one of his 16 appearances in the title-winning 2000/01 season. He has more Premier League winner’s medals than you or I. Or Steven Gerrard.

Djemba-Djemba made his debut in English football against Arsenal, committing a foul on Sol Campbell which was so bad it was described as “obscene” by Arsene Wenger, who actually did see it. But that was in the Community Shield. Instead, we must travel to March 2004, where he helped carry fellow central midfielders Paul Scholes and Roy Keane to a 1-1 draw. Louis Saha scored a late equaliser. So yeah.

CENTRAL MIDFIELDER: Nico Yennaris
Sorry to fire shots in the direction of Brentford Football Club, where Nico Yennaris has found a safe haven as a steady defensive midfielder in the Championship, but he qualifies for this list on merit. The 23-year-old made just one Premier League appearance in his 13 years at Arsenal, coming on as a substitute at half-time of United’s 2-1 win in January 2012.

LEFT-WINGER: Stefan Malz
A man who now exists solely in the realm of features on Arsene Wenger’s five worst signings or an XI of terrible Wenger buys, Stefan Malz spent just two years at Arsenal after being purchased from 1860 Munich in 1999. Of the German’s six Premier League appearances, one came in a 1-1 draw with Manchester United in January 2000. Arsenal were leading 1-0 when they brought Malz on in the 70th minute; Teddy Sheringham equalised three minutes later. Somehow, it seems right.

STRIKER: Julio Baptista
Julio Baptista scored three goals in 24 Premier League games for Arsenal. He scored four goals in a single League Cup game against Liverpool in 2007. He also scored two goals against Tottenham in that same year in that same competition. But in terms of his league form, he did not look like a signing from Real Madrid. He does boast an unbeaten record in games against United however, facing them twice in the 2006/07 season and emerging on the winning side in both instances. He played 22 minutes in Arsenal’s 1-0 win in September 2006 – their last at Old Trafford – and 12 minutes in a 2-1 win in the return fixture the following January.

STRIKER: Park Chu-young
Julio Baptista wore the No 9 shirt at Arsenal. He was just one victim to the curse which has befallen that shirt. The long list includes Davor Suker, Francis Jeffers, Jose Reyes, Eduardo, Lukas Podolski and, of course Park Chu Young. He was signed from Monaco in 2011, and made just one Premier League appearance before being released three years later. He was a second-half substitute in a 2-1 defeat to United in January 2012.