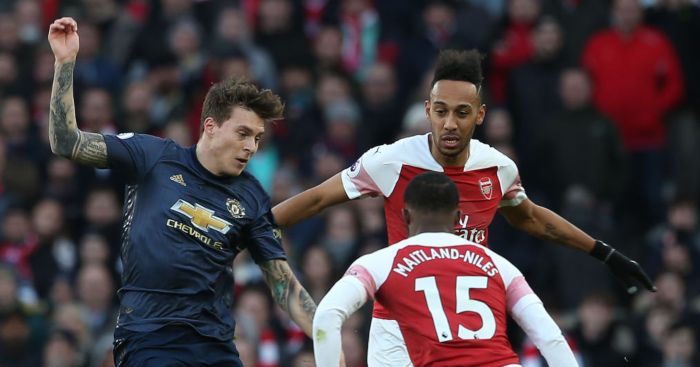 The days of Sir Alex Ferguson and Arsene Wenger locking horns are a distant memory. Monday’s game could be the lowest quality Manchester United v Arsenal fixture in the history of the Premier League.

Arsenal’s late win against Aston Villa last weekend only papered over the cracks, and their poor away form suggests it will be another weary slog for Unai Emery’s players at Old Trafford. Manchester United are no better, of course, meandering aimlessly through matches this year.

Then again, Arsenal are boosted by the return to fitness of Kieran Tierney and Hector Bellerin, two players who could transform Emery’s tactics.

1) Will Arsenal’s meek defending play into the hands of Martial and James?
Probably the most infuriating thing about Arsenal’s away form over the last few years is their lack of courage; time after time they stand off the opposition, backtracking nervously rather than confronting the man in possession. This wouldn’t be quite so much of a problem if it coincided with a deliberate tactical strategy, but Arsenal don’t actually sit deep or hold a compressed shape, rather they float around in a midblock that fails to limits space in most areas of the pitch.

That gives huge encouragement to Man Utd, who are only really dangerous when afforded time to run directly at the opposition defence. Solskjaer’s emphasis on speed down the wings – an attempt to conjure the spirit of United in the ’90s – is problematic in a sport considerably more tactically complex than it was 20 years ago, yet Arsenal may let them get away with it.

Daniel James has got United out of trouble several times already this season by dribbling directly at backpedalling defences and cutting inside to shoot, while prior to his injury Anthony Martial looked sharp making runs off the shoulder of the last defender. The hosts can run straight through Arsenal’s error-prone defence.

2) Will Pogba and Mata combine in the space left by Xhaka?
If that doesn’t work, then United’s second best route to goal is via Paul Pogba and Juan Mata combining in central attacking midfield. Pogba returned to the starting line-up against Rochdale in midweek and was relatively lively – although he may be too tired to perform on Monday.

Arsenal’s midfield is being held together by Matteo Guendouzi at the moment, and irrespective of whether Emery plays a 4-3-1-2 or 4-2-3-1 (more on that below) there will be space around Granit Xhaka for Pogba to work his magic. The Switzerland international does not have the positional wherewithal to play in a team without much midfield compression, which is why both John McGinn and Jack Grealish had so many touches of the ball in the No. 10 space last weekend.

Juan Mata will flit across the central column of the pitch looking to exchange quick one-twos with Pogba, so if the Frenchman is on form Arsenal’s midfield could cave – in turn creating yet more space for James and Martial as an exposed back four lunge into tackles.

3) Should Emery go for a diamond 4-3-1-2 or a 4-2-3-1?
There is no way of guessing which formation Emery will choose for this one. His 4-2-3-1, used against Villa last weekend, is too light in central midfield, while the diamond 4-3-1-2 is too narrow; Watford practically walked down the flanks the week before, amassing 31 shots.

If it’s a 4-3-1-2 then the midfield diamond should ensure Pogba’s influence is limited, and will most likely create a counter-attacking tactical strategy for the visitors. Pierre-Emerick Aubameyang and Nicolas Pepe will operate close together, meaning extra strain on a Victor Lindelof-Harry Maguire partnership that has hardly looked secure over the first six weeks of the campaign. However, James will have a field day down the left should Hector Bellerin be without a supporting winger. Gerard Deulofeu had a remarkable 93 touches of the ball in the 2-2 draw at Watford.

The 4-2-3-1 brings its own set of problems. Arsenal rarely manage to control midfield without a third body in the centre, plus Alexandre Lacazette’s injury means they are relying on either Bukayo Saka or Reiss Nelson to fill in on the left. Neither player has impressed creatively in the league so far.

4) Will Tierney and Bellerin/Chambers reinvigorate Arsenal’s attack?
Games that are low on quality often come down to the head-to-heads between the two sets of full-backs, and indeed that could be the case here. A potentially stodgy midfield battle will leave space on the flanks for Tierney and Bellerin or Calum Chambers. Aaron Wan-Bissaka will anticipate winning his individual battle on Tierney’s Premier League debut, but Bellerin’s pace or Chambers’ improved physicality should cause Ashley Young problems.

One of the main reasons Arsenal lack fluency is that neither Sead Kolasinac nor Ainsley Maitland-Niles are good enough going forward to offer width, leaving the Gunners attempting to work through congested central areas of the pitch. Bellerin/Chambers and Tierney will overlap aggressively, providing an out-ball that could give the visitor the edge. After all, with two ambling sets of midfielders on the pitch, the territorial battle at Old Trafford will probably be defined by how the full-backs react to one another.

5) Can Ceballos step up to help Aubameyang hurt United’s centre-backs?
Arsenal’s goals against Watford came out of nothing – the result of Aubameyang’s world-class finishing – while Villa simply collapsed in on themselves at the Emirates, conceding via an unforced defensive error and two unnecessary set-piece fouls. Creating chances is a big issue on the road.

The best hope is perhaps Dani Ceballos, who will look to link with Aubameyang as Arsenal counter-attack down the left (42% of their attacks are down this side). This is where both players naturally drift, and indeed where United are least stocked thanks to the hesitancy of an often disappearing Andreas Pereira.

Ahead of West Ham’s opener last weekend Mark Noble had nine touches of the ball, unchallenged, before picking out a pass that ended in Andriy Yarmolenko’s goal. Give that much time to Ceballos and he will find one of Aubameyang’s darting runs.