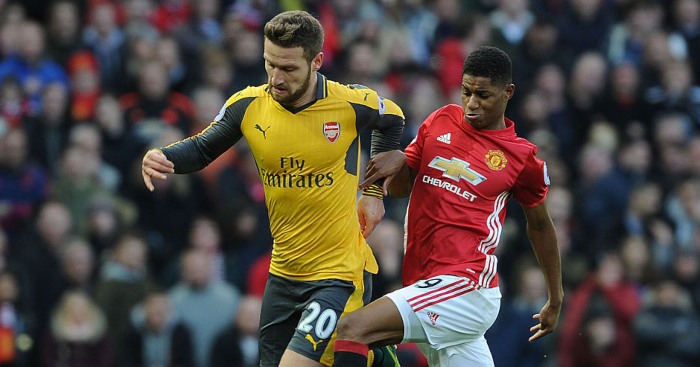 Man United v Arsenal is the undoubted highlight of a Big Weekend. We take a look at the tactics…

There are numerous reasons to believe this one will be low on goalmouth action. For starters, Premier League managers are beginning to wrest control after a chaotic start to the campaign, leading to a drop from 3.5 to 1.9 goals per game last weekend in a pattern led by Manchester United and Arsenal, who drew 0-0 with Chelsea and lost 1-0 to Leicester City respectively.

But there is a solid tactical explanation for why Saturday’s game is likely to be a dull stalemate, too. Arsenal’s inability to create chances is becoming a serious problem for Mikel Arteta, whose 3-4-3 looks overly functional in the absence of a genuine playmaker. His two central midfielders are too often disconnected from the front three, while using a three-man defence can also leave Arsenal light on attacking numbers out wide.

Ole Gunnar Solskjaer, meanwhile, will be happy to sit back and play on the counter-attack, as he so often does in ‘Big Six’ matches. What’s more, Arteta is very good at creating a highly disciplined shape that prevents matches from becoming disordered or end-to-end.

Xhaka currently leads Arsenal in progressive passes and passes into the final third this season https://t.co/sf9wafwYyE

2) Or will Arsenal’s possession allow Man Utd to counter-attack?

Then again, there is always the possibility that Arsenal’s propensity for low-tempo possession football lures them into the United trap, and the contradictory tactical set-ups of the respective managers sets us up for a crucial victory for Solskjaer’s side.

Arsenal tend to pass out slowly from the back in the hope of tempting the opposition press, but that won’t work at Old Trafford. United are happy to sit right off ‘Big Six’ teams, retreating into their own half before counter-attacking quickly in behind. Consequently Arsenal’s defenders will be able to carry the ball up to the halfway line unchallenged, leading to an expansive shape and cautious probing for space between the United lines.

If the game falls into a pattern of Arsenal possession and United retreat, the hosts could spring counter-attacks that cut through a makeshift and error-prone Gunners defence – just as Leicester eventually did via Cengiz Under and Jamie Vardy at the Emirates.

Man Utd deployed a diamond 4-4-2 in the 5-0 victory over RB Leipzig, and it could be just the system to hit Arsenal on the break. Mason Greenwood and Anthony Martial – then later Marcus Rashford – made excellent tandem runs on the shoulder of the last defender, alternating between the wing and centre-forward, with Bruno Fernandes feeding balls through from central attacking midfield and Paul Pogba greatly improved on the left of the diamond.

Martial’s suspension means Mason Greenwood will start up front with Rashford, and it was the latter two who most excelled in the system; Greenwood scored a brilliant opener in midweek, the sort of goal it is easy to envisage Arsenal conceding this weekend (especially with Shkodran Mustafi to the right: more on that later).

If United deploy a narrow diamond they will outnumber Arsenal through the middle, making Thomas Partey the visitors’ most important player. Partey will generally be the man tasked with shutting down Fernandes – although the reverse is also true.

Partey is exactly what Arsenal need to add bite in central midfield and quick, line-splitting passing under pressure. Considering United will be sitting back on Saturday, Partey’s ability to cut through the midfield could make all the difference. Fernandes will lead the press against him.

After a reckless tackle by partey on fernandes

4) Do injury concerns make Arsenal vulnerable on their right?

The goals will likely come down United’s left flank, where 44% of their attacks take place (the joint-second highest rate in the Premier League) thanks to the movement of Rashford, Martial or Greenwood, and Luke Shaw on the break.

Shaw ranks fourth in the Premier League for progressive runs, with 4.92 per 90, highlighting his value in dribbling forward on the ball. He is generally given so much room to do this because the opposition is distracted by the movement of Rashford and Martial, but Shaw’s runs in turn ultimately create extra space for others on the left.

It is undoubtedly the most fertile area of the pitch for the hosts, and it happens to coincide with Arsenal’s weakest area. David Luiz’s injury means Shokdran Mustafi is likely to start at right centre-back, a problem possibly compounded by the amount of possession Arteta’s side will hold. As they search for ways to break the lines, Hector Bellerin may get caught too high up the pitch when the ball is turned over – exposing Mustafi to Rashford and Greenwood.

Unfortunately we have to play a back 3 against United with Mustafi starting. Him against Rashford on counters is something that we should be trying to avoid all match long.

5) Can Aubameyang capitalise on AWB being overworked?

The left flank is also Arsenal’s most productive area, with 44% of their attacks filtered down this side, and if the visitors are to score it will most likely be via the intelligent movement of Pierre-Emerick Aubameyang and Kieran Tierney. These two work well together, the former making diagonal runs infield and the latter using his pace to overlap.

Aaron Wan-Bissaka is an excellent defender but he is often left with too much to do. His right winger, whether Daniel James or Juan Mata, will rarely track back after a United counter-attack breaks down, exposing Wan-Bissaka to Arsenal’s best attackers. Ordinarily, the United right-back is expected to hold up the play long enough for a central midfielder to get across to help, but Aubameyang isn’t the sort to get stuck out wide.