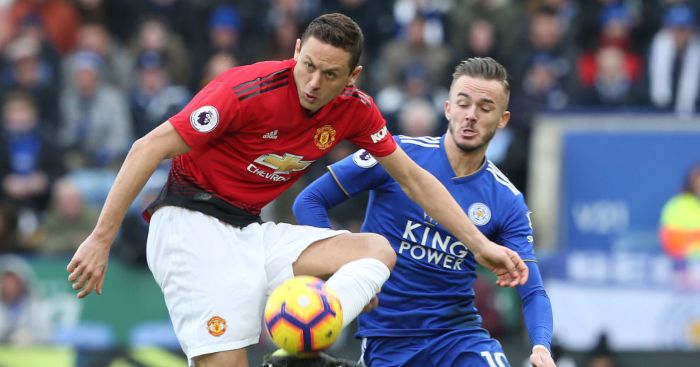 Do any neutrals expect Manchester United to win this match? They’ve won just 12 points from their last 13 league games under Ole Gunnar Solskjaer while Leicester have collected 28 points from 15 under Brendan Rodgers, but more importantly at least five injuries to first-team players has left the hosts alarmingly depleted.

Leicester have every right to view themselves as equals to Man Utd, then, and yet to devise a tactical strategy with such an attitude could prove their undoing.

1) Should Leicester approach as equals or copy Crystal Palace’s tactics?
Injuries to Aaron Wan-Bissaka, Paul Pogba, Luke Shaw, Anthony Martial and Jesse Lingard close the debate: Leicester’s strongest 11 on Saturday will be as good as, if not better than Man Utd’s. The hosts’ reliance on inexperienced players all over the pitch, plus their dreadful run of form, means a rampant Leicester could go hell for leather at Old Trafford for a statement result in the Champions League race.

But that would be a mistake. The one weapon at United’s disposal this season is pace, and so to commit men forward or attempt to dominate possession plays right into Solskjaer’s hands: should Ben Chilwell and Ricardo Pereira overlap, Daniel James and Marcus Rashford can counter-attack successfully.

Instead, Leicester ought to retreat, drawing United forward before breaking behind them. Not only does a deep defensive line nullify the home side’s speed in the final third (as proven by Crystal Palace three weeks ago) but it also brings a dodgy centre-back partnership higher up the pitch…

2) Can Maddison run the game against Matic and release Vardy in behind?
Jamie Vardy will know exactly how to move on former team-mate Harry Maguire’s blind side, and exactly how he and Ayoze Perez can create defensive mix-ups like the one that led to Jordan Ayew’s opener in the last game at Old Trafford. Under Rodgers, Leicester’s direct and vertical counter-attacks have become an important feature, and as an anxious United search for the lead the Foxes can expect joy from the Vardy-Maddison partnership.

Leicester tend to play in a 4-3-3 formation against the Big Six with James Maddison shunted out to the left, but he will still cut inside, playing in the half-spaces and on the half-turn. His direct opponent will probably be Nemanja Matic, a somewhat flat-footed player clearly in his twilight years. We can expect Maddison to cleverly ghost in behind Matic, ready to receive the ball from Youri Tielemans or Hamza Choudhury and quickly release Vardy.

Man Utd sit high but they don’t counter-press, which means a fairly disorganised transition from attack into defence. Leicester’s ability to get Vardy in behind in just a couple of passes means the hosts will fall on Saturday unless Matic and Scott McTominay put in 10/10 performances.

3) Or will Rodgers fail to exploit United’s weaknesses by playing too narrowly?
The only problem with Rodgers’ 4-3-3 is that it is perhaps too narrow to really get at United for the full 90 minutes. Perez and Maddison will both drift infield to support Vardy, leaving Chilwell and Pereira to provide the width – something they’ll only manage if Leicester sustain an attack and thus move high up the pitch. The Maddison-Vardy combination is suited to the 4-3-3, but it does mean they will lack pace on the flanks, where Palace, Wolves, and Southampton all found joy.

Wilfried Zaha and Patrick van Aanholt persistently threatened Wan-Bissaka, Wolves’ wing-backs were the constant outlet in the second half at Molineux, and as soon as Southampton switched from a narrow 4-2-2-2 to a wide system (on the hour mark) they scored.

This weekend Ashley Young and Alex Tuanzebe (or Marcus Rojo) will be the overworked and under-supported full-backs should Harvey Barnes or Demarai Gray sprint at them. But it doesn’t look likely. By narrowing the pitch, Leicester may make this into a more even territorial battle, which can only help a United side lacking defensive quality in the wide areas.

4) How do a depleted Man Utd create chances without Pogba?
In attack, United are just as badly hit by injuries. Martial’s absence means Marcus Rashford will lead the line, leaving either Mason Greenwood or Andreas Pereira to occupy the right flank as James continues on the left. More worrying still, Pogba is unavailable, heaping pressure on Juan Mata to step up his game.

Choudhury and Wilfried Ndidi are both excellent tacklers and interceptors who will severely limit space in the final third for United. Mata’s movement across the width of the pitch, then, will be crucial, because linking with James and Young on the left will be United’s main route to goal. The Spaniard must be at his sharpest, passing quickly to evade the Leicester midfield, not least because McTominay, Pereira, and Matic will only slow the game down when in possession.

5) Can Rashford get in the middle of Evans and Soyuncu?
Jonny Evans and Caglar Soyuncu haven’t looked particularly well connected as a centre-back partnership so far, with Sheffield United and Bournemouth both scoring goals by sneaking into large spaces between them. Chelsea repeatedly caught them too far apart in the first half at Stamford Bridge, too, but failed to capitalise.

Soyuncu looks like a talented and confident defender on the ball, although so far he has not been assured in his own penalty box. He and Evans would both benefit from a match in which Leicester are sat deeper – closing the gap between them and simplifying their roles – but, again, there is no guarantee Rodgers won’t look to out-play the hosts on Saturday.

Here is a slight chink in the armour for United to target, and without Martial’s movement their best route is via crosses from wide. Young’s deliveries in particular can lead to miscommunication between Evans and Soyuncu; winning headers between two centre-backs is an under-rated skill of Rashford’s