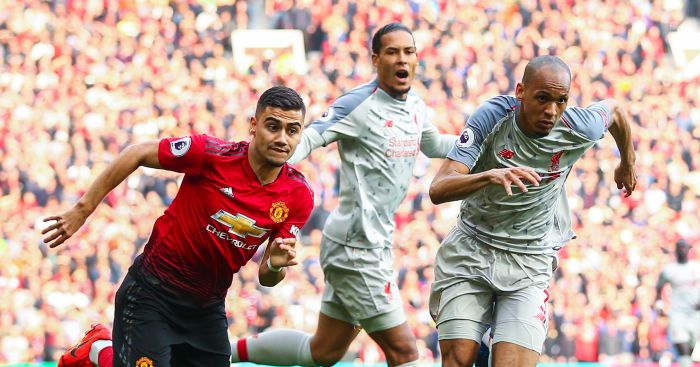 It is tempting to predict Liverpool will thrash Manchester United on Sunday, their furious high-energy football exactly the kind of approach that should blow away sluggish and aimless opponents. But instead, this will probably be yet another dull north west derby, United’s strong defence and Liverpool’s increasingly congealing attack providing us with a low-scoring match with very few moments in which either side becomes stretched. Sorry.

Man Utd’s injury problems worsened during the international break when David de Gea was ruled out of action, while Paul Pogba and Victor Lindelof have failed to recover in time and Anthony Martial is only fit for a place on the bench. This match won’t be a triumphant revival for United, then, nor will it be the humiliation some are predicting.

1) Does Liverpool’s approach suit counter-attacking Man Utd?
Solskjaer told Sky Sports this week that his team have “struggled more in games where we’ve had to break teams down,” and so Liverpool’s attacking mentality will create an “open game” that “will suit us”. Certainly Man Utd struggle to create chances when opponents sit back (more on that later), but Liverpool’s advanced positioning doesn’t automatically mean United will get forward in numbers.

Marcus Rashford and Daniel James will look to make runs in behind Liverpool’s high back line, of course, yet United don’t have the tempo or tactical impetus in central midfield to find those runs and make this an “open game”. Instead, United’s low block and mean back four (xG suggests they have the league’s best defence) will limit the visitors while Liverpool’s own shape will largely pen United back. A tedious stalemate is probable.

Liverpool were fortunate to beat Leicester City and Sheffield United in their last two games, both matches highlighting a creeping sense of creative stagnation for the league leaders. They still lack a creative, line-breaking central midfielder in the Philippe Coutinho mould. Teams are beginning to find that deploying a narrow defensive shell can squeeze out the spaces for Mohamed Salah and Sadio Mane, with disciplined closing down of the Liverpool full-backs stunting Klopp’s attacking threat.

Solskjaer’s solid back four is well-suited to Liverpool’s mentality, then, but nothing we have seen of United this season suggests they can counter-attack consistently at Old Trafford.

2) Static United midfield means high-tempo Firmino can blow away the cobwebs
However, Liverpool’s recent inability to play with fluency in the Premier League is testament to the tactical organisation and midfield diligence of the opposition; Man Utd are unlikely to match the positional work-rate of Sheffield United, for example. In fact, Solskjaer’s central midfield is static and easily bypassed, handing Liverpool an opportunity to blow their hosts away – providing they begin with enough tempo.

The two teams’ respective energy levels could be the defining feature, because if Liverpool race out of the blocks then Roberto Firmino will regularly drop off the front line and get on the ball in the No. 10 space. He can dart into pockets either side of Fred (or Nemanja Matic), playing those killer one-twos with Mane or Salah that so often provide Liverpool with shooting opportunities.

Solskjaer’s best chance of shutting Firmino down is to pack the midfield, but in United’s previous home games against Big Six opposition this season – Chelsea and Arsenal – Solskjaer has gone for a 4-2-3-1. Fred, Matic, and Scott McTominay together could be enough to limit Firmino. Playing at Old Trafford, Solskjaer might deem such a setup too negative.

3) Will Wan-Bissaka and Mane’s battle leave Robertson free?
Liverpool’s second-biggest threat is on their left flank, where Andy Robertson may find himself unmarked, free to make overlapping runs or to cross unchallenged from deep. This is partly because United’s right winger, Andreas Pereira, lacks the defensive qualities needed to successfully cover that flank. He is the reason why Allan Saint-Maximin and Jetro Willems were so dominant on the left for Newcastle, which forms part of an alarming wider pattern. Nicolas Pepe stood out for Arsenal, Aaron Cresswell and Felipe Anderson stood out for West Ham, Patrick van Aanholt stood out for Crystal Palace…

Robertson will outfox and outrun Pereira, finding space because Aaron Wan-Bissaka will be preoccupied by Mane. The Senegalese forward tucks inside to free up space for Robertson, and there is no chance Wan-Bissaka will leave Mane to the centre-backs. The England right-back generally stays close to his right-sided centre-back regardless of the opposition. On Sunday, Alex Tuanzebe will desperately need the help.

4) How can Man Utd create chances without Pogba?
Man Utd’s creativity issues are worthy of deeper analysis, because the speed in the Liverpool back line and the energy in their midfield means United cannot rely on simply sprinting past the visitors on the counter-attack. Without Pogba sewing together the lines of midfield and attack, Solskjaer’s side don’t seem to have any idea how to build into the final third.

This is predominantly a confidence issue, with the vast majority of United’s players repeatedly going for the conservative pass rather than attempting to cut a ball between the lines or turn; constant sideways passing allows the opposition to reset. However, it is also the consequence of a lack of tactical coaching.

Juan Mata tends to drift out wide rather than hold a No. 10 position and await bodies to join him, leading to individualistic performances in which attacks are funnelled down the flanks for James to simply run at defenders. There is no clear plan and rarely are three or four players occupying the same zone, making high-tempo passing impossible.

5) Is James versus Alexander-Arnold a key battle that favours Man Utd?
As ever, then, United’s hope rest on the young shoulders of James. If there is a weak link in the Liverpool team then it is Trent Alexander-Arnold, whose commitment to attack can leave him frantically chasing back when Fabinho is breached and the opposition counter-attack is on. It’s hard to see United making this a regular occurrence, but when they do James will undoubtedly be the target of their breaks.

He has the pace to take advantage of a ten-yard head start on Alexander-Arnold, potentially concerning Joel Matip – especially if Rashford leans to the left to support James in these counter-attacks. However, it is more likely that United’s attempted counters will be cut out by Jordan Henderson, given special instructions on that side of the pitch to close off the passing lane out to James.