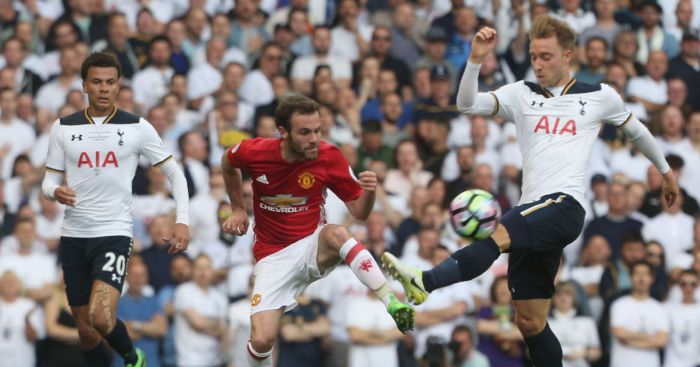 Jose Mourinho’s return to Old Trafford promises to be entertaining, no matter the quality of the match itself. His mere presence guarantees drama, while the tactical style of Tottenham Hotspur’s performance could be era-defining. Mourinho has suggested he will not change how Spurs play. This is his first real chance to prove it.

Meanwhile Ole Gunnar Solskjaer limps on, the shadow of Mauricio Pochettino looming large despite the board’s assertion that the club are moving in the right direction. A heavy defeat here would end Man Utd’s hopes of a top-four challenge and highlight what a manager bounce can do. This could be it for Solskjaer.

Here are five tactical questions ahead of Wednesday’s game:

1) Will Mourinho seize the opportunity to cast aside his ‘park the bus’ tag?
Mourinho is a pragmatic tactician rather than a strictly negative one, and so he is likely to continue with Tottenham’s attacking 3-2-5 formation at Old Trafford as opposed to sitting deep and absorbing pressure as he would in ‘Big Six’ matches when sat in the other dugout. Man Utd are only dangerous under Solskjaer when they’re shown too much respect – such as by Liverpool in the 1-1 draw back in October – but when confronted high up the pitch their mid-table quality is exposed.

That attacking United from the off would help Mourinho rebrand himself is a welcome bonus, but it is secondary to the simple fact Spurs are superior in almost every department, and therefore should so at Old Trafford. Using a front five – with Serge Aurier up alongside Harry Kane, Dele Alli, Lucas Moura and Heung-min Son – should overwhelm United’s full-backs in particular, while quick, direct attacking lines (characterised by Toby Alderweireld’s returning long balls last weekend) can capitalise on the hesitancy that comes from low confidence.

By contrast, to sit off United and use a classic Mourinho defensive shape would invigorate the crowd and allow Solskjaer’s ailing side to grow into the game, creating the sort of lifeless contest that would not go down well with the away fans. Spurs should go for the kill.

2) Will Dele dominate in the spaces around United’s two-man midfield?
The most important battleground on Wednesday evening is in the huge spaces that develop around Fred and Andreas Pereira, United’s only two fit central midfielders. Aston Villa repeatedly drove through the heart of Solskjaer’s midfield despite aiming to play almost exclusively down the wings; just think of the damage a rejuvenated Alli can do in a team swarming the number ten space of late.

With Lucas sitting in the right half-space and Kane dropping off the front, Dele is revelling in a free role that sees him alternate from ghosting between the lines and making runs ahead of the Spurs striker. Having such close support has helped Dele rediscover his quick one-touch passing in the final third, but more importantly it is Mourinho’s insistence on sharp forward passes that is seeing Dele get on the ball in better positions.

Fred has never quite settled into the Premier League, only performing well in low energy games and Pereira isn’t really a central midfielder at all; they stand little chance of keeping track of Dele.

3) Can Rashford and Martial counter behind Aurier?
The biggest flaw in Mourinho’s 3-2-5 is the potential for fast breaks down their right, where Aurier is largely absent and Davinson Sanchez struggles to get across. In theory, each member of the 3-2 defensive shape stays back to provide Spurs with a solid blockade against the opposition counter, but in all three of their games under Mourinho teams have found room.

Ryan Fraser was released down the left repeatedly in the 3-2 victory over Bournemouth; Olympiacos’s Daniel Podence created the second goal in their Champions League clash by countering behind Aurier; Michail Antonio turned the game against West Ham with runs down both channels.

The bursts of combination play between Marcus Rashford and Anthony Martial on United’s left have been one of the very few positives from their season so far, so here is one area in which the hosts may be stronger. Daniel James is, of course, a direct threat on the other flank too, although Danny Rose should have the pace to prevent the 21-year-old from creating chances.

4) Can Mata lift his performance against a flat-footed Spurs midfield?
The second reason for Tottenham’s concession of six goals in three matches under Mourinho is the double pivot in midfield looking a little flat; Tottenham aren’t pressing high or dropping back with much conviction, giving the two midfielders too much to do in the transitions. Dier in particular has been caught on the back foot recently, although it was Winks who was repeatedly dribbled past in those clumsy first 20 minutes against Olympiacos.

Man Utd don’t necessarily have the players to make anything of this, unless Juan Mata improves on his performance against Villa. The Spaniard could drop into the spaces between Dier and his partner, but rarely have we seen Mata play with the energy or intelligence that characterised his game back in his days at Chelsea. This would be a good time to rediscover his old form.

5) Will Mourinho’s conservative team selection prevent Spurs from taking control?
Spurs struggled to exert control over Bournemouth for the first 20 minutes at the weekend, only gaining fluency after their first goal forced the visitors to open up. That was mainly because Moussa Sissoko played in the role Lucas had occupied in the two previous matches while Tanguy Ndombele got the nod ahead of Christian Eriksen or Harry Winks in midfield.

Spurs lacked technical players who could dictate the tempo, leading to risk-averse passing and some clumsy touches in the middle. Mourinho’s defensive instincts probably mean he will pick the same line-up at United, potentially elongating the pitch as Spurs sloppily gift possession to Solskjaer’s counter-attacking players.

Should the match become end-to-end Spurs should still be the more clinical, but it would make more sense for Mourinho to start Eriksen so that Tottenham can bully their hosts and stop the counterattacks from happening in the first place (hence subbing Dier for Eriksen versus Olympiacos). It might seem counter-intuitive, but fewer defensive players in the starting 11 would improve Tottenham’s defence.