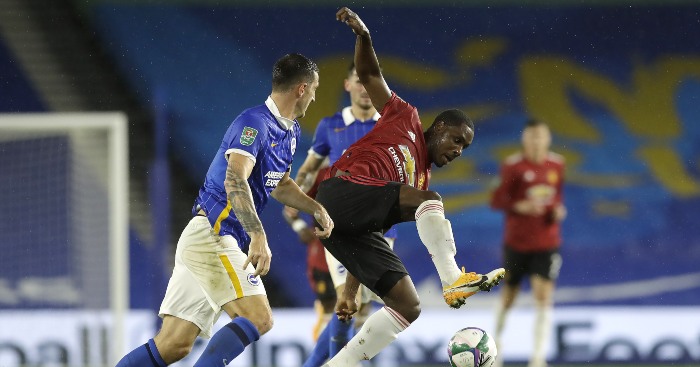 “We’ve got many defenders here,” said Ole Gunnar Solskjaer as he dismissed questions about Manchester United buying a new centre-half after they conceded their fourth and fifth goals of the nascent Premier League season against Brighton. He clarified his point – “for me, we’ve got enough good centre-backs here at the moment” – but that only made things worse. ‘Good’ should not really be the benchmark for Manchester United; it’s Brighton and Palace who should be boasting about ‘good’ centre-backs, not United.

For weeks, United have been briefing the media that they are steadfastly not interested in central defenders – much to the confusion of fans who have been subjected to the clumsy stylings of Victor Lindelof – but on Wednesday night there was a reminder that United have a centre-back rather better than ‘good’ if only he is given the chance. Eric Bailly is so far ahead of Lindelof – and indeed Harry Maguire – that it seems ridiculous that he has been restricted to Carabao Cup duty and a late, late Premier League cameo. That surely has to change.

“I think Eric played well again, he knows how highly we value him,” said Solskjaer, who emphasised the need for the Ivory Coast international to remain fit, which seems like the one element that is a) out of his control and b) irrelevant now that he is fit. Regardless of whether he played ten, 20 or 50 games last season, United now have to build around a partnership of Bailly and Maguire if – as seems certain – the club has decided that they cannot justify more extravagant spending so soon after the defensive record purchase of their captain.

The message has been consistent – right-winger, left-back, striker if possible – and the need for the latter was absolutely exposed on Wednesday night, with Odion Ighalo looking a million miles away from good enough. The decision to spend a reported £10.5m to extend his loan spell until January now seems like a waste of a reported £10.5m. His shortcomings mean that an off-the-pace Anthony Martial (he has had two shots on two games) has missed only a handful of minutes in the Premier League so far. Of United’s ten goals in all competitions, none has been scored by an out-and-out striker.

Ighalo is really our striker because he sleeps in United pyjamas btw, give me 3 months in the gym and a no kebab diet and I can do his fucking job if you want a United fan upfront

United have options to replace Martial, but both those options would weaken the side elsewhere. Right now, United’s second-best striker is their best right-winger and their third-best striker is their best left-winger; while Wednesday night gave fans hope that there is an answer to some of United’s defensive woes, it did nothing to convince them that problems could be so easily solved at the other end of the pitch. As Andy Cole says of Martial: “One week he can be absolutely fantastic and then another week it’s like ‘what happened to him?’ It’s like his twin brother is playing.” United need an option for the twin brother weeks.

That is why United are being linked with Luka Jovic and not Dayot Upamecano, and with Edinson Cavani and not Kalidou Koulibaly. There is clearly a reluctance to strengthen an area that has had significant investment over the last four years while there is such an obvious gap further up the pitch. It was forgotten amid the giddiness of their late-season form, but United have still not replaced Romelu Lukaku with anything other than short-term fixes.

United do have many defenders but they really do not have many strikers worthy of the name.