Home Johnny Nic Man United are a zombie club; can fans change that? 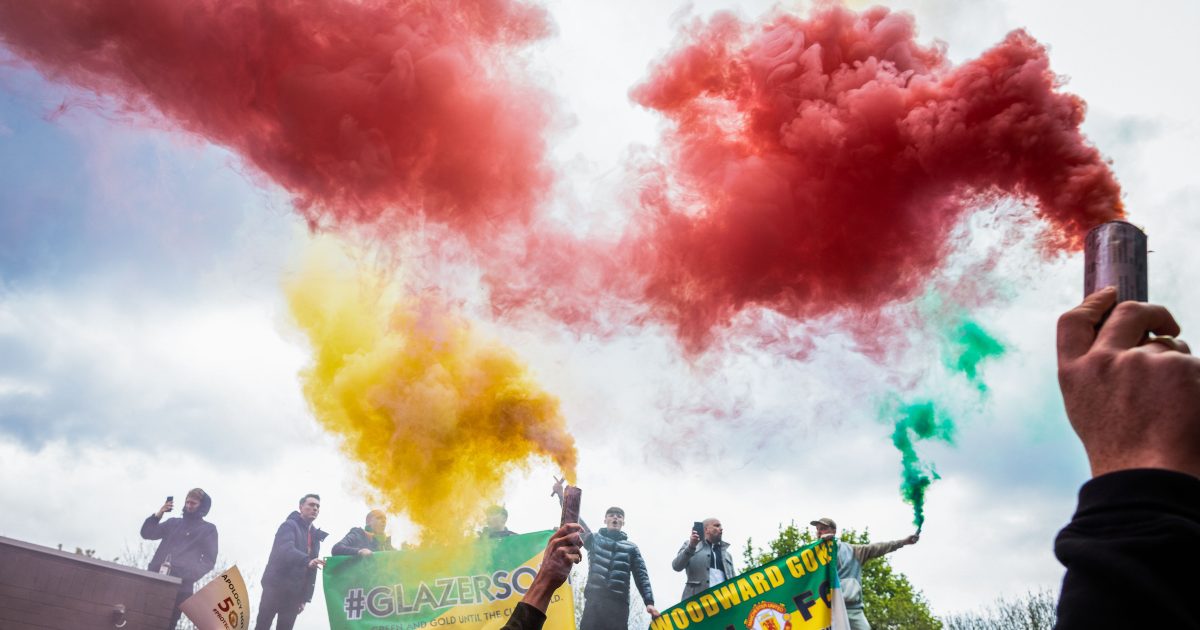 So was Sunday’s protest at Manchester United a good thing? Yes and no.

Shutting down the biggest game in English football down is a substantial achievement. It was a very effective protest. It was not expected by anyone, least of all the club who just thought fan protests would go on outside the ground and be quite easy for the Glazers to ignore in America. But get the game against Liverpool called off? That’s huge.

Was it a good thing or a bad thing?

Smashing a copper in the face with a bottle is definitely bad. It just makes people think those involved are all thugs, morons and idiots. It also gives the media an excuse to go down the usual line they take about people who go to football matches: you can’t trust them. And more than all that, you’ve really badly hurt someone. Not acceptable.

On the plus side it has raised the issue of the club’s ownership in a dramatic way. They have disrupted the smooth running of a football match, albeit for an afternoon. It has made everyone stop and think about what it all means. It’s all over the media. It may have inspired others too.

Will this make the Glazers quit? Not a chance. But then, this was never going to move the boulder in one push. It’s promised to be only the start of a campaign to be regularly disruptive, which could cost the club money in fines and additional policing. Yes, they may get points deductions, but this cause is bigger than anything that is happening on the pitch.

And what are fans to do when they have exhausted every other route? Lip service is paid to them but nothing changes. Those who say to keep on protesting in ways that have been well tried for a long time now, are naive. I’m sorry to say it but regular, polite protests will not have any effect on the Glazers; they never have and they never will. They’re coining it massively from the club and will be happy for fans to let their views be known about them. They’ll absorb the criticism to allow fans to let off steam and then plough on regardless.

This is how we are kicked around by people with power and money more generally. They do not expect us to exercise upon them the sort of disregard they place on us. Not for nothing were these people called snakes, being two-faced in negotiating with UEFA for the Champions League changes all the while plotting a super league. They are not trustworthy in the slightest. You can’t deal with them like they are normal people: they are abnormal.

The only thing that will get them out of the club is the massive reduction in the value of their asset, or if it becomes just too much of a pain in the arse. That’s the only thing they understand, the only thing that matters to them. So how do you make that happen? Well, disrupting games is one way to do it. Not buying the games on TV is another. Never buying tickets is one more. Putting fans on picket lines outside of the hotels the team stays at, yet another. Ask the players to cross a picket line and you may find some will not. In a revolution the first thing you do is get the army on your side. In football getting the players on your side is key. 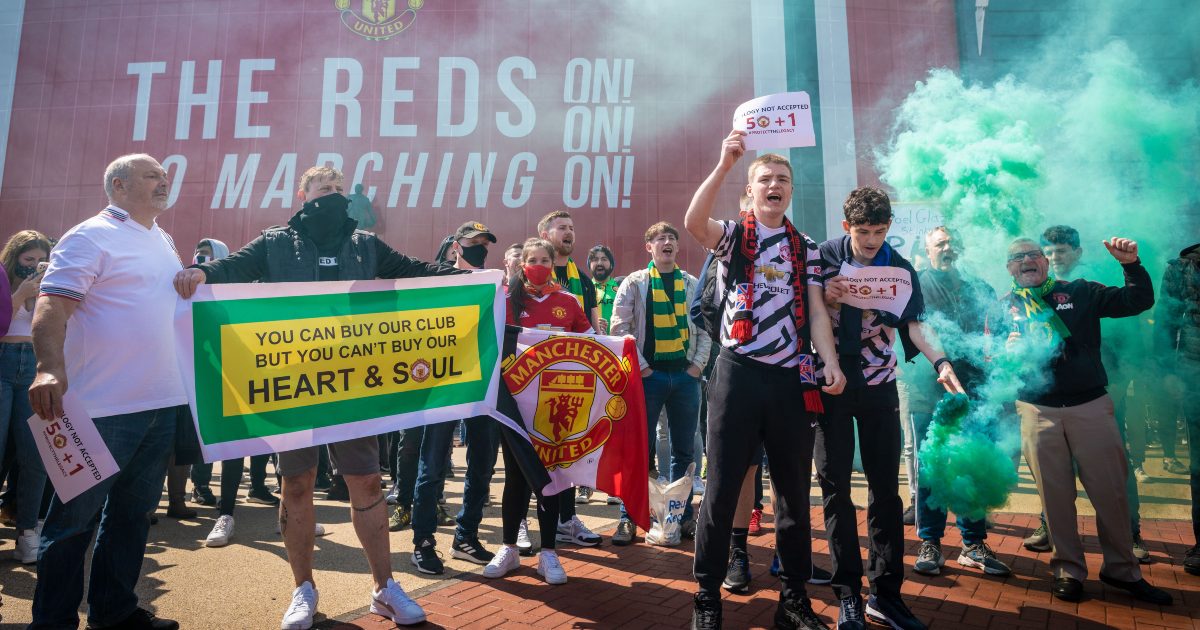 But that’s where the problems start. It’s not the players’ fault who owns the club. Asking them to join fans in trying to get owners to relinquish the ownership is putting a lot of weight on them. But then they are the prime beneficiaries of the Glazers ownership in terms of their massive wages. So, to those who benefit the most, the greatest pressure must come.

But do they agree? Do they care much? Do they want new, possibly poorer owners paying them less money? They’re here today, gone tomorrow. Maybe it’s unfair to ask them to be football freedom fighters.

The trouble is, an invasion like this will brand football fans as hooligans. The hurt and damage caused will be all the proof they need. It also paints the idea of fan ownership as letting wild dogs into the boardroom.

There are people who claim we don’t want disorder but what if disorder is inevitable if you are going to wrench a football club from the greedy hands of its owner? Then what?

Getting the Glazers out, while hard, might be possible…but then what? Revolution is desirable but what happens afterwards? Does it matter? Is breaking the club the main aim and then we’ll just see what rises from the ashes? Because it is hard to see how Manchester United can be owned by anyone isn’t an absolute twat. Are fans prepared for the club to be poorer and stop being the biggest wage payers in return for significant fan ownership? This is a revolution that requires rethinking everything.

There’s no point in swapping the Glazers for another grotesque family, another petro-dollar fascist, another asset-stripping, financial corporation, another nation state or murderous royal family. They will not be better owners and this will all just start again.

This version of Manchester United will cost someone a couple of billion quid. That’s the problem. How does United or any other club get responsible owners in this environment and owners who will cede a hefty slice of control to fans themselves?

None of those are impossible but do seem unlikely. Asking the owners to invite fans to be involved in decision-making via something like the Supporters Trust seems a pipedream. These people do not want less control or power over their assets.

The only other solution is to break the club by a hard-line boycott of everything to do with the club. Do everything possible to destroy the value of the club. Make it ungovernable. Shut it down until the Glazers are forced to sell it to some sort of fan consortium for a low price? It’s a romantic idea, but is it realistic? 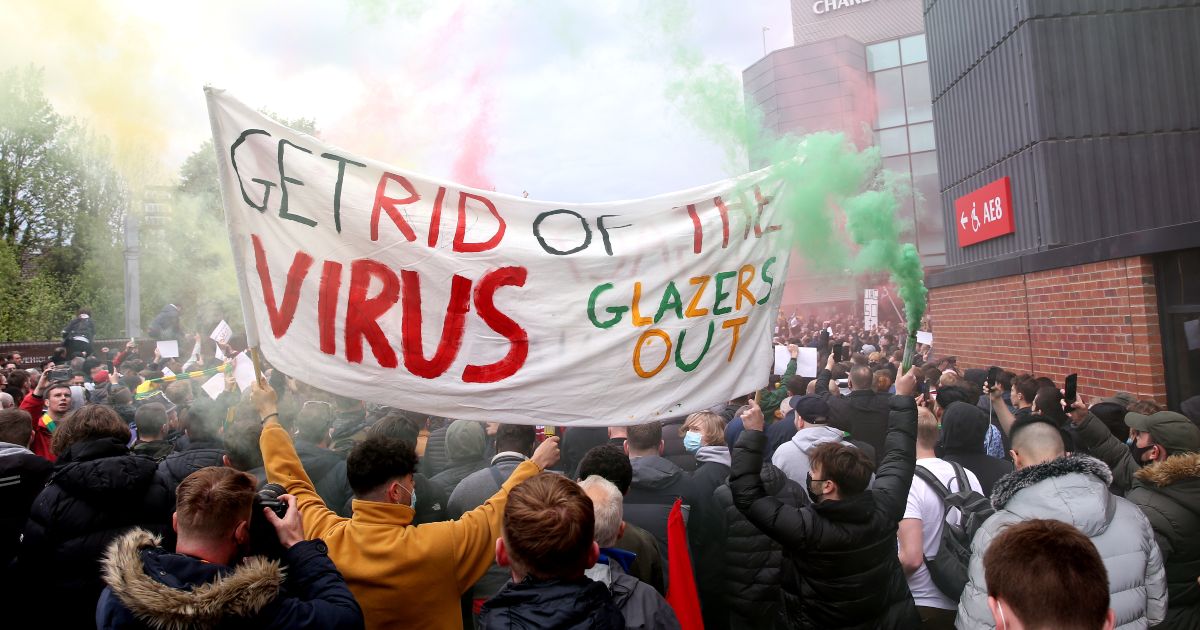 One thing is for sure. The heart and soul of United has long gone. The club’s get up and go has got up and went. It’s called Manchester United but it is just wearing the club’s history as a veneer to try and fool people into thinking it is unchanged from the old days. It isn’t. Fans know it’s a sort of fake United. As Jonny Liew put it so well, “ Old Trafford, a giant merchandise stall with a football stadium attached”. It is treated as a mere global sporting brand like so many others. As soulless as any big brand is soulless. Hollowed out and stuffed with debt, it is staring at the world through dead eyes.

So by wrecking the club and shutting it down, you are not losing Manchester United, you are losing the zombie club that pretends to be Manchester United. So cut it loose. If their fans can let this fake go, for the greater long-term good, it could yet all end happily.

So was Sunday’s protest a good thing? Yes and no. The future is more uncertain than it was. And that’s got to be a good thing when the status quo is so toxic it is polluting the clean waters of the rest of football. Almost everyone in football understands and empathises. The only divergence is in the means of protest. But the ways of protest of the past haven’t worked.

We have all the power as a collective, but it is a power that needs using with thought for consequence and responsibility. It shouldn’t be diluted by stupid hooligans riding on its back committing random acts of violence. Keeping the moral high ground is crucial and the media will take it away at the first chance, but that shouldn’t mean not protesting in as disruptive a way as possible, for as long as needed. Nor should it let the Premier League and others rob and neutralise the agenda away from the fans, as they try to paint all involved as violent thugs.

So where does that leave us? Are we any further forward? Is this just the scream of protest at the powerlessness we all feel in 2021, with our lives governed in so many ways and on so many levels by the weird whims of rich wankers?

It has not solved anything, but it has put a lot of questions front and centre. Whether that’s all it’ll do is yet to be decided. Whether it’ll inspire others to make their protests is unknown, but these are interesting times, Interesting. Very interesting.

The wheel is now in spin. But who will be the winner when it stops? That, as ever, is in the hands of the people.