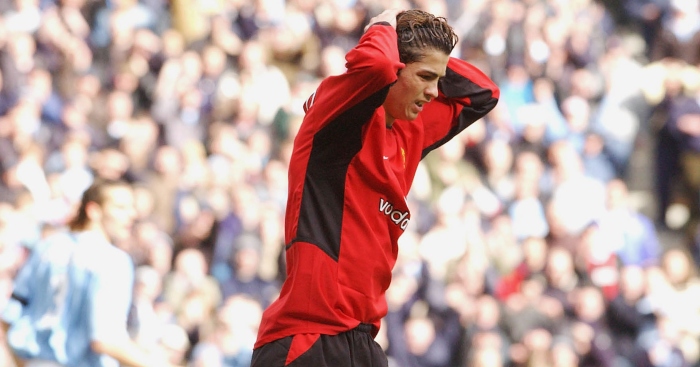 Tottenham 4 Manchester United 1 (January 1, 1996)
“We will play William [against Tottenham] and what we will see is how he defends away from home. There is always that thing about European defenders and how quickly they can pick up the pace. It’s a far quicker tempo here.”

We saw how he defended. It was awful. In truth, Manchester United did not play disastrously but that makeshift defence absolutely did, with Chris Armstrong scoring two goals.
Next: Somehow, somehow, United remained unbeaten over the next 12 games and destroyed Newcastle’s 12-point lead at the top of the table. Oh and Prunier never played for the club again.

William Prunier is rejoicing by the day at the defence frailties. His name is dropping further down the list of worst CBs ever at United by the game.

Newcastle United 5 Manchester United 0 (October 20, 1996)
Excuse us while we watch that Philippe Albert chip over Peter Schmeichel to make it 5-0.

This was a delicious victory for a Newcastle side that started the day two points clear of fifth-placed but still-unbeaten Manchester United. Albert’s is the goal we remember but Darren Peacock, David Ginola, Les Ferdinand and Alan Shearer also scored against a tasty team that read: Schmeichel; Neville, May, Johnsen, Pallister, Irwin; Beckham, Butt, Poborsky; Solskjaer, Cantona.

Sir Alex Ferguson blamed it on a “mentally and physically exhausting” trip to Turkey for a Champions League tie; Sean Dyche will no doubt sympathise.
Next: Well….

Southampton 6 Manchester United 3 (October 26, 1996)
Excuse us while we watch that Matt Le Tissier chip over Peter Schmeichel to make it 2-0.

The goals did not end there as Le Tissier, Egil Ostenstad and Eyal Berkovic combined to destroy a United side supposedly improved by the additions of Paul Scholes and Roy Keane. This time they had not recently returned from Turkey.
Next: They lost at home to Chelsea but then embarked on a 16-game unbeaten run that took them from sixth to first, where they would remain and lift the title.

Chelsea 5 Manchester United 0 (October 3, 1999)
What a way to sacrifice a 29-game unbeaten run in the Premier League. Gus Poyet scored after 27 seconds, Massimo Taibi dropped a bollock, Nicky Butt was sent off for kicking Dennis Wise, even Chris Sutton scored a goal. It was Christmas come very early indeed for ABUs.
Next: Defeat to Spurs followed three weeks later but United then picked themselves up, dusted themselves down, cast off  the hapless Taibi and won the title by 18 points. This was a different world – when Arsenal’s 73 points put them in second rather than fifth.

Manchester City 4 Manchester United 1 (March 14, 2004)
Just days after exiting the Champions League at the hands of Jose Mourinho’s Porto, United were a goal down within three minutes to a goal from Robbie Fowler. Jon Macken, Trevor Sinclair and Shaun Wright-Phillips were also on the scoresheet as a team featuring Ronaldo, Paul Scholes, Ryan Giggs and Ruud van Nistelrooy was humiliated.
Next: They beat Tottenham 3-0 at home but further defeats to Portsmouth, Liverpool and Blackburn left them languishing in third. Man City? They would finish the season in 16th.

And that was just one of the comments from Roy Keane on MUTV about the abysmal football played by United in this shellacking by Middlesbrough, who were inspired by Gaizka Mendieta.
Next: United beat the defending champions Chelsea 1-0, beginning an 11-match unbeaten run that would take them from seventh to second, where they would stay until the end of the season. And Keane would never play for United again.

Manchester United 1, Liverpool 4 (March 14, 2009)
After 11 straight Premier League victories – punctuated by THAT ‘Facts’ speech from Rafa Benitez – crafted a seven-point lead at the top of the table, Liverpool came to Old Trafford and punctured the joy. Fernando Torres destroyed Nemanja Vidic, Steven Gerrard kissed the camera and Andrea Dossena did a goal. It was United’s heaviest home defeat in 17 years.
Next: Man United lost their next game 4-0 to Fulham – the first time in five years they had lost back-to-back games – but recovered to remain unbeaten for the rest of the season and claim the title.

On this day in 2009, Liverpool came from 1-0 down to beat Manchester United 4-1 at Old Trafford. Fernando Torres, Steven Gerrard, Fábio Aurélio and Andrea Dossena were the goalscorers on the day. #LFC pic.twitter.com/ZiTnyfAqjy

Manchester United 1 Manchester City 6 (October 23, 2011)
Oh wow. This was their heaviest home defeat for 56 years and the first time they had conceded six at home since being shafted 7-4 by Newcastle in the relegation season of 1930/31. Ten-man United (Jonny Evans had seen red) were heading towards a less embarrassing 3-1 defeat but they collapsed in the final minutes to complete the total humiliation of being shafted on their home turf by their noisy neighbours.
Next: United remained unbeaten in their next nine Premier League games but eventually lost the title on the final day. Aguuuuuueeeeeeeerrrrrrrooo.

Manchester United 0 Liverpool 3 (March 16, 2014)
David Moyes’ side had already lost away to Liverpool, Manchester City and Chelsea, but this was total humiliation at home for Moyes, whose side mustered just one shot on target against Brendan Rodgers’ title challengers. Steven Gerrard scored two penalties and missed another, while Luis Suarez tore United apart.
Next: Little over a week later, United lost again to Manchester City by the same scoreline. A month later, Moyes was gone and United finished in a lowly seventh.

The last time United lost 3-0 at home was in 2014 against Liverpool and soon after David Moyes was sacked.

I’m not calling for anyone’s head, but beginning to lose mine watching United 😡🇾🇪

Leicester City 5 Manchester United 3 (September 21, 2014)
The first time in 30 years that Man United had lost having led by two goals, with Louis van Gaal’s side 2-0 and 3-1 up before collapsing after a controversial penalty. “Leicester had five shots on goal, and that was it. These five goals were existing because we made errors in ball possession,” said Van Gaal. It cannot have helped that Tyler Blackett was somehow keeping Chris Smalling on the bench.
Next: United lost only one of their next 15 games but could never quite pull themselves higher than third. They ended the season in fourth, which at least got them back into Europe.

Chelsea 4 Manchester United 0 (October 23, 2016)
It was The Return. But in the end it was The Rout, The Humiliation and The Total Humiliation. It took only one minute for Pedro to score the opener and it only got worse. “We made incredible defensive mistakes,” said Jose Mourinho. The more things change…
Next: United went 25 games unbeaten but – much to everybody else’s amusement – they never managed to lift themselves higher than fifth. In the end, their sixth-place finish was irrelevant as a Europa League got them back into the Champions League.

Manchester United 0 Tottenham Hotspur 3 (August 28, 2018)
This was only the seventh time in Premier League history that Manchester United have lost by three goals or more at home. Though it is important to note that from a “tactical point of view”, they didn’t lose at all.  Read the 16 Conclusions from that game here.
Next: We wait…