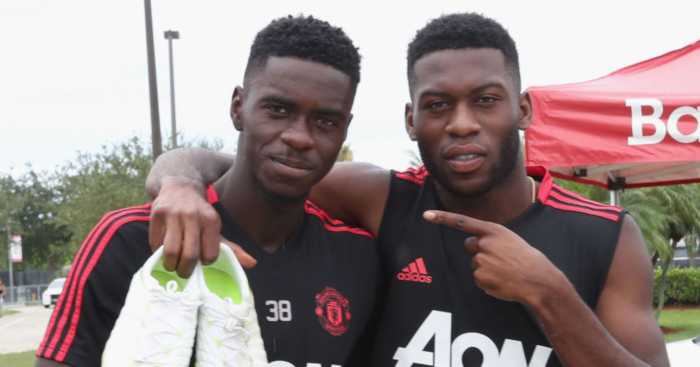 Friendly fire
What was the biggest story at 9am on Thursday morning after the immense drama of a Championship play-off semi-final involving Leeds, Derby, Marcelo Bielsa and Frank Lampard – two big teams and two huge managers in their own right?

Way to make it sound like Chelsea just went on a jolly old jaunt to the United States to improve their bank balance.

Sarri not Sarri
Never mind the ‘money-spinning (charity) FRIENDLY’. What about the future of Maurizio Sarri? Not a day can go by without him being under pressure, of course.

‘Maurizio Sarri fears his Chelsea future is in jeopardy,’ Matt Barlow writes in the Daily Mail. ‘He has sought assurances and received none, yet continues to do things in very much his own way.’

How bloody dare he?

‘Take this trip to Boston. Sarri must know exactly how Chelsea owner Roman Abramovich feels about the game billed as the ‘Final Whistle on Hate’ in Boston.

‘It is a matter close to the heart of Abramovich, a Russian billionaire with an Israeli passport who devised a plan with Robert Kraft, owner of New England Revolution, to help football combat anti-Semitism and other forms of discrimination.

‘The owners have each donated more than £770,000 and Sarri’s public complaints about the fixture’s inconvenience went down badly.’

And yet they were entirely understandable. The friendly, while for a wonderful cause, required Chelsea to fly out to the United States shortly after the end of the Premier League season and play on a difficult surface a fortnight before the Europa League final. It risked unnecessary injuries: just ask Ruben Loftus-Cheek.

And Sarri actually noted that “we go there for a good reason I think, so as a man I am very happy to go there”. His issues were “as a coach” as he felt that “the team now needs rest”. So to point out that ‘Sarri must know exactly how Chelsea owner Roman Abramovich feels about the game’ is irrelevant: he knew of its importance and never once questioned the motive behind the friendly.

For a manager whose remit would have included winning a trophy in his first season, ‘public complaints about the fixture’s inconvenience’ seem pretty fair.

‘Chelsea directors must look at the style with which Pep Guardiola fronts Manchester City or the passionate bond Jurgen Klopp and Mauricio Pochettino have with fans and wonder if they might get more from their manager on this front.’

They might also look at how Sarri has finished third in the Premier League and reached two cup finals having been able to sign just one permanent outfield player in his first season as a manager in England. There is not a great deal more they could get from their manager on that front.

‘Sarri does not enjoy his media duties and rarely looks like a man having a good time.’

And you wonder why?

‘There is no chemistry with the Chelsea supporters. His superstition of never stopping on to the pitch means he rarely goes over to the fans after away games and he opted out of the end-of-season lap of appreciation.’

Again, you wonder why? His efforts have hardly been ‘appreciated’ this season.

‘The football in his first season has been fitful and dependent on the brilliance of Eden Hazard, although Chelsea have reached two cup finals and finished third.’

That ‘although’ is doing an awful lot of work.

Anyway, he was asked to implement an entirely new style of play with an unbalanced squad that finished fifth the season prior. And his only first-team signings were Jorginho, Rob Green, Kepa, Mateo Kovacic and Gonzalo Higuain, two of whom joined on loan and one of whom was a free back-up keeper.

How surprising that the football was ‘fitful’.

Oh, and for how many other managers would being ‘dependent on the brilliance’ of their best player be a criticism? Should Sarri have dropped him as soon as he started playing well?

Axel F
Over at the Manchester Evening News, Samuel Luckhurst tells us that ‘Manchester United might have already signed their next captain’. This sounds bloody interesting, particularly considering they obviously haven’t signed anyone yet.

What follows is perhaps the most confusing piece ever written, promoting Matthijs de Ligt as a ‘game-changer’, pitching then instantly rubbishing Daniele De Rossi’s potential as the new dressing-room leader and regretting that Diego Godin wasn’t pursued. All of whom have obviously not ‘already signed’, making the headline awfully weird.

Thirteen literal paragraphs into the piece, the identity of the ‘homegrown solution’ is finally revealed. Luckhurst says ‘it would be a travesty’ if Axel Tuanzebe is not given a proper first-team chance next season. And at this point Mediawatch must remind you that he is pitching him as the next Manchester United captain; he’s been there for four years and has barely bloody played for them.

The article ends on these three paragraphs:

‘Already United are extracting positives from an upcoming Europa League campaign. The relative serenity of the competition has been viewed as an opportunity to develop their teenage talents and introduce Dean Henderson to United first-team football, should David de Gea depart. Tuanzebe, a Rochdale-raised academy graduate, was actually considered to start the 2017 Europa League final by Jose Mourinho, is a veteran of three pre-season tours and signed a new contract last year.

‘On Monday week, he will start in the Championship Play-off final for Aston Villa, captained by the 23-year-old Jack Grealish. De Ligt is only 19 and storied clubs and countries have appointed callow captains over the decades, be it Bobby Moore (22 years and 48 days) with England, Ray Wilkins at Chelsea (18), Tony Adams (22) at Arsenal or Fernando Torres (19) at Atletico Madrid.

‘And United said there would be a cultural reset.’

Are you genuinely proposing that a 21-year-old with 305 minutes of top-flight football in any country captain Manchester United? Have we all lost our collective minds?

No way, Jose
The Daily Mirror‘s Darren Lewis has spotted those recent Jose Mourinho quotes. They have clearly piqued his interest.

‘He would have poured himself a large one after seeing Manchester United finish so far behind rivals City that they needed binoculars,’ he writes.

‘Jose Mourinho will also feel vindicated after his former side ended the season 32 points off the pace – the furthest behind they have finished since returning to the top flight in 1975.’

Well the gap to first place was 19 points when Mourinho was sacked in December. Quite why he will ‘feel vindicated’ that a novice manager only extended that by 13 points after being parachuted in mid-season is a mystery.

‘His critics called his football joyless and rounded on his man-management after his very public falling out with Paul Pogba and his treatment of Luke Shaw. And, following the stunning upturn in results under Ole Gunnar Solskjaer, Mourinho was dismissed as dated, with his leadership style criticised as autocratic.

‘Now, though, as United are vilified for being in disarray on and off the pitch, it is the Special One who is having the last laugh.’

The gap to fourth place was 11 points when Mourinho was sacked in December. Quite why he ‘is having the last laugh’ when a novice manager reduced that to five points after being parachuted in mid-season is a mystery.

Revelation of the day
Lewis also writes the following:

‘And, as Mirror Sport revealed yesterday, while City and Liverpool have a careful, strategic approach to transfers, United retain a scattergun policy.’

Bloody hell. How have you managed to uncover that nugget of information? The Pulitzer Prize for Investigative Reporting is on its way.

Hotel hell
After shedding a light on the VENDETTA against Manchester City on Wednesday, The Sun lead their back page again on the Premier League champions

‘BLUE NOT DISTURB!’ screams the headline to Martin Blackburn’s exclusive, as we are told that ‘City book Wembley hotel for next year’s cup finals’.

The cheeky sods. They probably will win everything in 2019/20 but booking hotels so far in advance seems more arrogant than proactive.

‘Confident Manchester City are already targeting a second treble – after block booking their hotel for both cup finals NEXT season.

‘Pep Guardiola’s men will stay at the Wembley Hilton for Saturday’s FA Cup final with Watford, as they look to complete an historic domestic clean sweep.

‘City are determined to dominate for years to come and their preparations are so detailed that they have booked their lucky rooms for August’s Community Shield, as well as the FA Cup semi and final, plus the Carabao Cup showpiece next season.’

Well the Community Shield is fair enough; they are definitely in that. But booking ‘their lucky rooms’ for next season’s Carabao Cup final and FA Cup semi and final is a bit much.

‘They are being given preferential treatment by having first refusal on the hotel – just yards from the stadium – if they want to book again.’

Oh. They just have ‘first refusal’. Which patently is not the same thing whatsoever.

‘A source told SunSport: “There is an understanding that they get first pick on the hotel for any domestic cups. They have already got things sorted for next year.”‘

And now ‘there is an understanding that they get first pick on the hotel’ if needs be. So they have not ‘already booked their Wembley hotel for NEXT season on night before every major final’ at all.

Informative headline of the day
‘How to watch Man City vs Watford in the FA Cup final for nothing’ – talkSPORT.

By turning on BBC One at 5pm on Saturday evening?

Recommended reading of the day
David Conn on Manchester City.