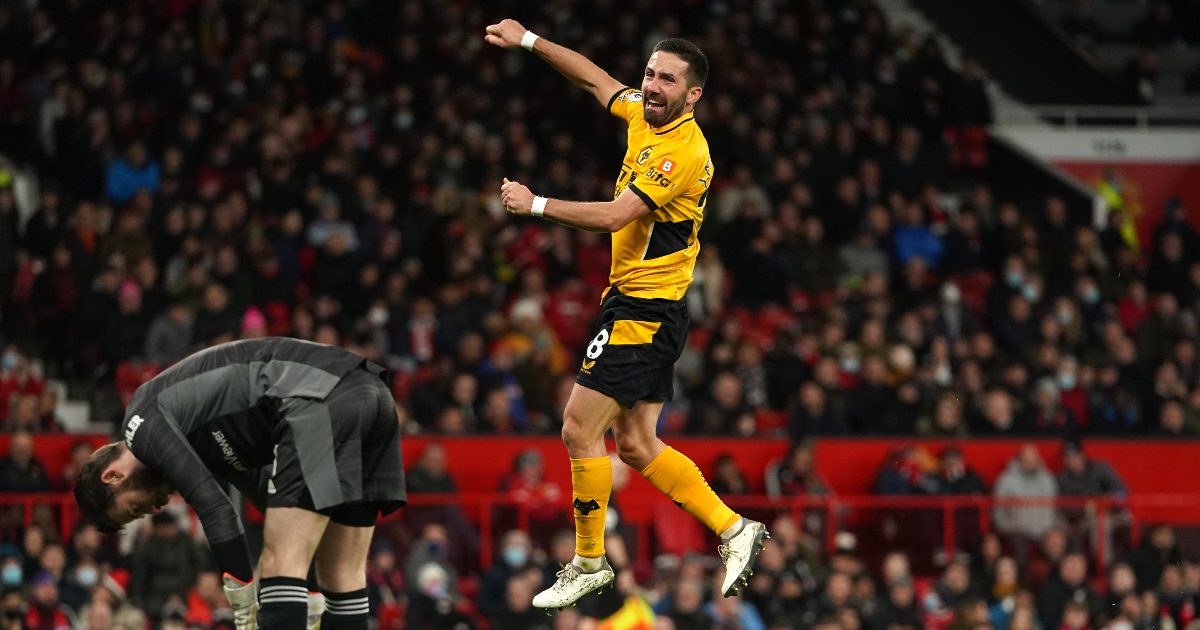 Man Utd were nowhere near their best as they were beaten at Old Trafford by Bruno Lage’s Wolves via Joao Moutinho’s winner late on.

United’s poor showing was punished by Wolves. Lage’s side were impressive as they caused the hosts problems throughout the 90 minutes.

Moutinho scored the winning goal for his side inside the final ten minutes on Monday evening.

Wanderers had failed to win in their last 10 league games at Man United and it looked like that run might continue after they failed to score in a one-sided first half in which they managed an eye-watering 15 shots.

Phil Jones, making his first appearance in 708 days, was one of the few to impress for United, who belatedly showed flickers of life after Ralf Rangnick’s decision to take off lively attacker Mason Greenwood was booed.

Replacement Bruno Fernandes struck the bar and then sent over a free-kick that Cristiano Ronaldo directed home from an offside position.

But Romain Saiss also hit the woodwork from a free-kick and Wolves found a way through in the 82nd minute, when Moutinho controlled a clearance and hit a low drive past David De Gea to send the travelling hordes into raptures.

There was a similarly impressive roar at the final whistle after goalkeeper Jose Sa superbly saved Fernandes stoppage-time free-kick to seal victory.

This was United’s first loss since the 4-1 defeat at Watford that led to Ole Gunnar Solskjaer’s exit and the writing was on the wall from the outset on Monday, with Daniel Podence getting away a dangerous early shot.

The resulting corner brought another test for De Gea. The ball was only cleared as far as Ruben Neves, who flicked the ball up and unleashed a long-range volley that United’s number one tipped over.

There were further attempts from distance before Nelson Semedo stung the palms of De Gea, with Podence trying his luck from an acute angle.

The only moment of note that United had managed until that point was Jadon Sancho’s blocked strike following superb play by Greenwood.

Aaron Wan-Bissaka sent a cross just over Ronaldo’s head midway through the first half, but the pair looked more intent on shooting themselves in the foot with poor decision making at the other end.

Ronaldo was particularly lucky when his woeful back header was pounced upon by Wolves, only for Raul Jimenez to nod off target from an offside position when the cross came back.

Edinson Cavani missed the target when he had time to do better and the impressive Jones put in another important tackle just before the break.

United returned with a little more zip but were still struggling to create clear-cut chances against a Wolves side that threatened on the break.

A number of fans booed the decision to replace Greenwood – United’s best attacking player – with Fernandes, although the Portuguese did receive a warm ovation and came close to an immediate impact.

Sancho took a quick throw and Nemanja Matic drilled over a low cross that Fernandes met with a thumping effort that rattled the crossbar.

United found the back of the net moments later. Fernandes sent over a free-kick from the right that Ronaldo bundled home in front of the Stretford End, but the stand-in skipper was rightly ruled offside.

The 36-year-old dragged across the face of goal and Scott McTominay saw a mazy run halted before he could get away a shot.

Substitute Adama Traore had a dangerous burst of his own ended, with Matic’s foul setting up a Wolves free-kick just outside the box that Saiss struck off the bar with 15 minutes remaining.

It was agonisingly close to a memorable winner that would instead come from the boot of Moutinho.

Good build-up play led Traore to clip in a cross from the right, which was only cleared as far as the veteran midfielder. The 35-year-old took a touch and rifled home a low right-footed shoot from the edge of the box.

United desperately searched for an equaliser and Sa’s stoppage-time save prevented Fernandes finding it from a free-kick.