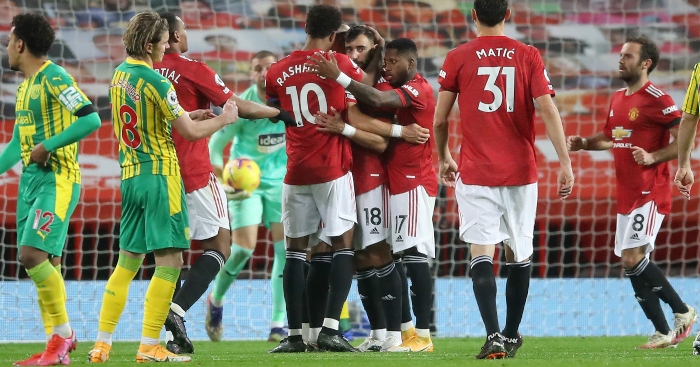 Bruno Fernandes was involved in penalty drama at both ends against West Brom as the midfielder secured Manchester United’s first home league win of the season.

West Brom – without a victory since promotion back to the Premier League – made life difficult for United, who eked out a 1-0 win thanks to Fernandes’ penalty after the video assistant referee’s intervention during a frantic start to the second half.

Referee David Coote pointed to the spot after adjudging Fernandes to have taken down Conor Gallagher in the box but overturned his decision after reviewing the incident on the advice of VAR.

Peter Bankes came to the Portuguese’s assistance again shortly afterwards, having spotted Johnstone strayed off his line when saving his penalty following a Darnell Furlong handball.

Fernandes fired home the retaken spot-kick to ensure United’s wait for a Premier League win at Old Trafford did not extend into December.

After a build-up dominated by the cyber-attack on the host club, Solskjaer’s side were denied a dream start as Johnstone reacted superbly to stop Martial glancing home Juan Mata’s free-kick inside 100 seconds.

United kept the Baggies penned back as they searched of an early opener but a mixture of dogged defending and poor final passes prevented another clear-cut chance until the 16th minute.

Harry Maguire cut out an undercooked pass inside own half and bursts forwards, eventually playing out to Marcus Rashford on the left.

The forward’s fizzing ball across the box was met by a first-time touch by Fernandes into the path of Martial, whose low shot was saved well by Johnstone.

The France international should have done better and saw penalty appeals rejected shortly after Matheus Pereira sent a lovely ball through for Karlan Grant to get away a strike that was deflected wide.

It was a rare voyage forwards by the Baggies, who saw Kyle Bartley direct an unorthodox header just over David De Gea’s goal as the opening period came to a close.

Bilic’s side returned from the break strongly and referee Coote swiftly pointed to the spot having seen Gallagher go down under a challenge from Fernandes.

The irate Portuguese midfielder claimed he got the ball and eventually saw the decision overturned after the referee watched a replay of the incident on the advice of the VAR.

After Rashford saw a long-range effort superbly saved and Conor Townsend was thwarted by the feet of De Gea, Fernandes would again be involved in another penalty decision.

Coote pointed to the spot after Darnell Furlong’s handled a Juan Mata cross and the normally reliable United midfielder stepped up, only for Johnstone to save low to his left.

Bruno Fernandes makes no mistake with his second penalty after Sam Johnstone was ruled to be off the line from the first attempt… pic.twitter.com/mway3HwJpe

But the Baggies’ celebrations were cut short as the goalkeeper had strayed well off his line, with the VAR ordering a retake that Fernandes lashed into the top left-hand corner.

It was a gut punch that West Brom attempted to fight back from, with substitute Callum Robinson cracking a fine effort off the crossbar from the edge of the box in the 65th minute.

But while the visitors were making life uncomfortable for Solskjaer’s side, Johnstone was having to be at his best between the sticks.

The former United academy player showed superb composure and reflexes to tip a delayed Rashford effort wide, with the goalkeeper denying Maguire as they tried their luck again.

Furlong’s last-ditch challenge prevented Martial adding another in stoppage-time as United’s wait for a home win came to an end.