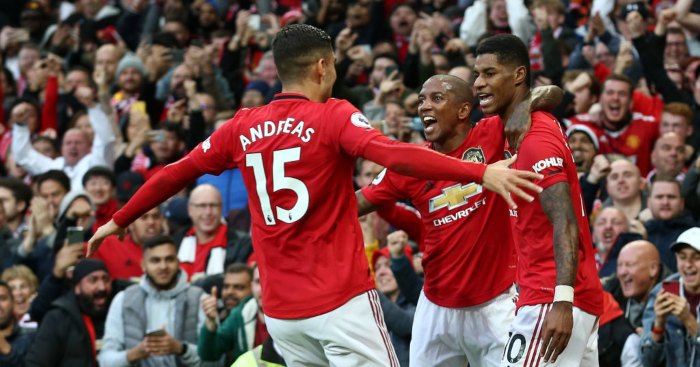 1) Let’s scale this one back. Just a bit. Not the rivalry, but the coverage. It’s exhausting in its current form. As rich in history as the fixture may be, does it really require two armies of media propagandists to clatter into each for days on end as its prelude?

It certainly doesn’t need 90 minutes of pre-match coverage on Sky, all of which seemed to pivot around the unanswerable question of What It All Means.

Am I being a killjoy? Probably, but it does feel as if the annual attempt to hoist a grand narrative on this game runs the increasing risk of creating parody. It is a big occasion, now with an intriguing inversion of the fallen giant dynamic, but the montages and faux gravitas and all the laboured reverence just get in the way of the game itself. By the time it kicks off, everyone’s senses have been deadened by the repetition.

The gap between these two sides is currently so great, that nothing Ole Gunnar Solskjaer said during the build-up was ever going to be decisive. Even so, his little poke at Liverpool in the week was badly timed.

“I am sure we will bounce back and win the league. And I am sure it won’t be 30 years until the next Premier League that we do win.”

Rule number one? Don’t give the opposition a team talk. It didn’t seem relevant in the end, but it might have been and so, hopefully, that’s the cue for him to retire his nostalgia routine.

Particularly as the game produced a Manchester United performance full of a welcome humility and honest grind, detached from the glassy-eyed, single tear rhetoric that Solskjaer has been pumping into the atmosphere.

3) This day needed a honest performance, too. Solskjaer’s team selection made a discouraging point about just how meagre his resources are – astonishingly so given the money paid to assemble this squad.

4)  Mohamed Salah’s failure to recover sent a ripple across Liverpool’s frontline, with Divock Origi replacing him, but Sadio Mane switching sides to the right. The logic, presumably, was to aim Mane’s dynamism at the Ashley Young-Marcos Rojo axis, which certainly looked the more vulnerable of the two and the best avenue for the player to exert his influence.

That was sound enough, but perhaps the cost outweighed the benefit. Instead of making one change, Jurgen Klopp really made two – and shifting Mane as well as losing Salah appeared to flummox Roberto Firmino, who started the game anonymously and never really became relevant

It’s not that Firmino is Liverpool’s best player, but he’s certainly their most important attacker. He’s the connecting piece of that attacking three and, as such, his effect depends on timings and understandings which, when removed, have the power to neuter his impact entirely and confuse the side’s general attacking function.

5) United came with a plan. Whatever general negatives may surround them, they made a good enough start. Given Solskjaer’s preference for counter-attacking football, it wasn’t a surprise to see a flurry of early chances arrive via quick breaks originating on Liverpool’s right.

Most often, it left Perreira as United’s most advanced player and responsible for the final pass or decision. He was okay. Decent. Fine. Good enough. Whether he’s actually an answer to one of their many questions is a different matter, though, because prominent though he may have, the options he took didn’t always make best use of those chances.

6) Liverpool’s slow start was counter-productive. United were the aggressor through the first half-hour. Other than those quick raids, they also had joy in the channels, with Rashford causing a few problems behind Trent Alexander-Arnold and also taking Virgil van Dijk out of his comfort zone.

It was strange, because it was exactly what United needed. That initial period quelled much of the fear that had manifested against Newcastle and, yet, it seemed as if Liverpool were allowing them to settle into their patterns. There was very little pressing and no obvious determination to explore United’s vulnerabilities; slowly, they were allowed to rebuild their confidence and it made the task far, far harder.

7)  So Liverpool deserved to fall behind and United earned their lead. It was a well constructed goal, too, and the kind of finish which needs to become a regular part of his repertoire. Neat, uncomplicated, efficent. Very well done.

But it shouldn’t have stood and the refusal to disallow it was a double failure – first from Martin Atkinson, who somehow missed the trip on Origi, even if was an exaggerated fall, and then from VAR, which continues this practice of ignoring really obvious mistakes (and upsetting absolutely everybody in the process).

8) There was a little bit of this involved, too:

Also: might just be me but I’ve seen a lot of incidents recently where you feel a player going to ground too easily and dramatically has been entirely counter-productive and convinced the referee out of a correct decision.

It’s still probably a foul, because Origi is certainly kicked, but it was very similar to the penalty incident at the end of the Liverpool/Leicester game before the international break. Origi’s reaction was disproportionate.

9) It got the handball right, though. Whether the law is correct or people agree with it is a different issue, but on the basis of precedents which have already been set, Sadio Mane’s goal was rightly ruled out.

10) What would the right diagnosis for that Liverpool first half be? Was that an inferiority complex derived from the fixture’s history? It was bizarre, because they’re such a powerful team and so obviously Manchester United’s superior at the moment, that it felt as if something psychological had to be at work.

Or it was tactical instruction gone wrong? We’re all wise in hindsight, but that would be very difficult to rationalise. This was a day for Liverpool to swagger into Old Trafford and carry themselves like a European champion. It was a game in which to throw early, heavy punches and remind United of their task’s size.

11) And a theory on Jordan Henderson: is he a game-changing player? Or, more likely, is he someone who plays up or down to the collective performance, but who doesn’t quite have the breadth of abilities to alter the flow of a game.

It’s not a hill to die on, but he’s celebrated so much for what, sometimes, can seem like an illusory value. Today was a good example of that. His intangibles are spoken of so often and described as his biggest asset so regularly, that you expect more in situations where something is conspiring against the team and when, collectively, they require a jolt from somewhere.

12) The verdict on United’s three centre halves? Well, it’s hard to be conclusive, because they just weren’t examined enough. What is clear, though, is that while Solskjaer is limited to selecting Scott McTominay and Fred in those deep midfield position, it benefits them to have the additional passing options and a consistently available out-ball.

It may not add to the attacking threat, but it does at least provide an escape from the high press and that’s particularly valuable given that – as shown at St James’ Park – neither player can be relied upon to pass the ball forward with any accuracy.

13) At a guess, Klopp was targeting that facility with his decision to bring on Adam Lallana. No, nobody foresaw him scoring the equaliser, many will have presumably forgotten he was even at the club, but Lallana has always been a pressing player and his introduction was presumably designed to focus some pressure on an area in which United had looked strangely comfortable.

Whether it had that specific effect is a different matter, but that would have been the explanation behind a change which seemed baffling at the time. And credit Klopp for the goal because, lucky as it was, Henderson certainly wouldn’t have made that run to the back post.

14) That was Marcus Rashford’s best performance in months. It was also a fairly accurate portrayal of his abilities and should serve as a template for how he’s used going forward. He’s a problem in the channels, a huge asset on the break, and a 7-out-of-10 finisher of chances. As long as he’s not asked or expected  to be more than that – which he has been, which he has suffered as a result of – then there’s no problem.

15) United’s performance was enjoyable. It didn’t come with a lot of style, but its tone was absolutely right. Unfortunately, they didn’t win the game and after all the effort they expended, that will be very hard to take.

That’s a problem with a likely legacy, too, because they were a side playing up to the occasion. They’ve taken all sorts of criticism over the past two weeks and this was a very encouraging response. But it was just effort, though, and as such has no real value going forward.

It was actually reminiscent of the performances teams like West Ham used to give against them in the 1990s, when United use to be beaten or held to a draw by a team who, invariably, would then go and lose to Coventry or Sheffield Wednesday the next weekend.

The challenge, then, is for this not to be a West Ham of a performance. Make it the standard, instead, and the foundations upon which a more detailed structure can be built.

16) And Liverpool? Fine. They played appallingly, but that’s just not what matters. Losing would have been very unfamiliar and while it wouldn’t necessarily have brought a collapse in form, it’s a problem which Klopp will certainly be pleased to avoid.

As it is, it was a point gained despite a rotten performance – and that’s always strangely satisfying for fans, at least –  and a home game next weekend against a dreadful Tottenham team who will likely roll over and beat themselves. They may not have played to their standard, but they’ve navigated another tricky part of town and remain on course.