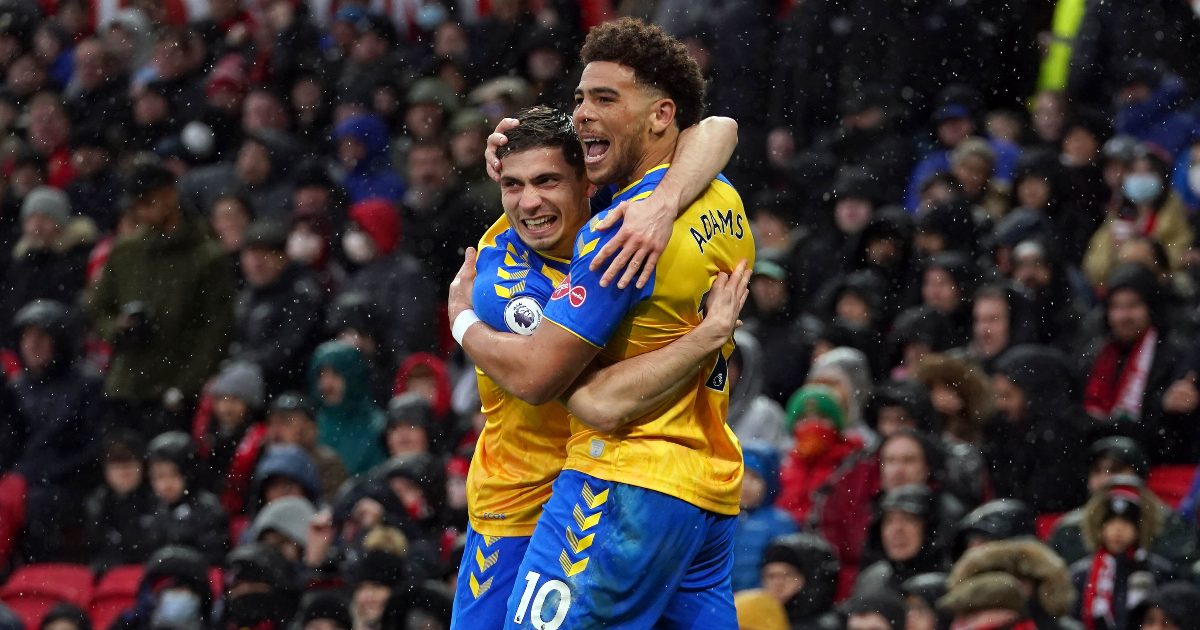 Che Adams equalised for Southampton just after the break to earn his side a point against Man Utd at Old Trafford on Saturday.

United have not been clinical in front of goal in recent games and that continued against Southampton.

They were ahead at the break thanks to Jadon Sancho’s goal but Adams grabbed a deserved equaliser in the 48th minute as the rivals drew.

Saints fans were in fine voice a year on from their side’s 9-0 shellacking at an empty Old Trafford, where Ralph Hasenhuttl frustrated former RB Leipzig colleague Rangnick on Saturday lunchtime.

Man United opened the scoring as Bruno Fernandes sent Marcus Rashford racing through to cross for Sancho to net after Romain Perraud cleared a meek Cristiano Ronaldo effort off the line earlier on.

But Saints were more than a match for the hosts and levelled three minutes into the second half as Adams sent a superb strike off the far post.

Southampton started brightly from the outset but United should have scored in the opening minutes when Ronaldo rounded Forster only to under-hit a shot that Perraud got back smartly to clear off the line.

The intense start continued as both sides had great chances in the ninth minute.

Unmarked Adams slipped as he looked to glance home a Kyle Walker-Peters cutback, before James Ward-Prowse’s strike was blocked by former team-mate Luke Shaw. United broke and Sancho led the charge, keeping the ball rather than passing it and Forster saved.

It was a wasted opportunity the summer signing made amends for in the 21st minute.

Fernandes sent a superb ball down the right channel that Mohammed Salisu failed to intercept, allowing Rashford to scamper behind the backline and cross to the far post for Sancho to direct home.

It was a well-executed goal that shook Saints, who had a chance to regroup after Scott McTominay joined Rashford in referee Stuart Attwell’s notebook for a poor challenge on Mohamed Elyounoussi.

Hasenhuttl spoke to his charges during that break in play and his side ended the half on top.

Stuart Armstrong drove wide of the near post from 20 yards after a neat one-two with Oriol Romeu, who sent a shot skipping wide as half-time approached.

David De Gea did well to hold an acrobatic Armstrong attempt and denied a low Perraud strike, with Paul Pogba seeing a goal against the run of play ruled out in first-half stoppage time as Ronaldo had strayed offside.

Southampton, who brought on Jack Stephens for Jan Bednarek at the break, continued strongly and needed just three minutes of the second period to level.

Elyounoussi smartly passed through to Adams, who was being played onside by Shaw and continued to send a superb right-footed effort in off the far post.

Armstrong dragged across the face of goal and the impressive Armando Broja tested Saints as they looked to pull ahead, with Fernandes heading a Ward-Prowse corner into his own side-netting.

United eventually settled and Forster had a busy spell. First he kicked clear a stabbed Maguire effort from a free-kick, before denying Ronaldo and compatriot Diogo Dalot in the same move.

But Saints soon returned to the attack, with Armstrong left free to drive just over before Broja roared through and just failed to get away a clean clipped effort.

It was an entertaining end-to-end spectacle that Ronaldo felt he had turned United’s way in the 72nd minute, but he was clearly offside as Sancho flicked on Fernandes’ free-kick.

United fans called for their team to attack as frustrations mounted, while at the other end the visiting supporters called for VAR after Maguire stepped on Broja’s calf in the box.

Forster got down superbly to push away a Maguire header in stoppage time and a smattering of boos greeted the final whistle.