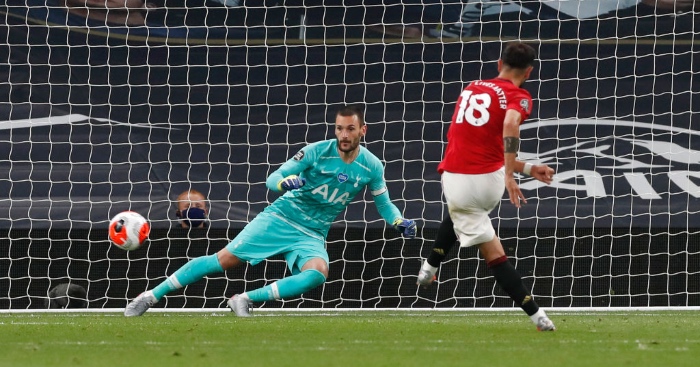 Manchester United were awarded their 22nd spot-kick of the season on Sunday – the most of any club in Europe’s top five leagues since Barcelona’s 24 in the 2014-15 season. They’ve won at least one penalty in 45% of their Europa league games, and in 34% of their Premier League games this season. But how many of them did they actually deserve? We’ve used top-of-the-range scientific analysis (opinion) to objectively (subjectively) work out whether Anthony Martial and co. are a bunch of diving cheats or are just quicker, sharper and better than the defenders that ‘foul’ them. The first was 371 days ago…

1) Manchester United 4-0 Chelsea
Marcus Rashford chopped the ball back on to his right foot while Kurt Zouma was focused on his left, tripping the United forward and pulling him to the ground for good measure. Clumsy if you’re kind; blundering if you’re not. We’re not.

Significance: Rashford stepped up to smash home the opener. Goals change games but Chelsea’s defence was shocking throughout.

2) Wolves 1-1 Manchester United
Paul Pogba ‘goes over’ the trailing leg of Conor Coady, who holds his hands in the air as every guilty footballer has done since the dawn of time.

Significance: Rashford resumed his role as penalty-taker and crashes the ball onto the post. Daniel James did equalise (jeez, this was a long time ago), but Palace won it in the last minute as De Gea let the ball through him (some things don’t change).

4) Manchester United 1-0 Leicester
Caglar Soyuncu steps across Rashford who jumps and rolls as he falls to the ground.

Significance: Rashford scored from the spot – the only goal of the game.

5. Partizan 0-1 Manchester United
Brandon Williams gets his toe to the ball in front of a far slower defender tracking him into the box, who hacks him down.

Significance: Martial converted – the only goal in a game Partizan dominated.

6) Norwich 1-3 Manchester United
Daniel James barges into Ben Godfrey and they both fall over. The referee waves it away but VAR intervenes and awards the penalty.

F365 verdict: Not a penalty; certainly not a clear and obvious error.

7) Norwich 1-3 Manchester United
Fred’s shot was blocked by Todd Cantwell’s elbow on the edge of the box as VAR awarded the penalty.

F365 verdict: Maybe not before VAR, but Cantwell turned his back, which should be an automatic penalty anyway. Take it in the mush, son.

Significance: Norwich were already two down, but that didn’t stop Krul punching the air in celebration as he saved another, this time from Martial. If only United had a reliable penalty-taker.

8. Chelsea 1-2 Manchester United
James runs into the box, attempts to lean on Marcos Alonso – who isn’t there to be leaned on – and falls over.

Significance: Michy Batshuayi equalised with a stunner (wait, when was this?) before Rashford scored his second with a free-kick fired into the top corner from miles out. United through because of it.

9) Manchester United 2-1 Tottenham
Rashford was causing Spurs all sorts of problems in this game, scoring the opener and hitting the bar before he was brought down by Moussa Sissoko to be awarded the penalty.

F365 verdict: I say ‘brought down’ but he barely touched him. Not a penalty.

Significance: Rashford rolled it in and United deserved to win, but wouldn’t have done.

10) Manchester City 1-2 Manchester United
Rashford was flying at this point in the season and as he jinked between four City defenders, Bernardo Silva stuck his leg in where it wasn’t needed to send him sprawling.

Significance: United went two up soon after Rashford’s penalty and deservedly held on for the win.

11) Manchester United 4-0 AZ Alkmaar
It was another hands-in-the-air affair as Mason Greenwood was levelled in the box in front of the Stretford end.

Significance: United were already two up before Juan Mata’s spot-kick.

12) Manchester United 4-0 Norwich
Norwich’s penalty-saving hero isn’t quite as good at coming off his line; he was never going to get to the ball before Williams who poked it past him before the minimal contact.

Significance: Rashford scored his second to open the floodgates for United.

13) Tranmere 0-6 Manchester United
The ball fell kindly for Werder Bremen-bound Tahith Chong, who touched it past the Tranmere goalkeeper, who forgot he could use his hands.

14) Manchester United 3-0 Watford
Ben Foster was too slow as he floored Bruno Fernandes as he knocked the ball past him.

Significance: The first chance for United fans to see the Fernandes penalty hop as he scored their opener and his first goal for the Red Devils. Penalties obviously don’t really count, mind…

Significance: Fernandes gambolled up and scored United’s opener. The one-way traffic before the goal continued throughout.

16) Tottenham 1-1 Manchester United
Pogba absolutely diddled Eric Dier on the right before cutting into the box and being shoved over.

F365 verdict: A Gary Neville ‘oooohhh’ isn’t necessarily tantamount to a deserved penalty, but it was on this occasion.

Significance: No skip this time, but the same result as Fernandes equalised for United.

17) Manchester United 5-2 Bournemouth
Adam Smith may have considered himself unlucky as the ball bounced up to strike his hand, but he was flapping unnecessarily.

Signifiance: Fernandes unselfishly offered Rashford the chance to score his first goal since the restart and he gave United the lead.

18)Aston Villa 0-3 Manchester United
Fernandes treads on Ezri Konsa, who is left with stud marks on his ankle.

🗣”It was a penalty, I don’t provoke the contact”

Bruno Fernandes on if he was fortunate for his penalty against Aston Villa pic.twitter.com/lMaTdGJfNZ

19) Manchester United 1-3 Chelsea
Callum Hudson-Odoi, desperate to make an impact from the bench, did just that as he unceremoniously kicked Martial to the ground.

20) Leicester 0-2 Manchester United
Jonny Evans was waving his arms in despair as he got a touch on the ball as Martial went down.

F365 verdict: He may have got a touch, but double-team partner Wes Morgan certainly didn’t. Penalty.

Significance: Fernandes settled United’s jittery nerves as they secured third place and a Champions League finish. The most significant of them all.

21) Manchester United 1-0 Copenhagen (AET)
Martial was manhandled as he tried to turn and collapsed as he lost all the strength in his poor little legs.

F365 verdict: A dive but also a penalty. Don’t you just hate that?

Significance: Fernandes tricked the keeper by neglecting the skip to smash in the winning goal in extra-time to secure a semi-final place.

22) Sevilla 2-1 Manchester United
Martial’s stunning scoop-pass found Rashford dashing into the box, who got his shot away but got studs in his shin for his trouble.

F365 verdict: A paradox in that it’s both definitely a penalty and yet never given as one. Complaints had it not been given would have fallen on deaf that’s-the-way-it-is ears.

Significance: Insignificant as it turned out. Wasteful and neglectful, United crumbled to their third semi-final defeat of the season.

So, United were – without question – awarded five of their 22 penalties unjustly this season. And before you ask, there were no instances when United should have been awarded a penalty, but weren’t – those were all correct decisions. We checked.