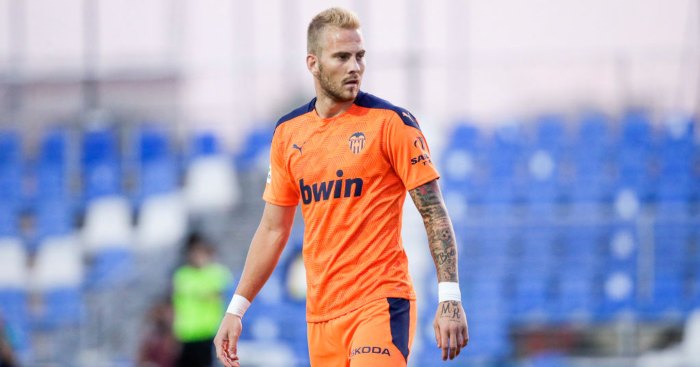 Premier League side Man Utd are ‘weighing up’ making a bid for Valencia midfielder Uros Racic, according to reports.

Racic spent last season on loan at Famalicao in Portugal, making 33 appearances in all competitions and contributing three goals and an assist

The 22-year-old came off the bench as Valencia beat Levante 4-2 in their La Liga opener on Sunday to make his debut for the first team.

The Sun claims that Man Utd are considering a bid for the ‘new Nemanja Matic’ who has a £92m release clause in his contract.

The report adds that £28m ‘might be enough to secure Racic’s services’ after the Serbian under-21 international has failed to settle at Valencia since his transfer from Red Star Belgrade in 2018.

The Red Devils reportedly see Racic as a ‘reasonably-priced long-term replacement’ if Paul Pogba leaves Old Trafford, with the Frenchman said to be Racic’s idol.

On how he sees the Man Utd midfield lining up this season with Pogba, Rio Ferdinand recently told BBC Radio Five Live: “Well that is the big question, I think.

“Listen, if you say you’re going to play your best players in that midfield and you’re going to play three, then you’d say Paul Pogba playing in the holding role and Fernandes and Van de Beek being the guys that are playing around that, a bit more free and able to move around and create.

“Is that Paul Pogba’s best position? I would argue not. But you have to look at what Ole Gunnar Solskjaer wants to do. Does he want his best players on the pitch or is he talking about players fitting in a system?

“I think that’s the intriguing part for me going into the season from Man United’s perspective in terms of the signing that they made, that player.

“Is he just going to be named as one of the best players in the team and he’s going to play, or are we going to say we want the system for the players to fit into.

“It’ a big call and that remains to be seen, but I still think Manchester United will have some sort of movement and there will be additions in this squad going into the season, if not the first week the second or third.”