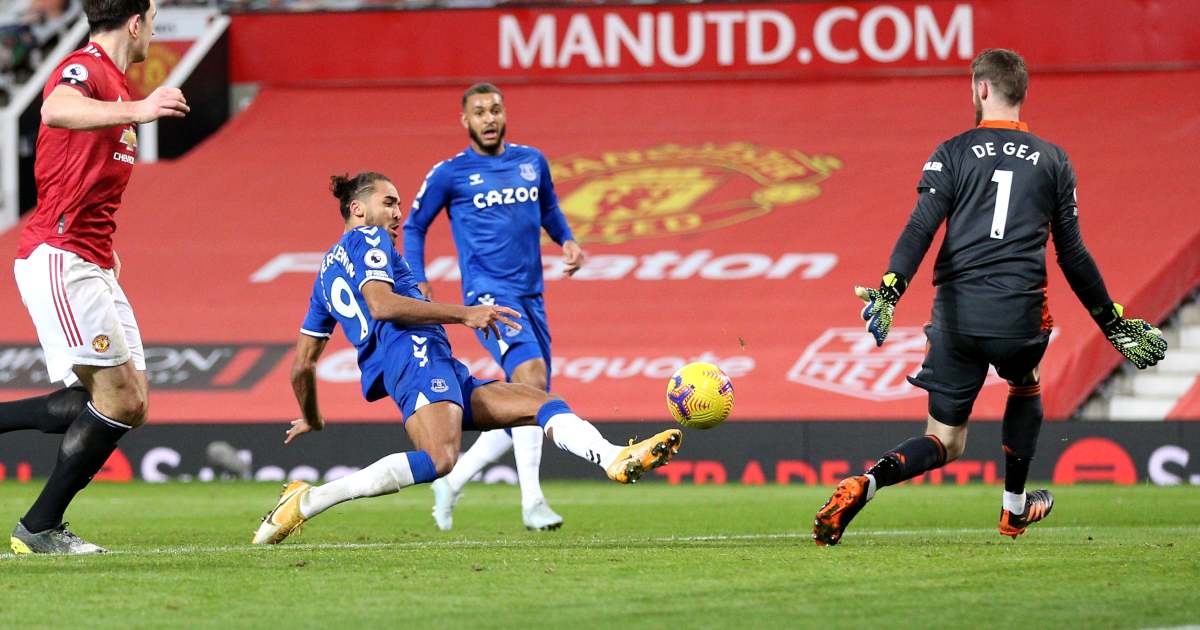 Just days on from the 9-0 annihilation on nine-man Southampton, the Red Devils looked set to celebrate another Old Trafford victory.

Scott McTominay had set Ole Gunnar Solskjaer’s side on course for victory, having recovered from Abdoulaye Doucoure and James Rodriguez cancelling out first-half efforts from Edinson Cavani and Bruno Fernandes.

But United’s soft underbelly from set-pieces was exposed in stoppage time, with Lucas Digne’s free-kick flicked on by Michael Keane and Calvert-Lewin directing home for Everton.

The hosts will be wondering how they conspired to throw away victory here, especially having gone into half-time two goals up thanks to Cavani’s fine header and Fernandes’ moment of magic.

Everton were level within seven minutes of the second half getting under way as Doucoure turned home before Rodriguez rifled home the leveller, only for McTominay to head home Luke Shaw’s free-kick.

Yet in stoppage time, Calvert-Lewin was there to pounce, sealing a memorable point at an empty Old Trafford.

It was a remarkable end to a night that started with both sides paying their respects on the 63rd anniversary of the Munich air disaster.

The hosts, buoyed by the win against Saints, started the brighter on Saturday evening, with Mason Greenwood whipping in a superb left-footed cross that Mason Holgate put behind after it just evaded Cavani.

Paul Pogba’s header from the resulting corner was hacked clear and Greenwood was soon causing problems again, turning Andre Gomes inside out before hitting a mishit shot across the face of goal.

It took 24 minutes for either side to muster a shot on target but Cavani made it count.

Marcus Rashford fizzed a lovely cross to the far post and the veteran put a firm header past Robin Olsen, having got behind Keane.

2 – This was just the second time in Premier League history Manchester United led a home game by 2+ goals at half-time and failed to win, following a 2-2 draw against West Brom in October 2010. Drama. #MUNEVE pic.twitter.com/9myHH5C6Sh

Cavani mishit a shot when found by an Aaron Wan-Bissaka cross soon after and Fernandes had an effort blocked, before in-form Pogba was forced off.

The France international, who was named United’s Player of the Month for January, pulled up with what looked to be an issue with his right thigh, leading Fred to replace him in the 39th minute.

Victor Lindelof was breathing a sigh of relief after his clearance under pressure was blocked and Richarlison subsequently sent an effort across out-of-position De Gea’s goal, before Fred missed as the first half looked set to peter out.

But Fernandes had other ideas. Without options on the edge of the box, he struck a sublime right-footed shot that beat Olsen and nestled in the top left-hand corner.

It was a stunning strike that Calvert-Lewin wasted the chance to take the edge off in stoppage time when striking narrowly wide.

But while Everton may have ended the first half with their shoulders slumped, they had their tails up after the break.

Shortly after a Shaw snapshot was denied by Olsen, Calvert-Lewin was sent through and De Gea could only parry his shot into the path of Doucoure.

That 49th minute blow was soon followed by another gut punch. United’s defence failed to effectively clear a cross and Doucoure drove a ball back to Rodriguez, who took a touch and fired a low left-footed strike past De Gea.

Solskjaer’s side were rocked on their heels but slowly began to regain their composure and build pressure, with Rashford forcing Olsen into a save at his near post.

United edged back ahead in the 70th minute. Shaw sent in a fizzing free-kick from the left and McTominay directed it past Olsen.

Fernandes and Rashford tried to extend United’s lead and avoid a nervy ending, with Lucas Digne hitting the foot of the post before Richarlison fired off target at the other end.

They were warning shots that United failed to heed. Deep in stoppage time, Digne’s free-kick was flicked on by Keane and Calvert-Lewin pounced from close range.