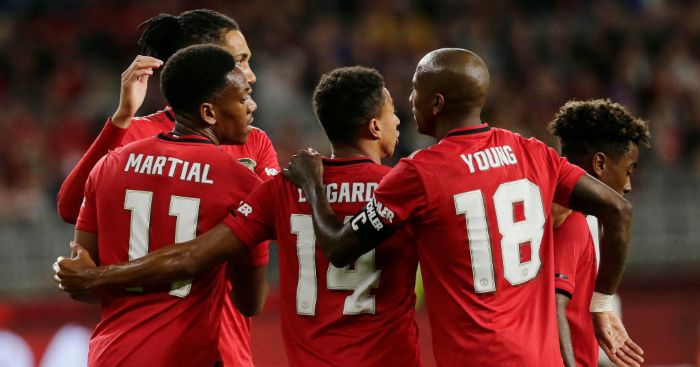 Mason Greenwood and Marcus Rashford put Manchester United on course for a comprehensive pre-season win against Leeds in Australia.

Just 37 miles separate Old Trafford and Elland Road, but it was Perth’s mammoth Optus Stadium that played host to these sides’ first meeting since September 2011.

A fine move involving the impressive Paul Pogba and new boy Aaron Wan-Bissaka led to 17-year-old Greenwood’s first senior goal, with Rashford doubling that advantage with a fine strike after a dizzying turn.

Rashford and Daniel James – so nearly a Leeds player in January – hit the post in the first half and United continued in the ascendancy after the break, with Phil Jones heading home before Anthony Martial slotted home a spot-kick in front of 55,274 fans.

Today's #MUFC Man of the Match, as voted by the fans…

The atmosphere and competitiveness was unlike most friendlies, which United follow by heading to Singapore to face Inter Milan – the side attempting to sign striker Romelu Lukaku.

The 26-year-old was again conspicuous by his absence after picking up a new knock on the eve of the game, but the striker was not missed in Perth.

Bielsa, who took his place on his trusty blue bucket after arriving Down Under on Tuesday, saw his side overawed for the most part, with Rashford hitting the woodwork inside two minutes.

Pogba bossed the midfield in the first half and had several attempts to score, while Sergio Romero – in for the ill David De Gea – somehow kept out Patrick Bamford with his feet in a positive period for Leeds.

That spell jolted Man United into life. Greenwood went close before Scott McTominay surged forward and fed Rashford, whose stunning drop of the shoulder left Gaetano Berardi on the deck and was followed up by a cool 28th-minute finish.

James hit the post after Rashford and Pogba linked up well, with Solskjaer’s side continuing strongly despite 11 half-time changes.

Andreas Pereira saw a shot from distance tipped over but Jones scored from the resulting corner after losing Kalvin Phillips to head home in the 51st minute.

Angel Gomes had an attempt as the match became a little stop-start, with the Leeds fans in fine voice despite seeing their side fall further behind.