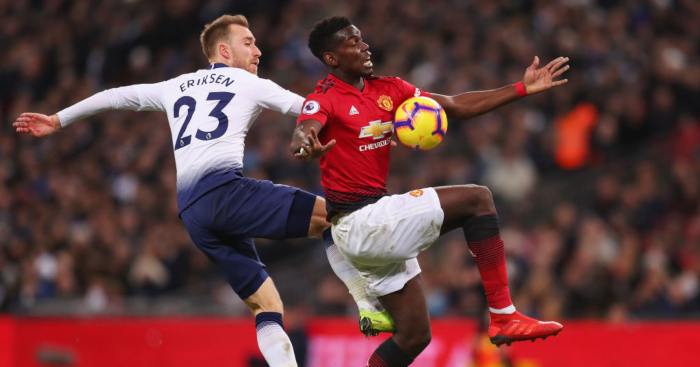 Manchester United may consider a bid for Tottenham midfielder Christian Eriksen this summer if they sell Paul Pogba, according to reports.

The Daily Mail said on Thursday that United’s board are prepared to ‘stand firm and rebuff approaches’ for the 26-year-old this summer.

With the report adding at the time that United ‘doubt whether Juventus have the money available to finalise a deal’ for the midfielder.

However, The Sun reckons that Real Madrid ‘met with United officials last week’ over Pogba when they came over to England to wrap up the deal for Eden Hazard with Chelsea.

And with Pogba’s possible exit looming large over Old Trafford, the Evening Standard claims that United ‘have begun drawing up a list of potential replacements’.

Ed Woodward ‘remains confident the player will be part of Ole Gunnar Solskjaer’s revolution’ but United’s executive vice-chairman is also preparing a shortlist just in case Real manage to lure Pogba away from Old Trafford.

Eriksen told Ekstra Bladet on Wednesday that an exit from Tottenham is likely this summer as he “would like to try something new”.

The Evening Standard continued by saying that Eriksen is ‘seen as a top class replacement’ by United with Youri Tielemans also ‘sounded out’ after his spell at Leicester last season.