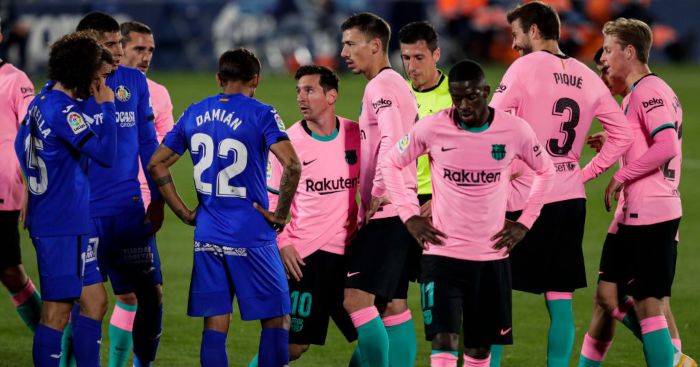 Man Utd had everything tied up to bring Ousmane Dembele to Old Trafford before the Barcelona attacker decided against the move, according to reports.

Dembele was linked with a move to Old Trafford as an alternative for Dortmund’s Jadon Sancho. Rumours intensified on deadline day as Dembele missed training with his teammates.

But neither transfer materialised after Dembele decided he wanted to remain in Spain and Dortmund rejected all offers for Sancho.

Previous reports have claimed that Barcelona have been angered by Dembele’s actions as they wanted to sell him to make up transfer funds.

Barca officials aimed to sell the Frenchman to free up money for their pursuit of Lyon’s Memphis Depay.

However, Dembele apparently refused to leave the club as he aims to force his way back into the first team.

And now France Football (via Sport Witness) say that Man Utd and Barca ‘agreed’ a deal for Dembele just 48 hours before the window closed.

They say if the deal had gone through then Depay could’ve moved to the Camp Nou and Islam Slimani would then have swapped Leicester City for Lyon.

At 6pm on transfer deadline day ‘pre-filled documents were sent to  the various players to be transferred to their respective future clubs’ but that’s when it all went wrong.

France Football claim ‘the axe fell’ at 8pm on deadline day as Dembele refused to move and all three moves fell apart.

Barcelona boss Ronald Koeman was ‘upset’ at the outcome and warned Dembele that he should prepare himself for a ‘tough’ campaign.