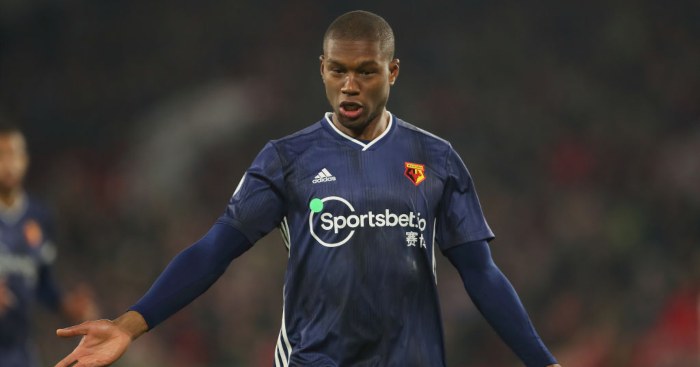 Manchester United and Arsenal are eyeing up a potential move for Watford defender Christian Kabasele, according to reports.

The Red Devils and the Gunners are looking to strengthen their squads in the January transfer window with Arsenal in particular understood to be keen on bringing in a defender.

Kabasele, who has been sent off twice this term, has started 13 of Watford‘s 22 Premier League matches this season after missing a number of matches through suspension.

The Hornets brought the Belgium international to Vicarage Road in 2016 from Genk for a reported fee of £5.8m and Kabasele has been one of their best players ever since.

And Le10Sport claim Manchester United and Arsenal are two of four Premier League outfits in for the 28-year-old.

West Ham and Newcastle United are the other two clubs ‘interested in his profile’ with all four teams ‘closely monitoring his situation in this winter transfer window’.

The article in the French outlet claim that ‘contacts are even already underway’ with clubs queuing up for the centre-back.