Home Mailbox Man Utd and Liverpool spoiling VAR for everyone else… 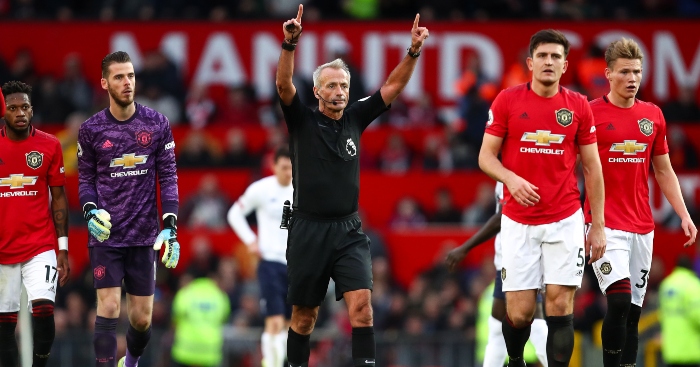 Keep your mails coming to theeditor@football365.com. And your votes too…

Cricket is the answer
Whilst I tend to use this motto as a life rule (what can’t you solve by sitting in the sun with beer for 6 hours?), I can’t help but think it offers a solution for the current furore about the close decisions of VAR in offsides.

Consider this, in cricket if the LBW is within half a ball’s width of hitting the stumps, the umpires call stands even if he said it wasn’t. Even though they can show that the ball would’ve hit the stumps, the on field decision stands in order to preserve the authority of the umpires decision.

Let’s move this to offside decisions. The ball is played through, a goal is scored, the review takes place. Each linesman is issued with a flag with a button on it, if the linesman thinks it’s very marginal, he keeps his flag down but presses a button to show he believes its offside, but the game continues and players don’t stop (pet hate but we shall move on). If its miles offside, he puts his flag up as you would expect the official to do currently. Under this system of button pressing, the following four scenarios occur:

1. The review takes place, the player is onside by more than the width of half a football (or a whole ball, point is the same, just a different margin), the linesman’s offside decision is overruled. The goal stands.

2. The review takes place, the player is onside by half a ball, the goal is disallowed. It is within the onfield margin and thus, the linesman’s decision stands

3. The review takes place, the player is offside by within a ball’s width, the onfield decision of offside stands.

4. The review takes place, the player is offside by more than the ball and the goal is disallowed.

All goals are checked so the same system would work when the linesman doesn’t press his button or raise his flag when it’s obvious. No flag, ball becomes a positive margin, offside by within a football, no flag, so a goal is given, offside by more than a ball and the goal is immediately ruled out.

This stops the silliness of his “toe was offside”, or “but when did the ball leave his foot?”, it provides a clear margin which is understandable even for that bloke in the pub and prioritises the importance of onfield decisions.

I think this would be a big common sense win but for that reason alone it couldn’t be implemented in the premier league I suppose… Be interesting to hear peoples thoughts.

Oh and finally, for god sake show the VAR decisions in the stadiums! Just because United and Liverpool can’t be arsed to put up screens doesn’t mean everyone else should suffer.
Charles, depressed Arsenal fan trying to find something else to think about

Ulterior motive
Are the delays in coming to a VAR decision deliberate and just softening us up for a quick advert break?
Roger, THFC

Sounds of VAR
Mikey CFC and Sparky LFC have been spot in with comedy noises for VAR and diving. Could there also be a noise for turned down penalty appeals? I am thinking the Family Fortunes Wrong Answer buzzer ‘Uh Uh’ noise. Have a nice weekend!
David lfc

Cheerier about Spurs
The most likely time for me to write in is when something irritates me, but I’m too old to mix it with the younger generation of keyboard warriors, who go from elation to hot anger with their team over the course of a weekend. But on a gloomy November morning, the article by Seb Stafford Bloor really cheered me up.

The atmosphere at White Hart Lane, artificially lifted by the return home, has been flat most of this year. There have been no real grumbles about Poch, just a frustration with the performances from players who had previously elevated expectations. But that article articulated a lot of things that have been in my mind, and suddenly the expectation of a dour struggle against a newly promoted team tomorrow feels more like an enticing prospect. I’m still not entirely sure we’ll win, but I now have a broader perspective on the match, because from what I have seen Sheffield United are no mugs.

It would doubly please me if the guy who sits in the row behind me has read the article also, because then he may lighten up on the expletives he showers on Eriksen and Rose at the slightest opportunity. Eriksen as pointed out is a player who does things that thrill you, when they come off. Sadly this season the success ratio has been way down, and every misplaced pass is greeted with an unbelievable volley of bad language, to the extent I often wish Eriksen wasn’t on the pitch, and when he is, he just takes the safe option.

It was a good win on Wednesday, on top of a fairly decent performance at Everton, but as I’m sure at least one pundit must have said ‘Lads, it’s Partizan’
Jim French (Spurs since ’59) Herts

Wake me up in March
Couldn’t agree more with Howard Jones on the group stages of European competition.

This ‘phony war’ has been going on for years and it bores the hell out of me – meaningless match after meaningless match – players getting injured leading to a dilution of Premier League matches for teams having to balance the demands of two games a week.

I’ve called for this before but I really don’t see why knockout football can’t be restored. It would be better for the wellbeing of the players as they would play fewer matches. Every match would matter meaning attendances would rise. And you would also have the potential of an early cup upset.

Given the positioning of our game against Vitoria this week, UEFA don’t seem to care about the group stages either.

I can’t be the only one that only tunes into the Champions League in the Spring.
Graham Simons, Gooner, Norf London

…This has been discussed before, but as a response to Howard Jones in this morning’s mailbox: the lack of mailbox entries discussing the Champions League and Europa League games this week does not illustrate that “people just don’t care”.

Around the rest of Europe, there is a great deal of interest in the group stages, because their clubs aren’t necessarily shoe-ins to qualify. And as ridiculous and unfair as third place CL teams dropping into the EL after the group stages, this does provide additional interest and drama. At a glance it looks like there is a fight for third place in four of eight CL groups, which gives Zenit, Leverkusen, Benfica, Lokomotiv, Brugge and Galatasaray something to compete for.

Around the world, meanwhile, there seems to be more of an interest in the CL games the big teams play, despite the lack of qualification jeopardy. They seem to just enjoy watching the football (crazy, right?)

I totally understand the British view that the CL group stages aren’t interesting enough to watch, I feel the same way – but it’s better to avoid projecting your own feelings onto football fans across Europe and the rest of the world.
Oliver Dziggel, Geneva Switzerland

Nketiah for England
So graham in this mornings mailbox thinks England should call up Nketiah to the squad……..what flavour crack is he smoking!! He may have talent but let’s not get away from the fact that he has scored 3 goals for Leeds in the championship and can’t dislodge Patrick can’t hit a barndoor Bamford from the starting 11…………..please!!
Paul, Manchester

…Sure I won’t be the first to mention it but Graham Simons has missed the recent injury to Eddie Nketiah that is keeping him out of action for the next few weeks. Not sure he was banging on Gareth Southgate’s door quite yet but it was a big shame as he was due to finally start for Leeds at the weekend ahead of Patrick Bamford (0 goals in his last 10 games – he must have something really incriminating on Bielsa) .
Eddie is a natural finisher and if he gets enough gametime, he may propel us to promotion much like Tammy Abraham did for Villa last season.
Rick Sherman, LUFC (18 years since Dom Matteo scored a goal in the San Siro)

St Michael
Just wanted to send a short message to say a big thank you to Michael O’Neill for his great job as Northern Ireland manager. He has created a great team ethic, and considering the limited resources available, we’ve massively overperformed. The win against Ukraine in the Lyon deluge will live long in the memory of every member of the GAWA that was there.

Hopefully he will have more than 2 further games in charge though….!
Paul

North of the border
A little while back J Nic wrote an article criticising the snobbery towards Scottish football and subsequently was pretty much slaughtered in The Mailbox.

I just thought I would point out that yesterday Celtic beat Lazio 2 – 1 away in Rome and Rangers beat Porto 2 – 0 at home in Glasgow.

Scottish football isn’t suddenly amazing, I am not saying that. But perhaps those slaughtering J Nic were a bit too knee jerk?
Naz, Gooners.

Defending Lawro
Today’s Mediawatch mentions that Lawro hasn’t predicted a Liverpool defeat in 125 games. Maybe because Lawro is no longer annoying me on-screen weekly and his absence is making my heart go fonder, maybe there’s some inner need for me to defend a senile old man, or maybe that second bottle of wine last night has put me in a mood to avoid all work today, but either way, I thought I’d look into this a little deeper.

If my hungover maths is right, it would make the game against United in Jan 2017 the last time he predicted they’d lose. Since then, in that season they lost to Swansea, Hull, Leicester and Palace. I don’t think anyone would have predicted loses in the first two, and given Liverpool beat Leicester 4-1 at home and Palace 4-2 away earlier in the year, I don’t think it was a massive leap to predict they’d not lose the reverse fixtures.

The following season their first two loses came against City and Spurs. Ok, I’ll give you them, these could very realistically be predicted as loses. Next came Swansea again. Even with them being a banana skin the previous season, they beat them 5-0 about a month previous, so I don’t think Lawro was alone in predicting a win/draw here either. Next was United, who Mourinho guided to 2nd that year. I’ll give you this one as well as they didn’t manage to beat them at home. Same with the next defeat against Chelsea. Since the start of last season, as we all know, there was only one defeat against City, which many would have predicated as a defeat.

So that’s 124 games, and he only really got it “wrong” five times compared with non-“upset” results. That doesn’t even factor in the argument that in some of those five fixtures there was no reason to believe that Liverpool couldn’t have take a point from it.

Five from 124 (4.03%) or potentially six from 125 (4.8%) is definitely not out of line with what a lot of people would have predicted the way Klopp has got his team playing. Is this really Mediawatch worthy?
Big D, Luxembourg