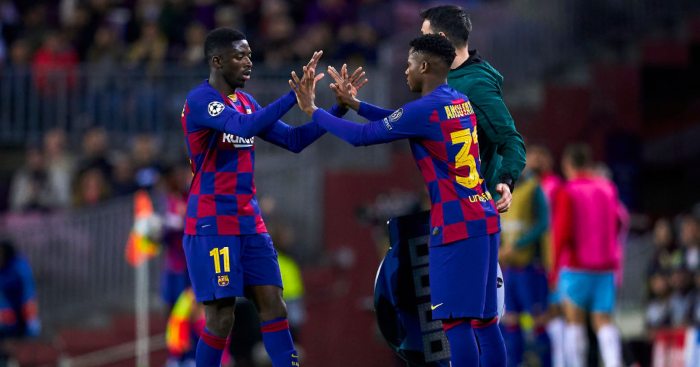 ESPN reported a week ago that the Red Devils have turned to Barcelona’s Dembele as a possible alternative to Jadon Sancho with ‘informal talks’ taking place between Man Utd and the Catalan giants over the winger.

While Fati emerged as a legitimate target for Man Utd in June after reports had claimed he was the subject of a ‘huge £89m offer’.

However, in a lengthy interview with Barcelona TV, Bartomeu ruled out a number of transfers out of the club this summer, including the two reported Man Utd targets and Lionel Messi.

Bartomeu said: “Messi is untouchable & non-transferable. He knows it, we all know it.

“But there are various non-transferable players like (Marc Andre) Ter Stegen, (Clement) Lenglet, (Nelson) Semedo, (Frenkie) De Jong, (Antoine) Griezmann, (Ousmane) Dembele… players we are counting on in the future.”

Bartomeu added: “We have had (offers) for Ansu Fati, for example.

“But Barca does not want to sell players, although we receive several offers for players.

“We don’t want to sell him. He has a great future. I’m telling you from here, he’s non-transferable.”

On whether Philippe Coutinho – who has been linked to Arsenal – has a future at Barca, Bartomeu continued: “The head coach will make the decision. If he wants him to continue, next year he will play with us.”

Manchester City, meanwhile, are ‘on pole’ Messi after reports claimed he faced an uncertain future at the Camp Nou – but Bartomeu also dismissed that notion.

He went on: “I have spoken with Koeman and the pillar of our project is Messi. He has a contract until 2021, I speak a lot with Leo and more regularly with his father.

“He is number one in the world. There is no doubt that in Koeman’s new project you can count on Messi.”