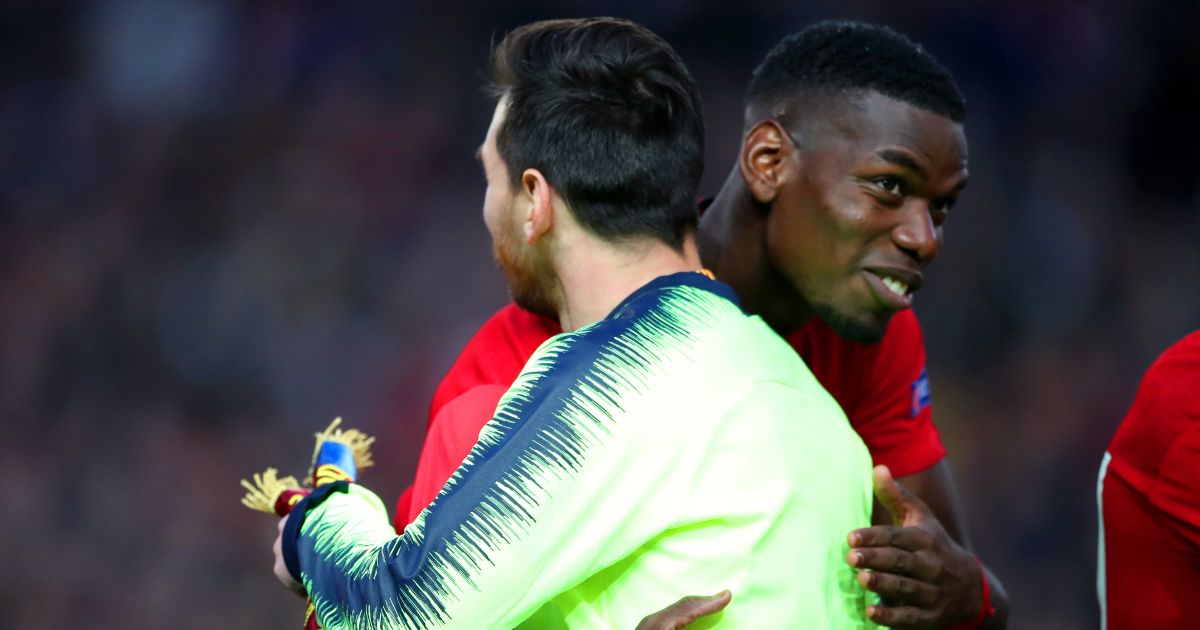 Send your thoughts on Man Utd, Pogba and more to theeditor@football365.com…

Man Utd could end up like Barca if they keep Pogba
My take on Pogba is that he is clearly a quality player, who has many “world class” attributes but plenty of issues in his game that, at this point, he’s not going to fix while at United.

Over an 8 game International tournament, maybe he’ll stay disciplined enough to make a serious contribution to winning it, or he’ll make the stupid error that gets you knocked out in the quarters. Over a full season, he’ll go missing for long stretches and, even when playing well, give away a penalty every time he tracks back (which won’t be that often).

If money was no object, I’d probably keep him at United as, in the right game, he could be a real difference maker.

But it’s clear that if he was to stay, its only going to be on a crazy deal that, for many reasons (not all his fault), he hasn’t earned. It reeks of the Sanchez contract, or the de Gea contract that looks a bigger mistake with each passing season. United need to stop dishing out giant overvalued contracts or they’ll wind up in a financial mire like Barcelona, only without a Lionel Messi to show for it…

If they could get £45m from PSG, United should get rid.
Andy (MUFC)

Jules Kounde
After reading Will Ford’s article on the Erling Haaland vs Jules Kounde debate this morning, now it is not often i disagree with the great man as he is a top friend of mine and i have had him on my podcast a fair bit because of his knowledge and passion, however as much as i understand his point of view on this i do tend to lean on the side of the “Jules Kounde is a smart piece of business”

1. Jules Kounde could become one of those generational talents, a world class CB, getting in early before his price sky rockets if he has an even better 2021/22 campaign.
2. Thiago Silva is unlikely to be at Chelsea beyond this coming season, Antonio Rudiger has one year remaining and may not sign, Kurt Zouma has never looked solid when in defence for us, that is straight up three CBs that will need replacing next season.
3. Marc Guehi has never played in the Premier League or at a level above the Championship, the fee was to good to turn down and for every Reece James and Mason Mount who made the step up there are many names who sadly do not.
4. FIkayo Tomoi is one of those out of Tuchel’s control, the deal from day one had that option to buy, Milan used it, it is what it is there.

When it comes to Erling Haaland i am almost convinced now that Dortmund see the value of qualifying for Champions League will be much easier with Haaland than without, meaning the risk of losing him for his release clause (which is still a lot of cash) next season is worth it in the long term vs the short term.

Overall signing a defender was a priority due to the reasons i have said above, if it does go through i will be one content Chelsea fan, but we still need to make an addition in midfield as well as a forward, but it is not going to be Haaland or Lukaku, no point wasting time on those deals when we all know they will not go through this summer.
Mikey, CFC

Conor Coady to be phased out at Wolves…
Enioyed the Awkward piece this morning, although I have a sneaking suspicion that the regular who will, or at least should, be phased out at Wolves in my opinion is Conor Coady. Now I understand that he is a “great talker”, a “strong presence in the dressing room” and has “excellent leadership qualities”, but I’m pretty sure Napoleon would have offered all of those things to the Wolves team, but I wouldn’t want him playing centre back (too short for a start). Coady is a highlights reel defender, last ditch tackles, slow motion pictures of him shouting and pointing, not to mention the classic ‘pointing to his head’ a lot. But, last season he was horribly exposed by Willy, Boly’s Covid related absence and has proved he is limited to playing in a back three as the spare man with two strong defenders in front of him. His famous Stevie Me-esque cross field balls it turns out relied on Doherty and Jonny’s excellent forward runs, so he lost that string to his bow as well.

In short, he’s been made to look a lot better than he is by better players around him, when he was required to step in those players absence, he was very poor and should be sent packing with thanks for the Championship season. As for being part of Gareth’s ‘leadership group’ I think that says an awful lot about several things, but not Conor Coady’s football ability.
John Collins, Shropshire

Phil Jones
I’ve just finished reading the Phil Jones article about where next and the comments and felt I had to speak up.

As someone who has played football all my life to a relatively good level, I can see how good a player he really can be. He’s quick, aggressive, powerful and technically quite adept.

The guy has had some absolutely awful luck with injuries throughout his career and because of this he’s never really got a good run of games under his belt in the last few years.

In his early years with us, he looked phenomenal at times, driving from midfield and defence and definitely looked like he could be a world class player, but then injuries started and he has struggled ever since.

I have no doubt at all that if he can get a regular run in a team, he could once again find that form and prove so many people wrong (the faces are hilarious though).

For anyone who has ever had consistent injuries, you will know how hard it is to get back to your best straight away and as much as you try there is some serious rustiness, which in turn causes mistakes.

So next time you think about taking the piss out of him for being a liability try putting yourself in his shoes and realising just how hard it must be for him.
Joe

Ooo-aahh
Watching those silly pre-season goals reminded me of something that I’ve always kinda enjoyed.

We all know, more or less, what a football crowd sounds like (even if our memory might have gotten worse over the last couple of years). The grumbles, the roars, the false starts. But I’ve always loved the particular pattern you get after a wonder goal.

Because there’s always a momentary surprised sound just before the roar, like tens of thousands of people, all taking a breath together, and going “what’s he up to there”. In my head it’s this short ‘ooo’ that transforms into a full-throated AAAAAAHHH.

It doesn’t happen the same way with more normal goals; they’re expected. The anticipation is louder, more fervent. The celebratory roar starting before the ball hits the net. Whereas the wonder goal just catches everyone by surprise.

Plus, for added benefit, it also gives you the ooo-awww, for when that moment of madness almost comes off, and a stadium cheerfully mourns what might have been.
Andrew M, Devon

My response to Andy MUFC
First I’ll start with his final statement that it is not newsworthy, hence why today the independent (national newspaper) wrote an article on it. My opinion on this is not whether the surgery would be a success as I would hazard a guess that Utd would use the best surgeons in the world to insure their prized asset was in perfect condition. What you didn’t gather is the double standards in the media. For example TAA a younger  player than Rashford has played his entire career to a very high standard, had a handful of games that were not up to his usual high standard and he was ripped apart by the media, calling for him to be dropped from the England squad etc. There is a clear double standard when Rashford performed worse than Trent last season and walked onto the England squad “injured”, in a position England where well stocked and not a word said. Is it because the bull swallowing Utd fans would of probably rioted because they didn’t get their way again? Quite possibly. Is it because of his social media presence? Also quite possible. But it wasn’t based on football. There is a utd bias in the English media and pressure exerted without remorse on everyone else. This is elite level football where the players should expect this to happen when they play poorly as it’s happened since football began. But if the media and Utd fans want to continue down this fake narrative to spare poor Rashfords blushes then knock yourselves out.
JB

YouTube football
I was just reading about The Future of Football Cup, a tournament trialling five new rules of football. Short story is each half is 30 minutes long, timed from 30:00 minutes until 0.00, with the clock stopping on every stoppage.

Kick-ins instead of throw-ins, sin bins for naughty players and I’m guessing a few other things thrown in, hopefully one which negates any limb being offside (and offside being judged purely on a centre of gravity algorithm – I just made that one up. I’ll name this ‘Offgrav’).

So here’s my problem. The clock stops after every stoppage. So that’s a micro 10 second YouTube ad opportunity right there. And if you’re watching something like the Copa America, well, that’s a shed tonne of stoppages and a huge window of ad hungry execs just salivating to cram these annoying adverts into the beautiful game.

Keep the sin bin I say (the Chiellini jersey pull for example on Saka is a good example where a sin bin would be a good idea). You can have my Offgrav rule for free, but as for stopping the clock, no. Absolutely NO.

Championship kits…
I enjoyed Ben Stewarts’ Championship kit rankings. However, where he sees a “phoenix rising from the ashes” I just see a t-shirt bra. Anyone else?
Joe D

👀 Say hello to your new home for all things EFL.

📝Quality feature writing from @F366
📹YouTube from the best in the business: @PNEBenHD and @Benjaminbloom
🎙️Brilliant podcasts twice a week from @secondtierpod
🤫Plus a new weekly Championship video show coming soon pic.twitter.com/MOrdyOg6hg

Reperesting
Calvino is my nomination for greatest mailbox contributor. The following sentence from his comment today is just plain genius: “Fast, attacking football, with local youths reperesting the club.” I have no idea what “reperesting” means but it is my new favourite verb. I look forward to confounding my family, friends and workmates when I employ it.
Gregg (looking forward to the next effort)