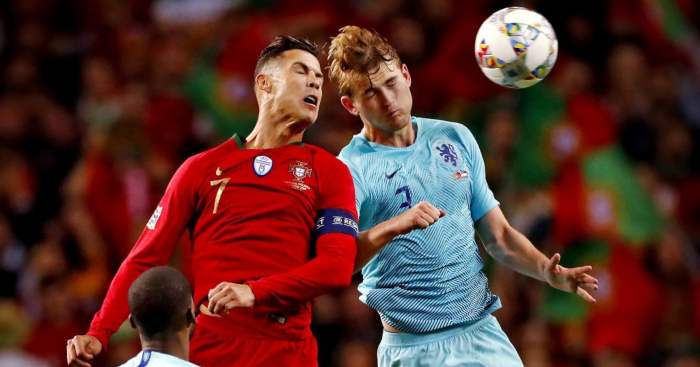 Manchester United have an agreement in place to sign Ajax defender Matthijs De Ligt in case his transfer to Juventus collapses, according to European football expert Julien Laurens.

The 19-year-old defender has emerged as one of European football’s hottest properties this summer amid reports Ajax are prepared to let him leave this summer.

A host of Europe’s top sides had been mentioned as suitors, with Juve, United and Paris Saint-Germain leading the chase for De Ligt.

Reports in Spain have previously suggested that Juventus have won the race to sign De Ligt with Ligue 1 was not deemed competitive enough for the player and United’s lack of Champions League football a big turn off.

However, it’s claimed that Juve are struggling to agree a fee with Ajax for the centre-half, having had an initial €55m offer, with a further €10m made up in bonuses, rejected by the Dutch giants.

But Ajax’s €70m asking price is no issue to both PSG and United, who are, according to a transfer expert, the only two sides to have an agreement in place with the Eredivisie outfit over De Ligt.

Laurens told ESPN FC (via the Daily Express): “I think there’s a chance where Ajax will lose a little bit of patience and say ‘hang on a minute, PSG agreed, Manchester United agreed. In that case we stop talking to you and De Ligt can choose between the clubs that we actually have an agreement in place.’

“It’s not really in Ajax’s interest to waste a bit more time about De Ligt.

“They want the money in, they want for him to go, he was great for them but now he’s decided that he wants to go.

“They want that deal to happen, they won’t want to have to go back and forth in negotiations with Juventus or whoever else.

“So they might well say ‘do you know what, we already have an agreement in place with some clubs, we’re going to only focus on them clubs and De Ligt would have to choose between those clubs because you’re wasting our time.'”