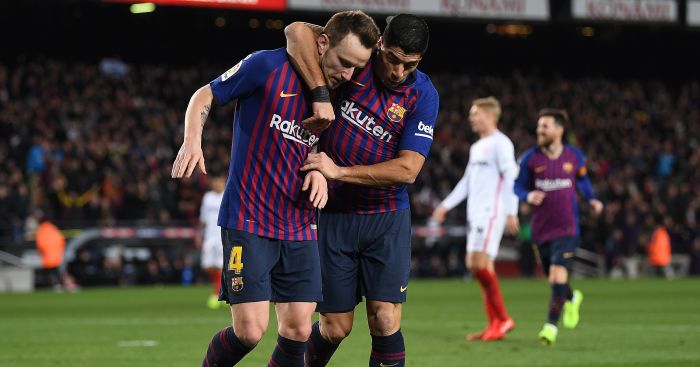 Manchester United and Chelsea are both interested in signing Barcelona midfielder Ivan Rakitic, according to reports.

Rakitic is a key member of Ernesto Valverde’s squad at the Camp Nou with the Croatian starting 30 matches in all competitions already this campaign.

However, Sport Witness brought Sport‘s front page – which reads ‘Stop Rakitic’ – to our attention on Wednesday morning, with the 30-year-old’s future apparently in doubt.

Valverde convinced Rakitic to stay at the club last summer after strong interest from Paris Saint-Germain, and now the Croatia international wants a new and improved deal.

However, the report claims that the Catalan giants have no intention of offering him fresh terms, which Rakitic also demanded in the summer.

Manchester United and Chelsea are among a number of clubs that ‘have asked’ for Rakitic with the possibility that he could be available for a transfer in the summer.

Rakitic, who is valued at around €65million by his club, is reportedly using the interest from those teams to persuade Barca president Josep Maria Bartomeu to give him a new deal.

And if Rakitic fails to get his way then he will ‘consider listening to offers’ to leave at the end of the season, with the report continuing by saying that Frenkie de Jong’s arrival means the loss of Rakitic would not have a huge impact on Barca.