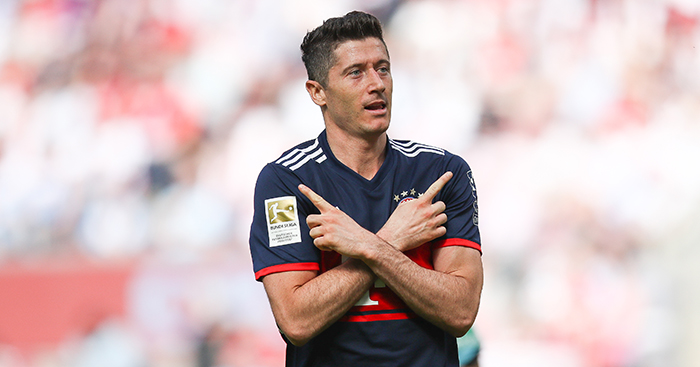 Man Utd and Real Madrid’s hopes of signing Robert Lewandowski this summer have been dealt a blow with Niko Kovac insisting that the striker will be going nowhere.

The Poland hitman is keen on a fresh challenge, with his agent Pini Zahavi confirming a possible exit after four years in Bavaria earlier this summer.

He told Sport Bild: “Robert feels he needs a change and a new challenge in his career. The managers of Bayern know about it.

“Robert’s motives are not money or to join a specific club.”

Lewandowski has been linked with Premier League duo United and Chelsea, with Jose Mourinho thought to be one of the frontrunners to land the player, according to the report in the Daily Express.

It is also rumoured that Real Madrid had identified the 29-year-old as a potential replacement for Cristiano Ronaldo, who left a 40-goal void behind after his surprise switch to Juventus.

It has been claimed that the forward could be an alternative to Eden Hazard and Neymar as Real Madrid look to recruit a big name before the summer transfer window slams shut.

Borussia Dortmund CEO Hans-Joachim Watzke also recently claimed that he would happily spend €100million (£88.8m) on bringing the prolific striker back to the club.

But Bayern chief Kovac insists that Lewandowski is not for sale – even if the attacker wants to leave the Allianz Arena.

Speaking to Sky Sport Germany, Kovac said: “There’s nothing new with Robert, it’s clear that he will not leave this club because we have a top striker and we certainly do not want to relinquish him or give him away.

“We want to achieve a lot with him. He is a great footballer, who has achieved a lot in the Bundesliga, scored many goals and now in the new season certainly will score many goals.”

“It’s true that Robert toys with going elsewhere. Only [he has] one thing he likes, the other is what we like to do.

“Robert has a contract – I do not know how long – and he will certainly stay as long as possible here.”