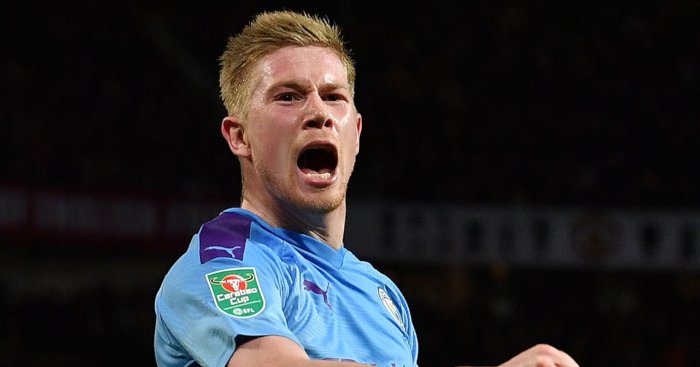 De Bruyne was injured in the closing stages of the Carabao Cup final victory over Aston Villa last weekend and missed City’s FA Cup win at Sheffield Wednesday in midweek.

Guardiola said: “He is getting better. I spoke this morning with the physio and he feels better. It’s not perfect but we will see.”

Guardiola also believes Manchester United are enjoying their best spell of the season.

The Red Devils, who are bidding to complete a league double over City, have gone nine games unbeaten in all competitions.

“From what I saw they follow him (manager Ole Gunnar Solskjaer) absolutely. They’re getting better. Right now is maybe their best moment of the season.”

United’s win at the Etihad in December was marred by crowd trouble, with Brazilian midfielder Fred hit by an object in the closing stages.

“We have to try to behave good as managers and professionals and then as supporters,” Guardiola added.

But Guardiola admits his he relishes the encounters with United.

He said: “It’s so nice. I love it. They’re always special.

“The situation this season is different. We are playing to improve, not to win title. For them it is important. It will affect the Champions League next season.”