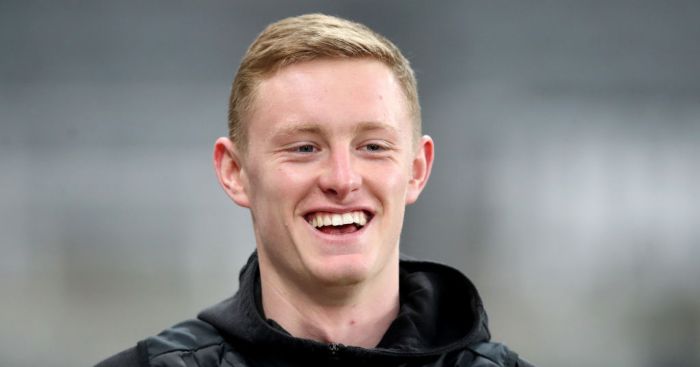 Longstaff has been identified as crucial to Ole Gunnar Solskjaer’s Old Trafford rebuild, which will focus on signing young, homegrown and hungry players.

Danny Mills warned the midfielder off making the move, as if it’s any of his damn business, last month.

But a handful of outlets suggest United will pursue the player along with Aaron Wan-Bissaka and Harry Maguire.

The London Evening Standard describe United as ‘convinced’ that Longstaff wants to join them, with Solskjaer ‘convinced he will develop into a top-class midfielder’.

United scouts ‘believe they have spotted a star of the future,’ and it is thought that an offer of £25m would be enough to persuade Newcastle to part with their academy product.

The Daily Mirror say United are ‘confident’ of signing a player who fits the ‘profile’ Solskjaer wants.

They add that ‘the uncertainty at Newcastle, with a proposed takeover imminent and the future of boss Rafa Benitez up in the air, is not thought to be an obstacle to United’s pursuit of Longstaff.’ And that will come as news to the Standard, who say:

‘A potential obstacle to signing Longstaff could be the proposed takeover of Newcastle by Abu Dhabi-based billionaire Sheikh Khaled bin Zayed Al Nahyan.

‘With new owners the St James’ Park club would be under no pressure to sell – particularly not one of their home-grown products.’

But yeah. Sean Longstaff and Scott McTominay dominating midfield, anyone?